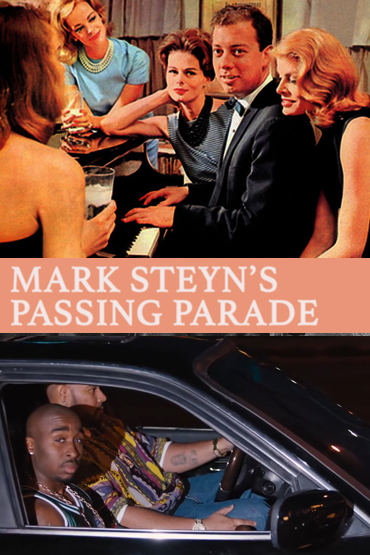 Just ahead of Episode Twelve of Mark Steyn’s Passing Parade, thank you again for all your kind comments about the fourth anniversary of The Mark Steyn Club. Yvonne LeBlanc, a First Month Founding Member, writes:

Enjoy the show and Tales for Our Time, especially Nineteen Eighty-Four…

…but I do feel like I am standing on the Titanic.

There’s a lot of that about, Yvonne – because the Titanic is so symbolically apt of our society: the height of advanced technology and luxurious comfort, and it all sinks in less than three hours. Chairman Xi thinks you’re standing on the Titanic, too.

But we try to maintain a balance here between that sinking feeling and a more positive approach. For example, this weekend’s instalment of Mark Steyn’s Passing Parade offers a study in musical contrasts – first a prematurely deceased pin-up of thug culture, and then a composer who managed to exploit his musical gifts without provoking assassination. The latter, Cy Coleman, is a favorite round these parts, but the former’s demise certainly made more noise:

So where were you when you heard the news that Tupac had been shot?

Statistically, there’s a pretty good chance you were with him: there were 49 assorted boyz’n’hoods and hoes’n’bitches in his entourage, dozens more milling in the street. ‘But nobody saw anything,’ said Sergeant Kevin Manning of the Las Vegas Metropolitan Police Department. ‘Strange, huh?’ Statistically, there’s an even greater chance that you’re one of the thousands who emerged to eulogize him in the press as ‘the James Dean of hip-hop’ – both were talented young men, both died in automobiles (though Tupac was in the passenger seat). The media divided into those who were hip and those caught on the hop: The Village Voice was ready with rap insiders, men with one name (‘Touré’), men with lower-case names (‘dream hampton’, which is not apparently a New York realtor’s designation but a hiphopper who knew Tupac well enough to call him Pac); the squaresville publications were forced to go for the broader brush stroke, getting their middle-class boyz from the ‘burbs to argue, as The Washington Post tried, that he was yet another victim of the Gingrich Terror…

That was still rather unusual a quarter-century ago; now it’s standard operating procedure.

If you’re a member of The Mark Steyn Club you can hear Part Twelve of my serialization of Mark Steyn’s Passing Parade simply by clicking here and logging-in. All previous episodes can be found here.

~As we always say, even on our fourth birthday, membership in The Mark Steyn Club is not for everyone, and we do not seek to conscript the unwilling. In any case, we now provide more free content each week than ever before in our eighteen-year history. That said, aside from Mark Steyn’s Passing Parade and Tales for Our Time, being a Steyn Club member does come with a few other benefits:

~Exclusive Steyn Store member pricing on over 40 books, CDs and other items in the Steyn store;
~The opportunity to engage in live Q&A sessions with yours truly, such as this coming Thursday’s;
~Other members-only series such as Climate Change: The Facts;
~Transcript and audio versions of our video content, such as Mark’s Mailbox and The Mark Steyn Show;
~Comment Club privileges;
~Our Sunday series of video poetry (the latest airs tomorrow) and other specials;
~Advance booking for my live appearances around the world – including the forthcoming third Mark Steyn Club Cruise;
~Customized email alerts for new content in your areas of interest;
~and the opportunity to support our print, audio and video ventures as they wing their way around the world.

To become a member of The Mark Steyn Club, please click here – and don’t forget the perfect present for the one you love: our special Gift Membership.

Please join me next weekend for Part Thirteen of Mark Steyn’s Passing Parade.