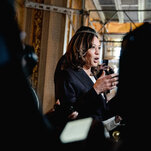 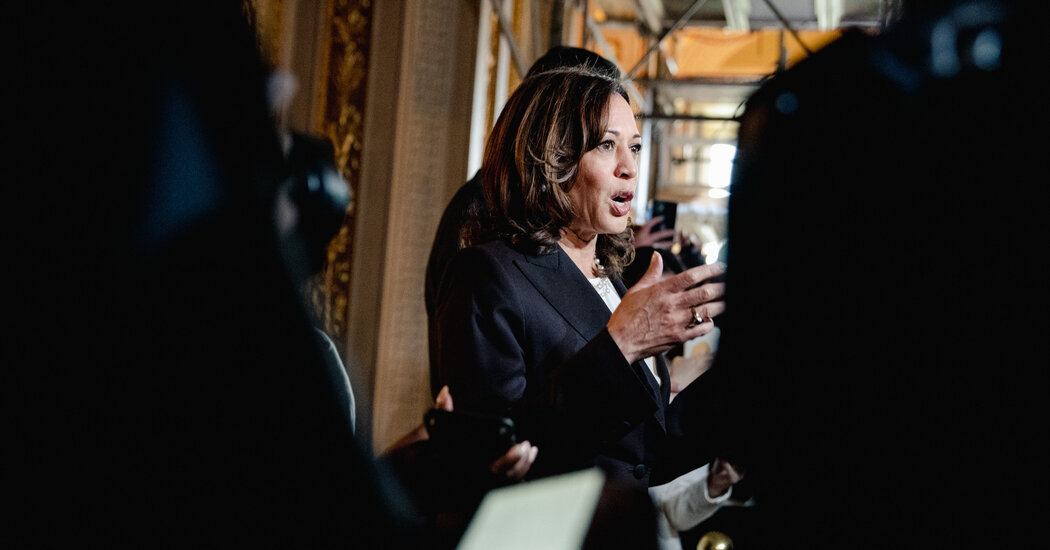 The threat to Roe v. Wade presents Vice President Kamala Harris with an opportunity to recover from early political stumbles.

WASHINGTON — With three words last week, Vice President Kamala Harris inserted herself forcefully into the roiling debate over abortion rights — and may have finally seized on an issue that is popular among key Democratic voters, plays to her strengths and is central to the future of her party.

“How dare they?” she demanded.

Her question — delivered more as a statement of outrage — came in a speech to Emily’s List, an abortion rights group, just hours after the leak of a draft Supreme Court opinion indicating that at least five of the court’s conservative justices were prepared to overturn Roe v. Wade. That would eliminate the constitutional right to privacy that has guaranteed access to abortion for women for more than half a century.

Since then, Ms. Harris, the first female vice president and the former top prosecutor in California, has been among the most outspoken abortion rights voices in the Biden administration. In a commencement speech over the weekend, she decried living in an “unsettled world” where Americans are forced to defend “the rights of women to make decisions about their own body.” On Wednesday, she presided over the Senate as Republicans blocked a Democratic attempt to write Roe’s abortion protections into law.

And on Thursday, Ms. Harris continued to speak out against the draft opinion during a small, on-the-record discussion with reporters who cover gender and women’s issues.

“All Americans should realize that this is a direct assault on the freedom of women. And it is an attack that can affect all Americans,” she told the reporters. “There are some extremist Republican leaders who clearly want to punish and criminalize women. And you have to look no further than some of the laws that have already been passed to know that it’s true.”

Ms. Harris urged people to “understand their power” in ending the careers of politicians who oppose abortion rights.

From Opinion: A Challenge to Roe v. Wade

“I would urge folks to vote for pro-choice candidates at a local, state and federal level,” she said. “There is, at this moment, a time for education, a time for communication and mobilization.”

The threat to abortion rights presents Ms. Harris an opportunity to recover from early political stumbles during her first year in office, including becoming entangled in two of the most difficult debates: immigration and voting rights. President Biden deputized Ms. Harris to take the lead on those subjects, both of which are mired in controversy and delay.

Now, Ms. Harris has a chance to become the voice of the administration on a subject which is complicated for her boss.

Mr. Biden, a lifelong Catholic, was opposed to Roe in the early days of his career and has only later come to embrace abortion rights. But he remains an unlikely champion of the issue. He issued a forceful statement after the draft opinion was revealed by Politico last week. But up to that point he had never said the word “abortion” aloud as president.

By contrast, Ms. Harris has taken several opportunities to be outspoken about the prospect that the court would overturn Roe. Aides to the vice president say she intends to lean into the topic even more aggressively over the next several weeks, as the court gets closer to issuing a final ruling on the case, expected in late June.

Some women’s rights organizations said the potentially historic moment could either make or break her legacy as vice president.

“This is the type of moment that creates leaders, so in my mind I think the question every leader should be asking themselves is where did they want to be? Where were they when this happened?” said Fatima Goss Graves, president of the National Women’s Law Center. “I would hope that everyone in the White House is raising their hand to be engaged.”

For others, the fact that Ms. Harris has stepped into a leadership void is an uncomfortable reminder that she doesn’t have much authority to set in motion any policy proposals. As vice president, she, too, has avoided saying the word abortion and has mostly toed the line of the White House and other Democratic leaders, putting the onus of action on voters, noted Renee Bracey Sherman, founder and executive director of the reproductive-justice group We Testify.

“I wonder how much space she is actually being given to be the best abortion-access champion she could be,” Ms. Bracey Sherman added. “Black women are asking you to do something. To then have a Black woman be the face of the lack of leadership — that feels really frustrating.”

Ms. Harris has a long history of focusing on issues that are of particular importance to women. She served as a district attorney in California, and later as attorney general of the state. In her brief career in the United States Senate, Ms. Harris introduced legislation that focused on improving maternal health. Last fall, Ms. Harris welcomed a group of abortion rights activists and abortion providers for a discussion at the White House.

The State of Roe v. Wade

What is Roe v. Wade? Roe v. Wade is a landmark Supreme court decision that legalized abortion across the United States. The 7-2 ruling was announced on Jan. 22, 1973. Justice Harry A. Blackmun, a modest Midwestern Republican and a defender of the right to abortion, wrote the majority opinion.

What was the case about? The ruling struck down laws in many states that had barred abortion, declaring that they could not ban the procedure before the point at which a fetus can survive outside the womb. That point, known as fetal viability, was around 28 weeks when Roe was decided. Today, most experts estimate it to be about 23 or 24 weeks.

What else did the case do? Roe v. Wade created a framework to govern abortion regulation based on the trimesters of pregnancy. In the first trimester, it allowed almost no regulations. In the second, it allowed regulations to protect women’s health. In the third, it allowed states to ban abortions so long as exceptions were made to protect the life and health of the mother. In 1992, the court tossed that framework, while affirming Roe’s essential holding.

What would happen if Roe were overturned? Individual states would be able to decide whether and when abortions would be legal. The practice would likely be banned or restricted heavily in about half of them, but many would continue to allow it. Thirteen states have so-called trigger laws, which would immediately make abortion illegal if Roe were overturned.

On May 3, Ms. Harris was already scheduled to speak at the Emily’s List dinner. But 24 hours earlier, Politico published the draft opinion. Aides said the tone of the speech completely changed as Ms. Harris sat with her speechwriters to rewrite her remarks.

During the course of those conversations, Ms. Harris repeatedly expressed outrage and surprise at the idea that a majority of the justices would end Roe, asking her aides: “How could they?” and “How dare they?” Her speechwriters urged her to include that phrase in her remarks to the group that night, according to aides.

On Wednesday, the vice president’s role at the Senate was purely ceremonial; nobody expected a close vote that would require her to break a tie.

But she appeared on the Senate dais in a symbolic show of support by the White House. After the vote ended, she took one question from a reporter as a cue to deliver a brief statement about the importance of the midterm elections.

“This vote clearly suggests that the Senate is not where the majority of Americans are on this issue,” she said. “A priority for all that care about this issue — the priority — should be to elect pro-choice leaders.”

Ms. Harris ignored questions about a narrower, alternative proposal put forward by Senators Susan Collins of Maine and Lisa Murkowski of Alaska that also seeks to codify Roe v. Wade, before departing from the Capitol in her motorcade.

Mark Buell, one of Ms. Harris’s earliest fund-raisers since her first race for district attorney in San Francisco, said up until now the Biden administration had not taken full advantage of Ms. Harris’s legal experience when defining her role. He said putting her at the forefront could mark a turning point for the vice president and present an opportunity for her to galvanize Mr. Biden’s supporters.

“This is a positive area she has a deep understanding of,” Mr. Buell said. “And the White House should take advantage of her understanding.”

US economy on brink of recovering its pre-COVID job numbers, but more than half of industries lag

The average gas price is above $4 in every state. How long will they continue to rise?

News DSMW - May 19, 2022
0
More than a month after revealing the revamped version of PlayStation Plus, Sony has shared the initial lineup of games heading to its new service, covering everything from original PlayStation classics and PlayStation Portable titles to modern hits. The new PlayStation Plus has three tiers, each at a discrete price...

News DSMW - May 19, 2022
0
Keeping up with newlyweds Kourtney Kardashian and Travis Barker is turning into a global affair. Less than a week after getting legally married in Santa Barbara, Calif., the couple is... ...

How Kourtney Kardashian and Travis Barker Are Preparing for Their Italian...

‘EVE Online’ now lets anyone play the MMO in a web...