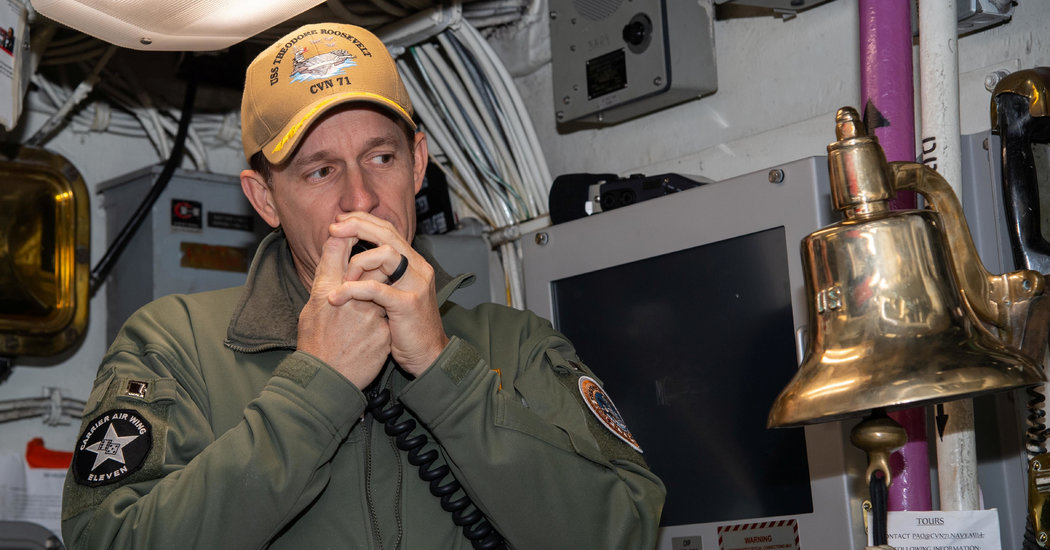 WASHINGTON — For days, he fended off fears that the contagion would spread unchecked through his crew. Then last week, the captain of the aircraft carrier Theodore Roosevelt, who had appealed to his superiors for help, was fired.

By Sunday, friends said, he had come down with the coronavirus himself.

The military has long adhered to a rigid chain of command and tolerated no dissent expressed outside official channels. Capt. Brett E. Crozier, the skipper of the aircraft carrier, knew he was up against those imperatives when he asked for help for nearly 5,000 crew members trapped in a petri dish of a warship in the middle of a pandemic.

But colleagues say the mistake that could cost Captain Crozier his career was charging headlong into the Trump administration’s narrative that it had everything under control.

Pentagon officials said that although President Trump never ordered Captain Crozier dismissed, he was displeased with the captain’s actions and let the Navy know — a sentiment Mr. Trump made very public on Saturday when he lashed out at the captain.

Even so, the Navy’s top brass clashed about what to do.

Adm. Michael M. Gilday, the chief of naval operations, privately urged against dismissal and argued that, per usual Navy procedures, an investigation into what went wrong on the Roosevelt should be allowed to play out. But the acting Navy secretary, Thomas B. Modly, overruled the Navy’s top admiral, saying Captain Crozier had cracked under pressure.

Navy officials acknowledged on Sunday that tensions between Captain Crozier and his immediate boss, Rear Adm. Stuart P. Baker, the commander of a multiship task force including the Roosevelt, most likely complicated the Navy’s response to the viral outbreak and prompted the captain to send a four-page letter pleading for help. Officials said the letter, sent as an unclassified email, went only to other Navy personnel, but it leaked to the news media last week.

Indeed, the Navy hinted at such tensions in a statement on Sunday that the findings of the investigation into what happened aboard the Roosevelt and the chain of command in the Pacific, including its “command climate,” would be submitted to Admiral Gilday on Monday.

According to those who have known Captain Crozier for more than three decades, the picture Mr. Modly paints of their friend and classmate is not one they recognize.

Jeff Craig, who recently retired from the Navy after serving as a captain, including a tour as second in command of the Roosevelt, worked extensively with Captain Crozier after attending the Naval Academy with him. Captain Crozier became a helicopter pilot, Mr. Craig said, earning a nickname that he retained even after he transitioned to flying jets and ultimately to commanding a carrier: Chopper.

“Chopper is one of the best people I have ever known, both professionally and personally,” Mr. Craig, who now works with Amazon’s air cargo division, said in an interview Sunday.

On Sunday, Captain Crozier was in quarantine in Guam, the American territory in the Pacific, dealing with a dry, raspy cough, say people who know him. At least 400 sailors from the Roosevelt who have tested negative for the virus are expected to be sent from the ship to hotels, joining 625 other sailors who have already tested negative.

It is not known when Captain Crozier’s diagnosis was made, or whether the Navy was aware of his infection when he was removed from command, if the medical results came before his punishment.

Friends and colleagues say Captain Crozier, 50, is at peace with a decision that most likely ended a career that vaulted him from the United States Naval Academy to the prestigious job as captain of one of the Navy’s 11 aircraft carriers.

Captain Crozier, a native of Santa Rosa, Calif., started his career flying helicopters. He was then accepted for an exceptionally rare transfer to fly fixed-wing jet aircraft, eventually rising to command an F/A-18 Hornet fighter squadron. From there, he began climbing the nearly decade-long pipeline to command an aircraft carrier.

Captain Crozier entered the Navy’s academically daunting nuclear power school to learn how to run the twin nuclear plants at the heart of a Nimitz-class carrier like the Theodore Roosevelt. Then, he served as the second in command of the carrier Ronald Reagan, and later as the top officer of the Blue Ridge, an amphibious command ship, in Yokosuka, Japan.

But little had prepared the captain, who assumed command of the Roosevelt in November, and his crew for what happened in March.

The carrier was steaming in the western Pacific, ready to respond to any emergency involving North Korea, an emboldened Chinese Navy in the South China Sea or another emerging crisis. On March 24, two weeks after pulling out of a port call in Da Nang, Vietnam, two sailors aboard the Roosevelt tested positive for the coronavirus and were flown to Guam for treatment. Two days later, fearing the scourge of a fast-spreading virus aboard the aircraft carrier, with its cramped quarters for nearly 5,000 sailors, the ship steamed into a previously scheduled stop in Guam, which has a major Navy base and hospital.

Captain Crozier appealed to his superiors for help and Navy officials began responding, but that apparently was not enough.

The tipping point was a four-page letter dated March 30, first reported by The San Francisco Chronicle on Tuesday, in which Captain Crozier laid out the dire situation unfolding aboard the warship. He described what he said were the Navy’s failures to provide him with the proper resources to combat the virus by moving sailors off the vessel.

“We are not at war,” Captain Crozier wrote. “Sailors do not need to die. If we do not act now, we are failing to properly take care of our most trusted asset — our sailors.”

Back at the Pentagon was a furious Mr. Modly, who had moved up from the Navy’s No. 2 job in November after Mr. Esper demanded the resignation of his boss over his handling of the case of a Navy SEAL commando whom Mr. Trump had championed. The acting secretary told reporters last week that the Navy was rushing badly needed supplies to the Roosevelt well before the captain sent his letter to several officers in his chain of command over unclassified email. Mr. Modly said the captain had become “overwhelmed” by the crisis, and said he removed him over a loss of confidence — and not retribution for the letter. Navy officials say they do not know who leaked the letter.

But in removing from command a captain who complained that the Navy was not doing enough to stop the spread of the coronavirus, the Navy opened itself to criticism that it was insufficiently concerned about the health of its sailors. Even though Mr. Modly stressed that he welcomed blunt assessments from subordinate officers, the removal of Captain Crozier could have a chilling effect, several senior officers said.

Online, members of Captain Crozier’s Naval Academy class of 1992 have rallied behind their classmate. Members of the class, most of whom have long since left the military, say their private Facebook group is overflowing with posts and comments in support of the captain. “The volume of posts was almost exponential,” one classmate, Mark Roppolo, said in a telephone interview.

Mr. Craig, who served with Captain Crozier, said he sent his friend an email when the coronavirus started spreading in Asia this winter, wishing him well. He said he received a reply saying thank you, but had not spoken to him since he was relieved of command.

The two men were picked for the Navy’s demanding nuclear power school together in 2012, and Captain Crozier clearly excelled.

“Nuclear power school is a crucible,” Mr. Craig said. “It’s not for the faint of heart. Chopper would stay late, study on weekends, until he could not only pass the tests but had a deep understanding of the concepts behind them.”

Mr. Craig said that during his time aboard the Roosevelt in 2015, the command regularly drilled to react to battle damage, fire and other catastrophes, but never practiced what they would do if infectious disease ravaged the tight quarters of the ship.

“Chopper always had the best interests of his crew forefront. I’m sure that was the case here,” Mr. Craig said. “Chopper’s character is not prone to hasty or uneducated decision making. Anything he did was well thought out.”

Dan Goldenberg, another Naval Academy classmate of Captain Crozier’s, said that “Modly is wrong no matter what.”

“He either made the wrong call in firing Crozier, or if he made the right call, he did a terrible job of explaining it — it’s just illogical,” said Mr. Goldenberg, a retired Navy captain and special assistant to four secretaries of the Navy.

On Sunday, friends say, Captain Crozier found himself sitting alone in the “distinguished visitors quarters” on Naval Base Guam, battling a coronavirus infection, with an unknown next step in a nearly 30-year military career.

The evacuation Captain Crozier sought for his crew is now in motion — one following the rousing send-off they gave him as he left the ship last week.

Hundreds of sailors who tested negative have been evacuated from the ship, which is being disinfected with a skeleton crew aboard to operate the nuclear reactors and other critical functions.

Quarantined sailors are not allowed to leave their rooms. Their meals are placed on the floor outside their hotel doors three times a day, and alcohol and outside food are not allowed in.

These sailors have not even been given keys to their rooms. If they try sneaking out, the doors will lock behind them and they will need a military police officer — one of whom is keeping watch on every floor — to let them back in. They do have access to Wi-Fi and cable television, and are allowed to smoke on their balconies, if their room has one.

Twice a day, hospital corpsmen — the Navy’s medics — visit each room and take the sailors’ temperatures, to watch for potential fevers.

It is not an ending any of Captain Crozier’s friends and academy classmates envisioned.

“Can you imagine devoting your whole life to the Navy as Crozier has, and you make the right call to help your crew, and this happens?” Mr. Goldenberg said. “I’m floored.”