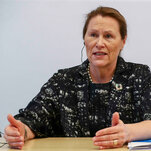 The little-known organization gave out $61 million in loans and grant money to a single British family, in a scandal that has shaken and embarrassed the U.N.

The United Nations secretary general, António Guterres, asked a top official at a U.N. agency to resign on Saturday, shortly after The New York Times published an article describing how the agency had given out $61 million in loans and grant money to a single British family, according to a senior U.N. official.

The United Nations Office for Project Services, a little-known agency for operational projects, ventured into territory no other U.N. agency had entered: teaming up with the private sector for profit in 2015 by operating like an investment bank. Now it may lose as much as $22 million in bad debt, according to U.N. auditors.

The scandal has shaken and embarrassed the U.N., according to several diplomats and staff members, at a time when it is appealing for millions of dollars in aid from donor countries for the war in Ukraine and other crises. An internal investigation into the transactions was completed on Thursday, but its findings have not been released publicly.

The United States, which sits on the executive board of the U.N. agency, said its leadership needed to address the allegations and be held accountable. In a series of tweets on Sunday, Chris Lu, the U.S. ambassador to the U.N. for management and reform, called for a comprehensive review of the agency’s “business model, governance structure, and personnel.”

“At a minimum, we believe that UNOPS leadership missed clear warning signals, failed to provide necessary oversight, and took unacceptable risks with funds,” Mr. Lu tweeted, using the acronym for the Office for Project Services.

An official statement from Mr. Guterres on Sunday said he had accepted the resignation of Grete Faremo, a former minister of Norway and the executive director of the agency, who personally approved the loans. Ms. Faremo had entrusted tens of millions of dollars to a British businessman, David Kendrick, after meeting him at a party in New York City in 2015. Ms. Faremo’s agency also gave a $3 million grant to a group run by Mr. Kendrick’s 22-year-old daughter, Daisy, to raise awareness about threats to the world’s oceans.

Ms. Faremo, in a letter sent to her staff early on Sunday morning and obtained by The Times, offered a different account of her resignation. She said she had submitted her resignation on Friday because “without knowing the full story, it happened on my watch.”

“I acknowledge my responsibility and have decided to step down,” she said.

Ms. Faremo appeared to blame her deputy, Vitaly Vanshelboim, who was placed on administrative leave in December as the U.N. investigated the transactions. After mentioning the investigation and Mr. Vanshelboim, Ms. Faremo said that “a shocking breach of trust hurts, and it has shaken the organization profoundly.”

But the senior U.N. official, who asked not to be named because he was not authorized to speak on the record, said Ms. Faremo was told to resign. Mr. Guterres, the official said, decided to act swiftly after the Times article ran in an attempt to restore the trust of donor countries in the organization.

Lebanon’s ambassador to the U.N., Amal Mudallali, tweeted: “Unbelievable!! Who hires these UN officials? Why there is no oversight!!,” with a link to the Times article.

In fact, both Ms. Faremo and Mr. Vanshelboim were among the highest-ranking officials at the U.N. and were appointed by Mr. Guterres.

In his statement, Mr. Guterres said he was grateful for Ms. Faremo’s commitment and dedication to the organization. Her resignation was effective as of Sunday. Mr. Guterres appointed an interim director, Jens Wandel, while he searches for a replacement, the statement said.

Mr. Wandel “has had a clear record of working on U.N. reform,” said Farhan Haq, the deputy spokesman for the U.N. Mr. Wandel, an old U.N. hand from Denmark, where the headquarters of the agency are located, was most recently the special adviser to Mr. Guterres on reforms.

It remains unclear whether Mr. Wandel will have the mandate in his temporary role to initiate meaningful reforms. A senior U.N. official said any reform or restructuring of the agency would be at the discretion of its executive board, which consists of a group of member states that include the United States.

Mr. Lu said on Sunday that the executive board had demanded a full briefing with the agency that would take place shortly.

A spokeperson for the U.S. mission at the U.N. said that a board briefing had been scheduled for May 16 before Ms. Faremo resigned on Sunday and that the board was preparing for it pending further notice.

In a separate statement on Sunday, the U.N. agency said it did not have access to the internal U.N. investigation report and eagerly awaited its findings. It said it was “already implementing continuity plans to ensure Ms. Faremo’s departure will not affect regular project activities.”