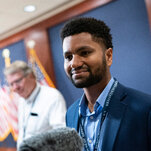 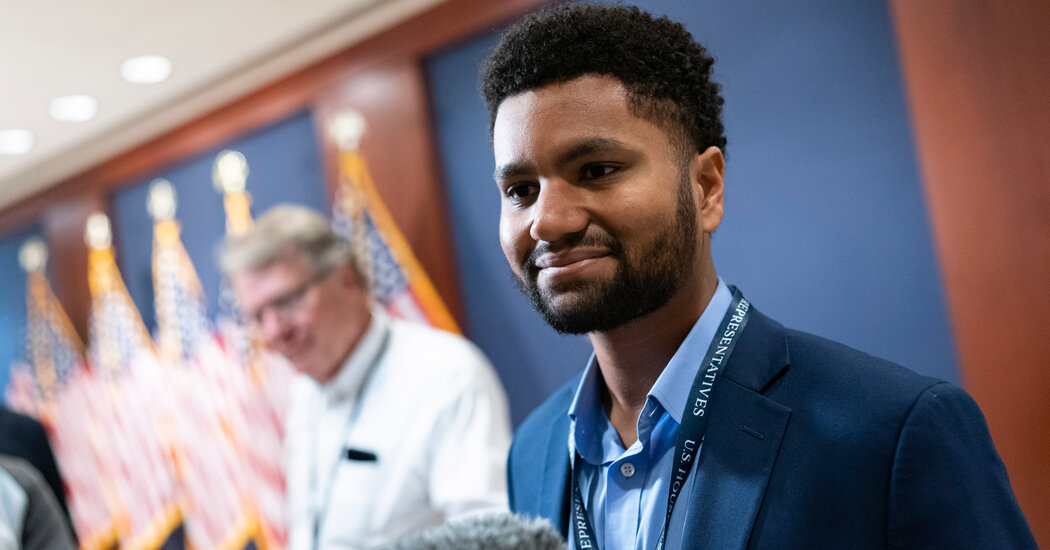 Maxwell Alejandro Frost, a Democrat who won a House race in Florida, will soon be the youngest member of Congress and its first denizen of Generation Z.

Don’t let his tender age fool you: Maxwell Alejandro Frost has been doing this for a while.

Frost was only 15 when the Sandy Hook shooting horrified him and inspired him to get involved in political activism; he flew to Connecticut as a high school kid to figure out how he could help. A decade later, as a not-so-grizzled veteran of various progressive causes, he will soon be the youngest member of Congress — and its first denizen of Generation Z.

Frost, who turns 26 in January, won his safely Democratic seat in Orlando after dispatching two former members of Congress, a state senator and a pastor in a fierce primary. And if he has stars in his eyes about filling the shoes of Representative Val Demings, a former police chief who made a futile run for Senate against Marco Rubio, he betrayed little of it in an interview last week.

Frost said his freshman orientation was “surreal” — training sessions with the House Progressive Caucus and the A.F.L.-C.I.O., dinner at the Library of Congress, a midnight tour of the Capitol. But as the national organizing director for March for Our Lives, the Gen Z anti-gun-violence group, he is no stranger to Washington’s corridors of power.

“I’ve never been on the House floor,” Frost said. “But I’ve been in the office buildings, I’ve been in the Capitol. I’ve been coming up here pretty often since 2012, which is the Sandy Hook shooting. And I would come every year for the vigil for all victims of gun violence.”

Frost has already hired a veteran Capitol Hill operator as his chief of staff and is putting together the rest of his team in Washington and back home in Orlando. Progressive leaders like Benjamin Jealous, the former N.A.A.C.P. president, and Senators Elizabeth Warren and Bernie Sanders have embraced him as one of their own.

But Frost is most eager to get to work on the issue that brought him to Washington: addressing gun violence. He wants Congress to invest in programs to engage young people in music or boxing — anything to keep them out of trouble. Maybe, he thinks, he can find some bipartisan support for his ideas even while Democrats are in the minority in the House.

“What I learned in March for Our Lives is that when we invest in them, No. 1, they help end gun violence a lot quicker and it’s more effective because it’s community based,” he said, referring to young people. “And on top of that, when law enforcement isn’t involved at that early stage, you get your kids out of that school-to-prison pipeline.”

The Aftermath of the 2022 Midterm Elections

A moment of reflection. In the aftermath of the midterms, Democrats and Republicans face key questions about the future of their parties. With the House and Senate now decided, here’s where things stand:

Biden’s tough choice. President Biden, who had the best midterms of any president in 20 years as Democrats maintained a narrow hold on the Senate, feels buoyant after the results. But as he nears his 80th birthday, he confronts a decision on whether to run again.

Is Trump’s grip loosening? Ignoring Republicans’ concerns that he was to blame for the party’s weak midterms showing, Donald J. Trump announced his third bid for the presidency. But some of his staunchest allies are already inching away from him.

G.O.P leaders face dissent. After a poor midterms performance, Representative Kevin McCarthy and Senator Mitch McConnell faced threats to their power from an emboldened right flank. Will the divisions in the party’s ranks make the G.O.P.-controlled House an unmanageable mess?

A new era for House Democrats. Speaker Nancy Pelosi, the first woman to serve in the post and the face of House Democrats for two decades, will not pursue a leadership post in the next Congress. A trio of new leaders is poised to take over their caucus’s top ranks.

Divided government. What does a Republican-controlled House and a Democratic-run Senate mean for the next two years? Most likely a return to the gridlock and brinkmanship that have defined a divided federal government in recent years.

He also learned how to think fast on his feet. When March for Our Lives became involved in lobbying Virginia state legislators to pass new gun safety laws, the group grew alarmed when it started getting death threats as protesters wielding assault rifles prepared to block entry to the Capitol in Richmond.

Instead of holding a rally as planned, Frost and his fellow organizers found sympathetic lawmakers who let them sleep in their offices so that they were already inside the building the next morning.

Since his election, Frost has been soliciting advice. Loads of it. From friends. From his new colleagues. From Demings, who advised him to stay focused on the people who elected him. “As a leader of my community,” Frost said, he is constantly asking himself, “‘How am I going to build power for 2024 and for the future battles?’”

To do this, Frost went on, he wants to apply some of the lessons he learned as an activist — what he calls “bridging the gap between cool and consciousness.”

March for Our Lives did this, he said, by using “every tool in the toolbox.” Not just holding protests and registering young people to vote, but bringing in artists, cultural leaders and other influencers to make political engagement appealing to a younger crowd. It’s the kind of trick that’s easier to pull off when you’re a 25-year-old jazz drummer and music obsessive than, say, Steny Hoyer.

The 117th Congress that is just now wrapping up its term? It’s the oldest in history. Nearly a quarter of its members are over 70. And while Democrats are planning to bring along new leadership, their likely next House leader, Representative Hakeem Jeffries, is 52 — old enough to be Frost’s father.

Already, Frost is fielding questions about whether he intends to be just another backbencher, or whether he can serve as some kind of cultural ambassador.

He’s thinking about making “a guide or something” to help Democrats communicate better with younger voters. And eventually, he wants to travel to other members’ districts to make guest appearances at town hall events aimed at young people.

Frost is thinking about not just his generation but also the next one. He wants to hold events for 13-year-olds who cannot yet vote but might someday form the backbone of the progressive movement.

To do that, he argued, Democrats will need to break free from the defensive crouch in which they often find themselves.

“I think our party shouldn’t be afraid of talking about bold, transformational change, things that maybe we won’t get tomorrow,” Frost said. “It’s what we’re fighting for. It’s the world we believe in. Because I think especially young folks, they want something to vote for, not against.”

What to read tonight

Thank you for reading On Politics, and for being a subscriber to The New York Times. — Blake

Read past editions of the newsletter here.

If you’re enjoying what you’re reading, please consider recommending it to others. They can sign up here. Browse all of our subscriber-only newsletters here.

Have feedback? Ideas for coverage? We’d love to hear from you. Email us at onpolitics@nytimes.com.