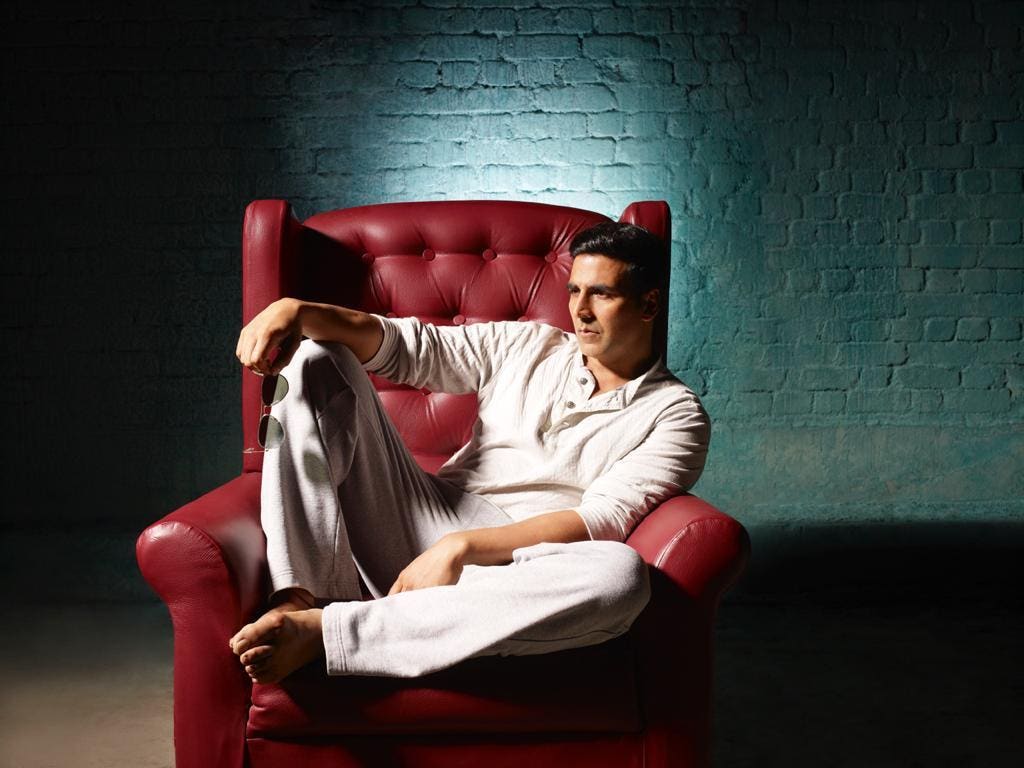 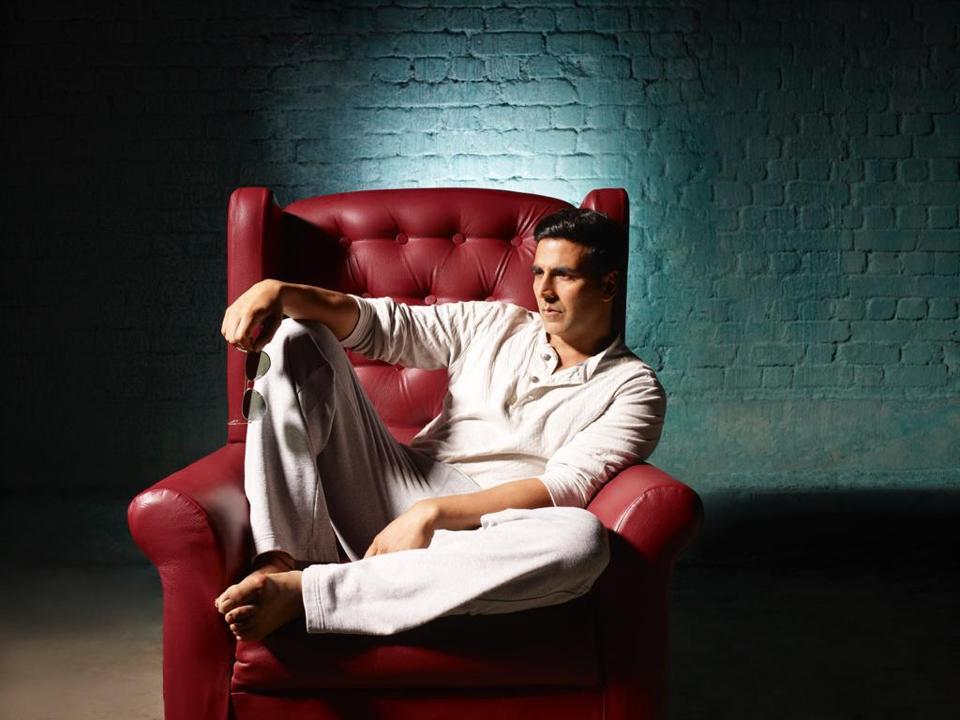 India’s top movie star is doing his best to keep busy. Locked down at home along with much of the country, Akshay Kumar has been shooting TV commercials with his niece operating the camera, working the phones to coordinate $4.5 million of pandemic relief pledges and fine tuning scripts.

He’s also binge-watching TV, burning through episodes of Money Heist and After Life on Netflix NFLX , The Family Man on Amazon AMZN , and, for his seven-year-old daughter, Sugar Rush, a baking show. The choices may seem odd for a superstar who’s built a lucrative business by rebuffing Hollywood. But these are not normal times, not even for the king of Bollywood. Kumar, after decades of declining offers from U.S. producers, reversed course and last year signed a deal to star in the upcoming Amazon Prime AMZN series, The End.

“You have to change with the times,” Kumar says during an hour-long facetime interview from his apartment, stopping occasionally to mediate a spat between his daughter and her older brother. “From screenplays and scripts to technology and the way of shooting and the audience. The zeros in my check have changed. Everything has changed.”

The deal, which Forbes estimates is paying Kumar $10 million, has everything to do with the overturned balance of power in American filmed entertainment. Having seized the narrative in Hollywood, technology giants from the north have rewritten the rules of the movie business at home and, momentum in hand, are turning to India, the world’s second-largest movie market.

Indian moviegoers have long flustered the major U.S. movie studios, showing up for its biggest releases but showing a lopsided preference for local fare. India produces more films than any other country, and last year delivered a record box office of $1.3 billion. Hollywood fare sells—Avengers: End Game was the highest-grossing film last year—but Bollywood dominates, accounting for six of the ten top-grossing films.

Big Tech is looking past the theaters at a target-rich environment more suited to their business models. India is home to 1.35 billion people, most of whom are under the age of 35, a demographic that is expected to increase the business for online video almost three-fold to $4 billion in five years, according to research consultancy Media Partners Asia. Netflix and Amazon started streaming there in 2016 and launched Indian original content in 2018 and 2017, respectively. The pair are already putting out 10% of India’s original productions, according to a report from consulting firm Omdia, spending more than $500 million on local content in the past two years with an equal amount expected this year.

“Amazon and Netflix have been in a localization arms race for India,” says Tony Gunnarsson, one of the Omdia analysts behind the report. “Localization is hugely important everywhere but in Asia, it’s even more important. It’s not just about having content in the local language with subtitles or dubbing.”

Which makes Kumar a highly valuable asset—and one who can hold out for the richest of offers. The local superstar lands at No. 52 on this year’s Celebrity 100 with pretax earnings of $48 million, the vast majority of it having nothing to do with Hollywood. 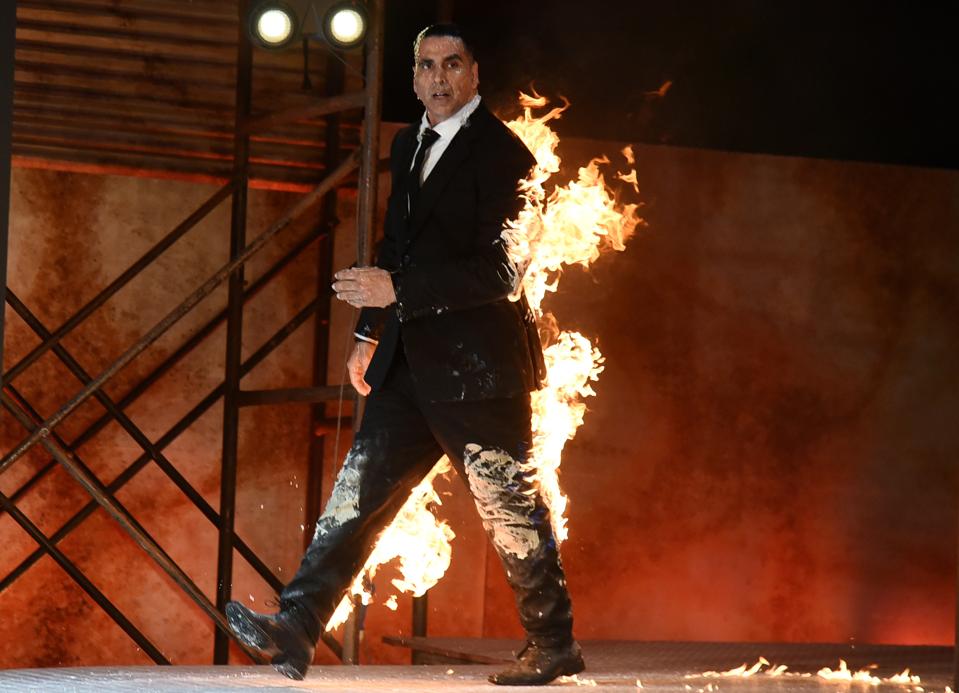 Kumar stayed true to his reputation as an action star, performing a fire stunt during the … [+] announcement of the upcoming series ‘The End.’ (Photo by Sujit Jaiswal / AFP) (Photo by SUJIT JAISWAL/AFP via Getty Images)

Kumar was born in 1967 and raised in Punjab by an accountant father and a stay-at-home mother who, despite modest means, would take the family to the movies every Saturday. He was drawn to the martial arts movies: First it was Bruce Lee, then Jackie Chan, eventually more mainstream action heroes like Sylvester Stallone and Arnold Schwarzenegger. As a child, he devoted more time practicing karate and taekwondo than doing schoolwork; his father even borrowed money so her could spend five years studying muay thai in Thailand. When he returned to Mumbai as a 22 year old, he started teaching martial arts and modeling to make money. He quickly saw where opportunity lied: muay thai paid $66 a month; modeling paid four times that in three hours.

“As luck would go, they liked my face,” he says.

He was hired to do his first film in 1992 by Bollywood Director-Producer Pramod Chakravarthy, the lead role in Deedar, a love story. It took less than a year for his breakthrough role to come in the musical thriller Khiladi, setting him up for a career as an action star.

“I entered this industry thinking I just wanted to earn money. I just wanted to earn around 10 crore rupees (about $1.3 million today), that’s it. But I’m a human being, and when I made my first ($1.3 million), I thought, why can’t I make 100 crores ($13 million),” he says with a slightly embarrassed smile. “To be honest there was no stopping me.”

Indeed. Kumar’s lucrative local deals are a contrast to the reality for most international stars, who need to make it in Hollywood to score the same kind of big-money paydays. Kumar commands $13 million up front for films like the upcoming Bell Bottom and Bachan Pandey, and this year out-earned Brad Pitt and Tom Cruise. He makes even more on projects when he takes a risk, forgoing salary for a percentage of revenue, once the gold-standard deal for Hollywood’s A-list that the U.S. studios have long since abandoned.

And now Hollywood is coming to him, checkbook in hand. Or, at least, New Hollywood, which is following the strategy satellite services used when they were expanding in India, grabbing ratings boosts by signing on stars like Salman Khan and Amitabh Bachchan as game show hosts.

Amazon hopes Kumar’s star power can give a leg up to Prime Video in the world’s second largest marketplace for programming, boosting a business that has trailed Netflix in the west in subscribers and cachet. And he’s not the only one. Netflix recruited stars Saif Ali Khan and Nawazuddin Siddiqui for its first ever original series Sacred Games, while Amazon hired Abhishek Bachchan—the son of Amitabh Bachchan—to headline its series Breathe.

“It’s about what people want to see,” says James Farrell, VP of International Originals for Amazon. “If they want to see Akshay Kumar in a multiseason, action thriller, who am I to say watch this instead? It may not be cheap, but it’s worth it.”

Amazon hasn’t broken out its number of subscribers in India, though it has said that most subscribers in India get Prime for the streaming, not for free delivery or other benefits. The strategy appears to be working. Media Partners Asia predicts it will have 17 million paying subscribers by the end of the year, second only to Disney DIS Plus Hostar, which will have 18 million, thanks in part to its rights to air Indian cricket. Netflix is lagging at 5 million paying subscribers, making India one of only a handful of markets where it isn’t the biggest player.

Since Prime launched in India, Amazon has released 16 original series including musicals, romances and thrillers. Inside Edge, its drama about a cricket team, became the first Indian show to be nominated for a Best Drama award at the International Emmys. Last year, Netflix launched a lower-priced plan in India meant only for smartphones. It hopes the plan will compete with the less expensive services from Amazon and Disney, whose Disney+ Hotstar  could reach 100 million subscribers in India by 2025, according to the Media Partners Asia report.

“In India, the potential for growth is huge … and it’s mostly underestimated,” Kumar says, admitting that it was his teenage son who prompted his deal with Amazon when he asked why he wasn’t working on a “digital” series. “The way Indian audiences have matured and content has evolved is huge, and I want to be a part of it.”