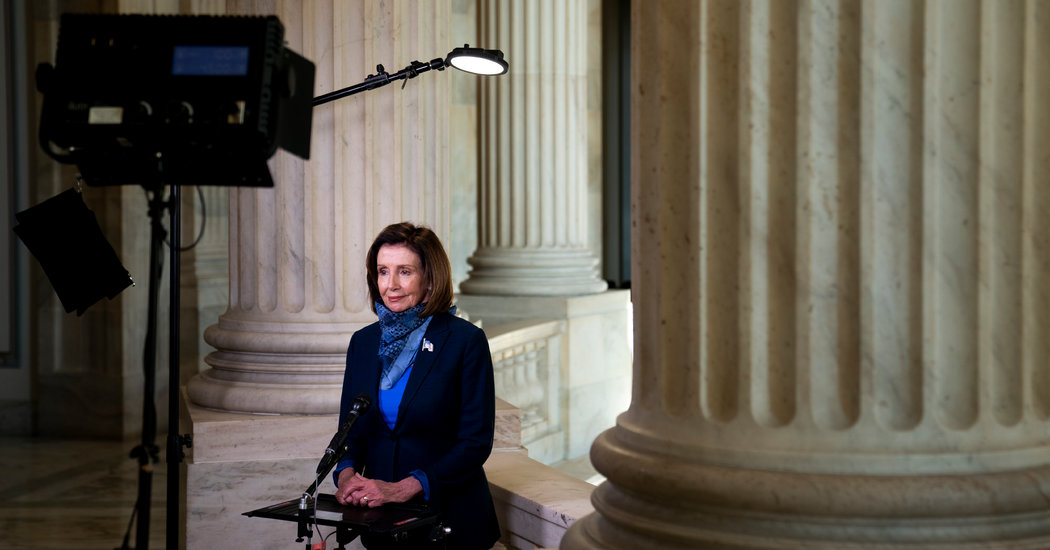 WASHINGTON — Democratic leaders backed away on Wednesday from a plan to change the rules of the House of Representatives to allow lawmakers to cast votes remotely for the first time in history, after Republicans who are clamoring to reopen Congress registered their sharp opposition.

Speaker Nancy Pelosi told Democrats on a conference call that the House would no longer vote on Thursday as planned on a proposal to allow members to designate another lawmaker to cast votes for them by proxy, according to two officials familiar with the announcement. Instead, she said she and Representative Kevin McCarthy of California, the Republican leader, would have a bipartisan group of lawmakers consider remote voting proposals and plans to reopen the House.

The turnabout on Wednesday, just a day after the vote was announced, underscored how bitterly partisan the debate over remote voting has become. The fight mirrors those raging across the nation as governors struggle to balance the economic pain and disruption of shuttering their states with public health guidelines to deal with the coronavirus pandemic, and small but angry protests reflect a fierce strain of conservative disaffection with the restrictions.

President Trump has stoked that anger, tweeting his support for protests of state-issued stay-at-home-orders.

In a letter on Tuesday, Mr. McCarthy called on Ms. Pelosi to work with him to create “a clear, safe and effective plan for reopening Congress,” and argued that lawmakers’ jobs were “essential work” that should continue during the pandemic.

“I think we can agree that our institution’s current posture cannot and should not become the norm,” he wrote.

Ms. Pelosi announced the decision to delay the move to remote voting after speaking with Mr. McCarthy for just over an hour, according to a leadership aide who said she had reversed course to ensure that such a monumental change to the rules would be bipartisan.

“The message sent was, ‘Republicans were not included; we are against this proposal because it hasn’t been put together in a bipartisan way,’” Representative Rodney Davis of Illinois, the top Republican on the Administration Committee, said of the conversation between the two leaders. “It would throw out over 200 years of precedent without so much as a discussion with Republicans.”

In his letter, Mr. McCarthy suggested that proxy voting could be subject to “potential abuses of power,” and could lead to “centralized decision-making” that would reduce lawmakers’ role to merely voting “yes” or “no” on proposals into which they had had no input.

Some Republicans have chafed in recent days at the notion that remote voting was needed at all, arguing that lawmakers should return to Washington to conduct business as usual. Several were agitating to stage a protest of sorts on the House floor this week, to demand answers from Democrats about when Congress would resume normal operations.

“If we can have our ambulances, our health care workers and folks in grocery stores and all of those brave Americans out there taking those risks, I’m ready to take those risks, too,” said Representative Michael Waltz, Republican of Florida. “I can’t overstate how desperate things are becoming. We have to get to work.”

Democratic leaders, after initially expressing reluctance to upend House rules to accommodate remote legislating, framed the proxy voting arrangement as a common-sense solution that would allow lawmakers to do their jobs while following public health guidance.

As the pandemic has taken hold, Congress has shifted into a nebulous state — not quite shuttered but not in regular session either — with both chambers taking extended recesses and returning only to pass legislation on a consensus basis, hoping that, given the extraordinary circumstances, nobody would object. That precarious arrangement is increasingly untenable as mounting partisan divisions over how to respond to the crisis make broad legislative agreements less and less likely.

At the same time, many states have put in place strict social distancing restrictions, and public health experts are still advising people to avoid unnecessary travel and congregating in large groups, making the idea of a return to Washington by 435 House members problematic.

“This virus has forced us to do things in different ways and become radically different in many respects for the safety and security of the health of all of our country,” Representative Steny H. Hoyer, Democrat of Maryland and the majority leader, told reporters on Tuesday. “Therefore, we have to look at ways that perhaps we can still accomplish our business, but do it in a way that is safe and secure for our members.”

But he also said any decision to adopt a remote voting policy should be bipartisan, and made in consultation with Republican leadership, a position he said he had shared with the Rules Committee.

“We don’t want that to be perceived as trying to get some partisan gain by providing for that alternative,” Mr. Hoyer said.

Efforts to adopt similar remote voting procedures in the Senate are unlikely to be successful. An attempt by Senator Rand Paul to change the rules to allow it was stymied on Tuesday by his fellow Kentucky Republican, Senator Mitch McConnell, the majority leader.

The action came just after the Senate passed its latest coronavirus relief package — a $484 billion bill to replenish a depleted small-business loan program and provide funds for hospitals and testing — with only a half-dozen senators on hand for a voice vote, the only option since most senators were not in Washington.

“I do think that the next time we pass a coronavirus rescue bill, we need to have everyone here and everyone engaged,” Mr. McConnell said afterward.