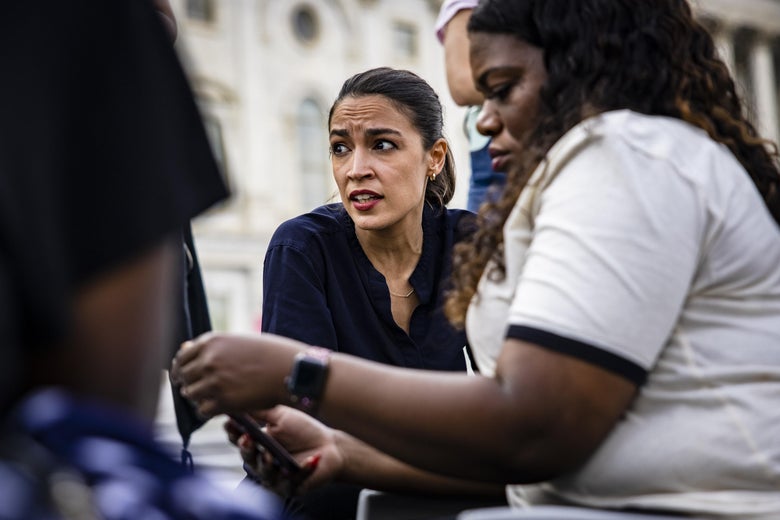 Last Thursday, as the House of Representatives was wrapping up lingering business before leaving town for the summer, the White House threw a grenade into Democratic leaders’ laps. You know that CDC eviction moratorium that was set to lapse at the end of July—as in, a few days later? The White House would need Congress to pass legislation extending that, immediately.

The July 31 deadline has come and gone, with neither Democrats in Congress nor the White House having extended it. This could leave millions without housing as landlords resume what they lovingly call “property operations.” And while congressional Democrats and the administration are still in conversations about what they can do, the main battle plan for each participant appears to be ensuring that the blame for the ensuing mess sticks to someone else.

This is unusual territory for House Democratic leaders, who have operated as a pretty well-oiled machine for most of the year. The team of Speaker Nancy Pelosi, Majority Leader Steny Hoyer, and Majority Whip James Clyburn has passed just about everything asked of it, despite the narrowest of majorities. Pelosi has not had to turn to Minority Leader Kevin McCarthy for votes on anything.

But the White House request last Thursday was too much. Leaders began whipping that night and could not find the votes, with too many moderates dead-set against another extension. Pelosi issued a letter to the Democratic caucus Thursday night pleading with them to come around, to no avail.

The efforts to find the votes continued through Friday. But in the end, Hoyer tried to pass an extension through unanimous consent, Republicans blocked it, and members started for the airport. When Democratic leaders came to brief the press and pin blame on Republicans, though, they were met with a scene that was not indicative of a party in array. Pelosi and Hoyer waited just feet from California Rep. Maxine Waters, chairwoman of the Financial Service Committee, until she finished explaining why she thought they “should’ve fought harder.”

Amazing scene here as Pelosi and Hoyer wait to speak as Rep. Waters says this wasn’t the right way to handle it pic.twitter.com/QnUrxncX6X

Now, Democratic congressional leaders would never outright say that their dear friends in the Biden administration had thrown them under the bus at the last minute. But it’s not an accident that the first sentence of her letter to colleagues last Thursday pleading with them to pass an extension began, “In the last 24 hours, a challenge to the conscience of the Congress has descended upon us.” And in her remarks to reporters following the failed unanimous consent effort on Friday, Pelosi noted that, “we only learned of this yesterday,” and “there was not enough time to socialize it within our caucus as well as to build a consensus necessary.” New York Rep. Alexandria Ocasio-Cortez noted on CNN this weekend, too, that the White House had dithered on making its position known until the last minute.

“I sit on the Financial Services Committee, which has jurisdiction over housing,” Ocasio-Cortez said Sunday. “We had the housing secretary there, asking about the administration stance. We asked the Biden administration about their stance. And they were not being really forthright about that advocacy and that request until the day before the House adjourned. And so the House was put into, I believe, a needlessly difficult situation.”

Still, progressives were, and are, furious at their colleagues. Missouri Rep. Cori Bush slept on the Capitol steps to protest Congress leaving for seven weeks without getting this done. And while AOC placed some blame with the White House, she also questioned the leaders’ strategy, saying in that CNN interview that  it’s not good enough to just let Republicans block a unanimous consent request and claim the wave of evictions is their fault.

“We have to really just call a spade a spade,” she said. “We cannot in good faith blame the Republican Party when House Democrats have a majority.” She, and others, are calling for the House to return to pass an extension.

If we’re calling spades spades, though, here’s what the House passing an extension either last week, or sometime in the future, would likely get renters who are on the precipice of eviction: nothing. It would take 60 votes to pass this in the Senate, which already has more than it can handle this week, and Senate Republicans are  not interested. If House Democrats were able to pass an extension, it would allow them to shift blame to Senate Republican obstructionists. But that doesn’t pay the rent.

In her most recent updates to colleagues, Pelosi has noted that “the House passing the eviction moratorium without the Senate acting does not extend the moratorium.” Instead, Pelosi and House leaders have tried to throw the question back at the administration, and have repeatedly called on them in the last couple of days to have the CDC extend the moratorium.

If the administration were confident it could, though, it would. The issue is that it very likely cannot. Real estate interests had challenged the CDC-issued eviction moratorium in court, and it only survived until July 31 by the skin of its teeth. Supreme Court Justice Brett Kavanaugh, in a concurring opinion in late June, agreed with the challengers that the CDC had “exceeded its existing statutory authority by issuing a nationwide eviction moratorium,” but wouldn’t shoot it down because there were only a few weeks left. He added, though, “clear and specific congressional authorization (via new legislation) would be necessary for the CDC to extend the moratorium past July 31.” The White House has been clear that it does not believe the CDC has the authority to extend it any further, and doesn’t want to try and risk additional  legal backlash.

And yet, everyone’s still trying. The White House issued a new statement Monday saying that while the CDC so far “has been unable to find legal authority for a new, targeted eviction moratorium,” the White House would be “redoubling efforts to identify all available legal authorities to provide necessary protections.” In the meantime, it will be taking steps encouraging everyone to be nice, such as “challenging every landlord to hold off on evictions for the next 30 days.”

The urgency with which these statements are being issued does at least suggest that Democrats in both the administration and Congress recognize they’re on the verge of a screw-up that won’t soon be forgotten. The eviction moratorium can’t last forever, but it sure could use a couple more months. Congress has authorized $46.5 billion in rental assistance in COVID relief packages, but only a tiny fraction of that has gone out the door as states and localities have struggled to get programs off the ground. An extension of the moratorium in some fashion, while the delta variant is surging, would allow the assistance to be disbursed, more renters to stay in their homes and more landlords to get paid. Instead, there could be a rush of evictions of those who were promised help from the federal government but never got it because of implementation issues. This is the sort of thing that can breed resentment for a long time, and it was worth preparing for more than two days before the deadline.