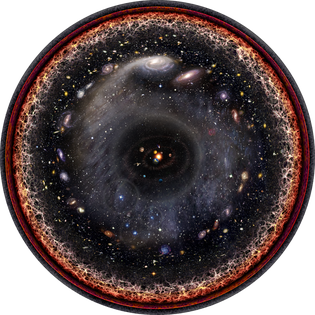 Artist’s logarithmic scale conception of the observable universe. Galaxies give way to large-scale… [+] structure and the hot, dense plasma of the Big Bang at the outskirts. This ‘edge’ is a boundary only in time.

If you were to go as far out into space as you can imagine, what would you encounter? Would there be a limit to how far you could go, or could you travel a limitless distance? Would you eventually return to your starting point, or would you continue to traverse space that you had never encountered before? In other words, does the Universe have an edge, and if so, where is it?

Believe it or not, there are actually three different ways to think about this question, and each one has a different answer. If you consider how far you could go if you:

you can figure out how far it is to the edge. In each case, the answer is fascinating.

We often visualize space as a 3D grid, even though this is a frame-dependent oversimplification when… [+] we consider the concept of spacetime. In reality, spacetime is curved by the presence of matter-and-energy, and distances are not fixed but rather can evolve as the Universe expands or contracts.

The key concept to keep in mind is that space isn’t how we normally conceive of it. Conventionally, we think about space as being like a coordinate system — a three-dimensional grid — where the shortest distance between two points is a straight line, and where distances don’t change over time.

But both of those assumptions, so thoroughly good in our everyday lives, fail spectacularly when we begin looking at the larger-scale Universe beyond our own planet. For starters, the idea that the shortest distance between two points is a straight line falls apart as soon as you start introducing masses and energetic quanta into your Universe. Because spacetime is subject to curvature, which the presence of matter and energy is the cause of, the shortest distance between two points is inherently dependent on the shape of the Universe between those points.

Instead of an empty, blank, three-dimensional grid, putting a mass down causes what would have been… [+] ‘straight’ lines to instead become curved by a specific amount. In General Relativity, we treat space and time as continuous, but all forms of energy, including but not limited to mass, contribute to spacetime curvature. If we were to replace Earth with a denser version, up to and including a singularity, the spacetime deformation shown here would be identical; only inside the Earth itself would a difference be notable.

Christopher Vitale of Networkologies and the Pratt Institute

In addition to that, the fabric of spacetime itself does not remain static over time. In a Universe filled with matter and energy, a static, unchanging Universe (where distances between points remain the same over time) is inherently unstable; the Universe must evolve by either expanding or contracting. If Einstein’s General theory of Relativity is correct, this is mandatory.

Observationally, the evidence that our Universe is expanding is overwhelming: a spectacular validation for Einstein’s predictions. But this carries with it a series of consequences for objects separated by cosmic distances, including that the distance between them expands over time. Today, the most distant objects we can see are more than 30 billion light-years away, despite the fact that only 13.8 billion years have passed since the Big Bang.

The farther a galaxy is, the faster it expands away from us and the more its light appears… [+] redshifted. A galaxy moving with the expanding Universe will be even a greater number of light years away, today, than the number of years (multiplied by the speed of light) that it took the light emitted from it to reach us. But we can only understand redshifts and blueshifts if we attribute them to a combination of motion (special relativistic) and the expanding fabric of space (general relativistic) contributions both.

When we measure how distant a variety of objects are from their physical and luminous properties — along with the amount that their light has been shifted by the Universe’s expansion — we can come to understand what the Universe is made of. Our cosmic cocktail, at present, consists of:

When you combine these effects together, you get a unique and unambiguous prediction for how far it is, at all times past and present, to the edge of the observable Universe.

A graph of the size/scale of the observable Universe vs. the passage of cosmic time. This is… [+] displayed on a log-log scale, with a few major size/time milestones identified. Note the early radiation-dominated era, the recent matter-dominated era, and the current-and-future exponentially-expanding era.

This is a big deal! Most people assume that if the Universe has been around for 13.8 billion years since the Big Bang, then the limit to how far we can see will be 13.8 billion light-years, but that’s not quite right.

Only if the Universe were static and not expanding would this be true, but the fact is this: the farther away we look, the faster distant objects appear to speed away from us. The rate of that expansion changes in a way that is predictable based on what’s in the Universe, and in turn, knowing what’s in the Universe and observing how fast objects expand tells us how far away they are. When we take all of the available data together, we arrive at a unique value for everything together, including the distance to the observable cosmic horizon: 46.1 billion light-years.

The observable Universe might be 46 billion light years in all directions from our point of view,… [+] but there’s certainly more, unobservable Universe, perhaps even an infinite amount, just like ours beyond that. Over time, we’ll be able to see more of it, eventually revealing approximately 2.3 times as many galaxies as we can presently view.

This boundary, however, is not an “edge” to the Universe in any conventional sense of the word. It is not a boundary in space at all; if we happened to be located at any other point in space, we would still be able to detect and observe everything around us within that 46.1 billion light-year sphere centered on us.

This is because that “edge” is a boundary in time, rather than in space. This edge represents the limit of what we can see because the speed of light — even in an expanding Universe governed by General Relativity — only allows signals to travel so far over the Universe’s 13.8 billion year history. This distance is farther than 13.8 billion light-years because of the Universe’s expansion, but it’s still finite. However, we cannot reach all of it.

The size of our visible Universe (yellow), along with the amount we can reach (magenta). If we… [+] accelerated at 9.8 m/s^2 for approximately 22.5 years and then turned around and decelerated for another 22.5 years, we could reach any galaxy within the magenta circle, even in a Universe with dark energy, but nothing outside of it.

E. Siegel, based on work by Wikimedia Commons users Azcolvin 429 and Frédéric MICHEL

Beyond a certain distance, we can see some of the light that was already emitted long ago, but will never see the light that is being emitted right now: 13.8 billion years after the Big Bang. Beyond a certain specific distance — calculated (by me) to be approximately 18 billion light-years away at present — even a signal moving at the speed of light will never reach us.

Similarly, that means that if we were in an arbitrarily high-powered rocket ship, all of the objects presently contained within this 18 billion light-year radius would be eventually reachable by us, even as the Universe continued to expand and these distances continued to increase. However, the objects beyond that would never be reachable. Even as we achieved greater and greater distances, they would recede faster than we could ever travel, preventing us from visiting them for all eternity. Already, 94% of all the galaxies in the observable Universe are beyond our eternal reach.

As vast as our observable Universe is and as much as we can see, it’s far more than we can ever… [+] reach, as only 6% of the volume that we can observe is presently reachable. Beyond what we can observe, however, there is certainly more Universe; what we can see represents only a tiny fraction of what must be out there.

And yet, there is a different “edge” that we might want to consider: beyond the limits of what we can observe today, or even what we can potentially observe arbitrarily far into the future, if we run our theoretical clock towards infinity. We can consider how large the entire Universe is — the unobservable Universe — and whether it folds in on itself or not.

The way we do this is to take the most distant signals of all, such as the light that’s left over from the Big Bang, and examine in detail how the fluctuations are patterned. If the Universe is curved in either a positive or a negative direction, the fluctuation patterns that we observe will wind up distorted to appear on either larger or smaller angular scales, as opposed to a flat Universe.

When we take the best data available, which comes from both the cosmic microwave background’s fluctuations and the details of how galaxies cluster together on large scales at a variety of distances, we arrive at an inescapable conclusion: the Universe is indistinguishable from perfect spatial flatness. If it is curved, it’s at a level that’s no more than 0.4%, meaning that if the Universe is curved like a hypersphere, its radius is at least ~250 times larger than the part that’s observable to us.

The magnitudes of the hot and cold spots, as well as their scales, indicate the curvature of the… [+] Universe. To the best of our capabilities, we measure it to be perfectly flat. Baryon acoustic oscillations and the CMB, together, provide the best methods of constraining this, down to a combined precision of 0.4%.

This doesn’t necessarily mean that the Universe is infinite, though. It could be flat and still curve back on itself, with a donut-like shape known mathematically as a torus. As large and expansive as the observable Universe is, it’s still finite, with a finite amount of information to teach us. Beyond that, the ultimate cosmic truths still remain unknown to us.

In a hypertorus model of the Universe, motion in a straight line will return you to your original… [+] location, even in an uncurved (flat) spacetime. The Universe could also be closed and positively curved: like a hypersphere.