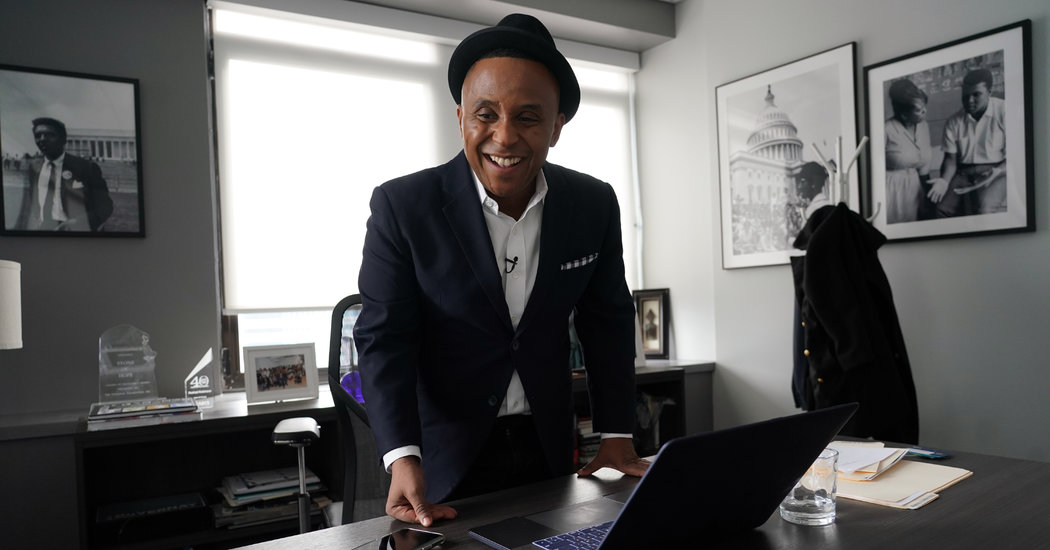 Rashad Robinson is the president of Color of Change, a racial justice organization. Lately, he has been busy interviewing Democratic presidential candidates — Bernie Sanders on “Medicare for all,” Pete Buttigieg on criminal justice reform and Elizabeth Warren on corporate accountability, for instance — for Color of Change’s podcast, “Voting While Black.”

When he’s not behind a microphone, he is busy heading up other initiatives, like getting black voters involved in local races for prosecutors and district attorneys. He recently produced a report on TV crime procedurals and their tendency to distort how the criminal justice system interacts with black America.

Since Mr. Robinson took charge of Color of Change in 2011, its membership has increased to 1.7 million from 650,000. Mr. Robinson, 41, lives alone in a two-bedroom apartment on the Upper West Side.

HOP TO IT Compared with my friends, I’m a pretty early riser. I’m up by 7, 7:30. Definitely 8. The first thing I do is probably scan the news, CNN and MSNBC, and read some emails. I’m not eating breakfast right now because I’m doing an intermittent fast. My trainer comes between 8 and 9. We go downstairs to the gym in my building.

MAINTENANCE It’s an hour workout. The gym doesn’t have huge weights, so I’m doing a lot of circuit training, a lot of high intensity cardio and stuff that can keep up my flexibility, because I’m on and off a lot of planes. I have to work out a lot. I’m going a lot of places where there’s good food and I’m 5-foot-3, so the weight will show up quick and I like the clothes I have, so I need to stay in them.

WORKING TITLE After the workout I come upstairs and get a shower. Sometimes I’ll have a media hit to do right after that, or sometimes I try to get some work done. Right now I’m in a real back-and-forth trying to finish my book proposal. The working title is “Not Just Loud.” It’s about how to make change in an era of a lot of noise. Everyone says the proposal is the hardest part, and I close my eyes when people say that. They are correct.

THE GODFATHER I do like a brunch, and I’m probably in a position to break my fast around noon if I stopped eating at 8 the day before. So I’ll figure out a friend or two to have brunch with, sometimes a friend with kids because I love kids and I don’t have them. I’m like a godfather sometimes. I’m going to go to Harlem for brunch — Boulevard or Melba’s or Red Rooster. I make a reservation on Thursday because I don’t want to wait in a two-hour line.

CUSTOMIZED If I’m drinking at brunch, a cocktail or champagne, that means I don’t have a media hit later and that will be a moment when I go look at hats. I like clothes. I like aesthetics. My Insta can give you a visual of how I think about clothes. But I’m not the kind of person who’s going to shop with you for hours and hours. I get things tailored, because as a 5-foot-3 person with wide shoulders, I can’t go in and get things off the rack.

COLLECTED I love hats, I have a wall of hats — it’s like my problem — and I have a favorite hat shop. It’s Goorin Brothers Hat Shop on Bleecker and Christopher. I have a benefits card and probably two free hats waiting for me. Also, people give me gift certificates. My friend who runs United We Dream gave me one. I need to use it.

ON HIS OWN Generally on the weekends I really like to cook. I grew up cooking. I’ll have seven, eight, nine people over to my apartment, friends or activists who are in town for work. I’ve taken a lot of cooking classes, so if someone is vegan or only eats certain things I’ll try to have something for them. Honestly that’s fun for me. A lot of my job is working in collaboration with people, so cooking gives me a chance to be in my own head and do something on my own, start to finish.

DIGESTIFS The food hits the table at 8 or 8:45. People stay as long as they can. Sometimes we go to a little gay bar up the street called Suite. It’s very old-school, a real neighborhood bar. It’s like Cheers for me — they know I drink Tito’s, and if they’re running low they let me know.