If getting a smart display intrigues you, the first question you have to ask yourself is whether you’d rather be in Amazon’s ecosystem or Google’s. If you have a lot of Google products in your home, like Nest thermostats or Nest cams, then a Google-powered model makes more sense. If you have Amazon products, like a Fire TV Stick or a Ring cam, then obviously Amazon would be a better choice. Of course, it’s perfectly acceptable to have products from competing companies in the same home, but just realize they might not work well with each other.

Aside from that, both systems do offer unique features. Google, for example, works best if you have an existing Google account and use services like Calendar and Photos. In fact, we especially love Google smart displays because they work really well as digital photo frames. You can set it up to automatically pull in pictures of friends and family from your Google Photos library, and the algorithm is smart enough to use what it thinks are the best shots — so less chance of blurry photos or images of your eyes half-closed showing up, for example. It seems like a small thing, but seeing as the display is on standby 90 percent of the time, its secondary function as a digital photo frame is very welcome. All Google Smart Displays also support YouTube and YouTube TV, step-by-step cooking instructions and all of the usual benefits of Google Assistant, like weather reports. As with Assistant on the phone, it also has voice recognition, so only you can see your calendar appointments and not others.

Amazon’s smart displays, on the other hand, are slightly different. Instead of YouTube, they offer several more video options, like Amazon Prime, NBC and Hulu. They also come with two browsers — Silk and Firefox — which you can use to browse the web or watch YouTube videos, which you wouldn’t be able to do otherwise. They offer step-by-step cooking instructions as well, thanks to collaborations with sources like SideChef and AllRecipes. In fact, the cooking instructions sometimes come with short little video clips, which aren’t on Google’s version. But though you can use Amazon’s displays as digital photo frames as well, the process is not quite as intuitive, and it lacks that smart photo-sorting algorithm that Google has. By default, Amazon’s displays tend to show the latest headlines instead of photos, which aren’t as visually appealing.

Smart displays come in all sorts of shapes and sizes, and some are best suited to certain rooms in the home more than others. So while we do have our favorite overall picks, we’ve also compiled a list of smart displays that would suit specific use cases and preferences as well.

If you lean Google (our preference) 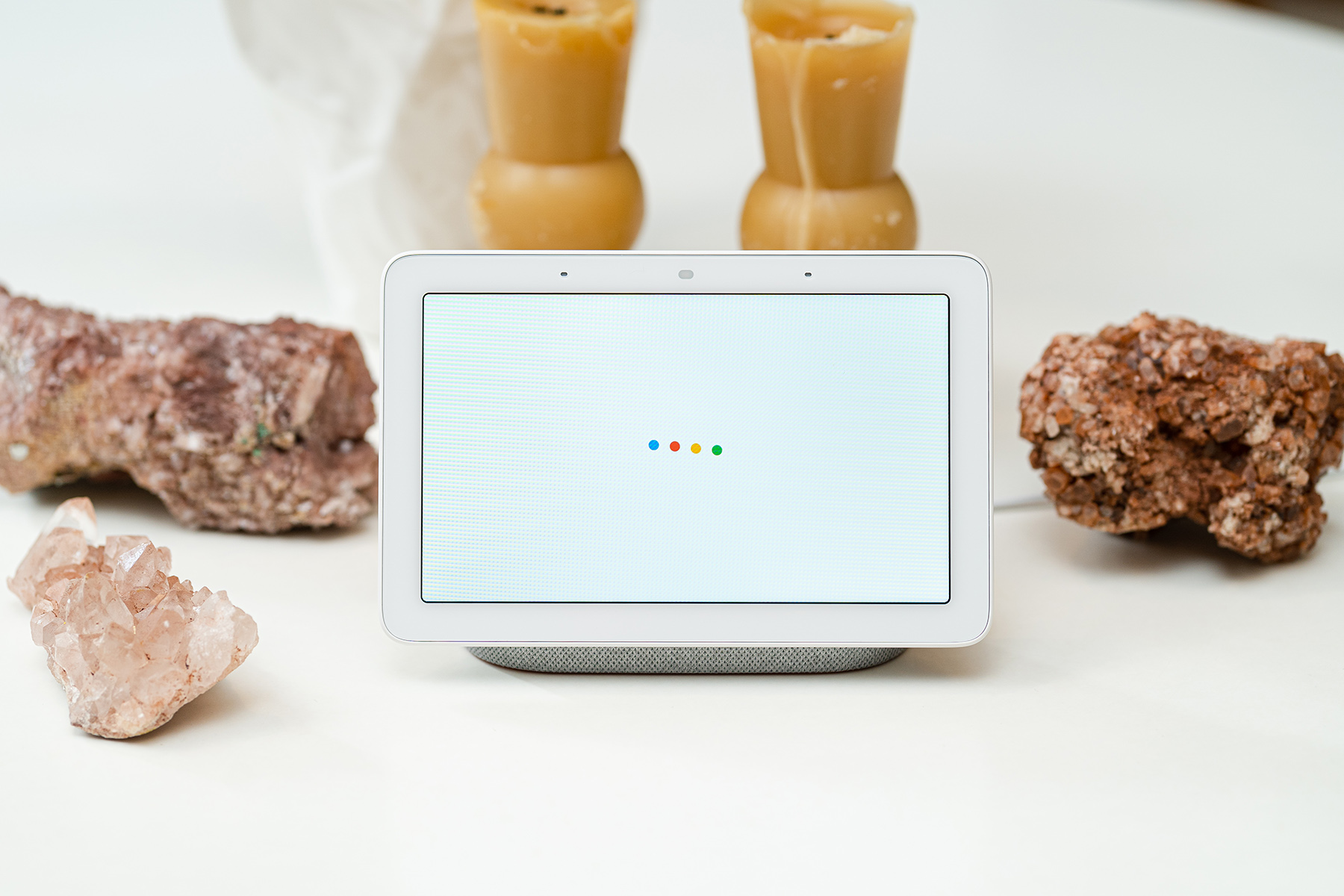 We tend to prefer Google Smart Displays because most people are likely already entrenched in the Google ecosystem due to the ubiquity of Google services like Gmail, Calendar and so forth. We also tend to find Google assistant to be a little smarter than Alexa, especially when bringing up answers from the web. As mentioned above, we also really like the tie-in with Google Photos and the smart photo-sorting algorithm.

Our favorite smart display overall is Google’s Nest Hub. Its 7-inch size is a better fit in more rooms, and its unobtrusive design combined with its soft fabric exterior blends nicely into your existing home decor. It does everything we think most people would want in a smart display, like YouTube videos, step-by-step cooking instructions, smart home controls and the ability to check in on your Nest cams if you have any. An ambient light sensor helps to detect the light and color temperature of the environment and adjusts the screen to match.

Another feature of the Nest Hub is actually a lack of one: It doesn’t have a camera. That gives it that additional layer of privacy that many people covet, and it’s also a lot more suitable for personal spaces like the bedroom. Sure you could also cover up a camera with a shutter, but with the Nest Hub, you don’t have to remember to do that. 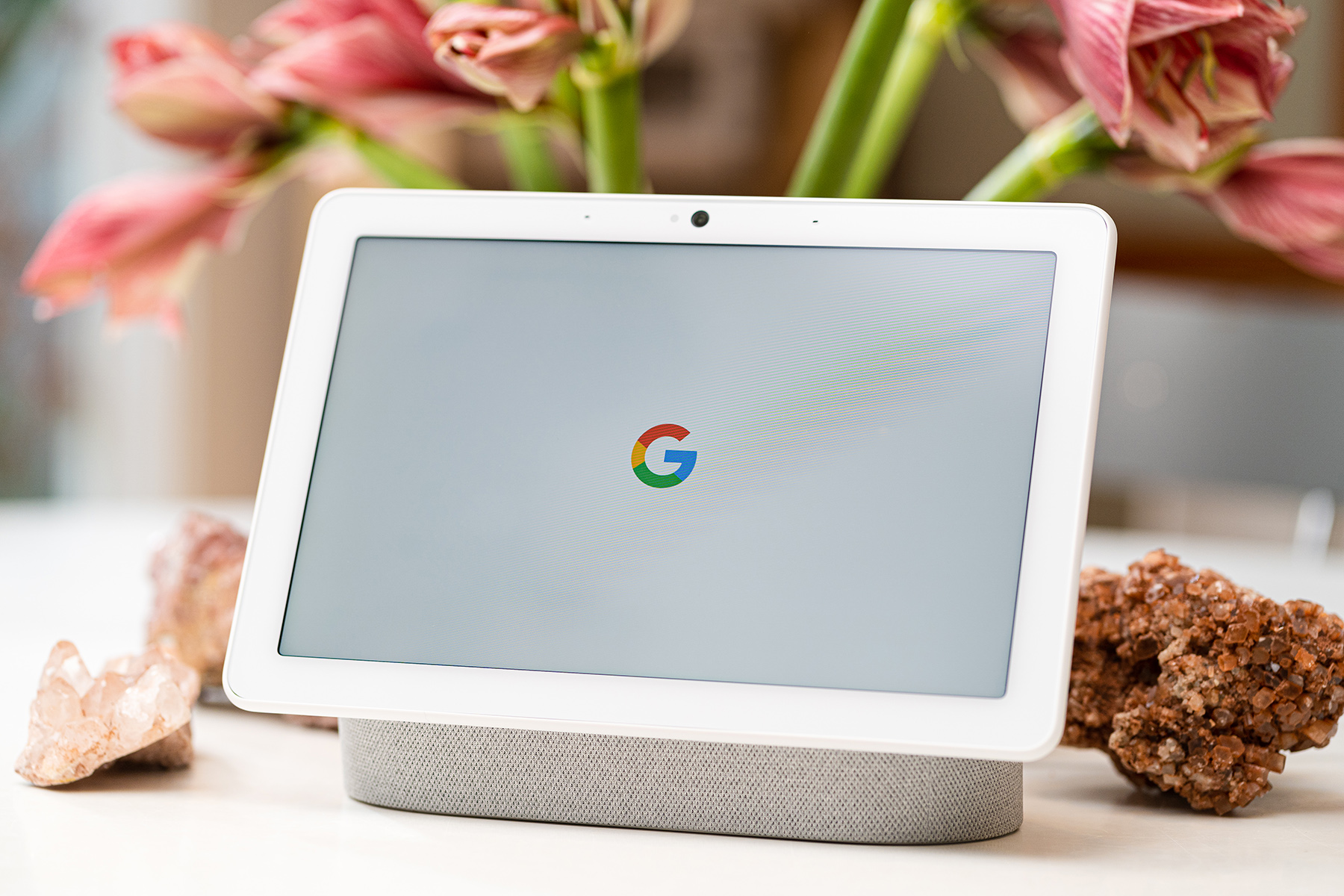 If you like Google but you miss having a camera for video calls, or you just prefer a bigger screen, then you might want to consider the Google Nest Hub Max. At 10-inches instead of seven, it works a lot better for watching videos from YouTube and YouTube TV. It’s especially useful in the kitchen, where it functions as a kind of second television, and you can see more of those step-by-step cooking instructions at a glance. The bigger screen also means a larger photo frame, which you may prefer.

As mentioned, the Nest Hub Max adds a camera to the mix. It doesn’t have a physical shutter, which is a concern, but you can shut it off with an electronic switch. You can use the camera for video calls with Google’s Duo service, and it can also function as a Nest Cam to help you keep an eye on your house when you’re away. Another benefit of the camera is the addition of Face Match facial recognition for authentication purposes, which we found to be a little more accurate than just using Voice Match.

Last but not least, the Nest Hub Max’s camera also adds a unique gestures feature that lets you play and pause media simply by holding up your hand to the screen. It’s not entirely necessary, but it’s potentially useful if you’re in a noisy environment and just want the music to stop without having to shout over everyone. 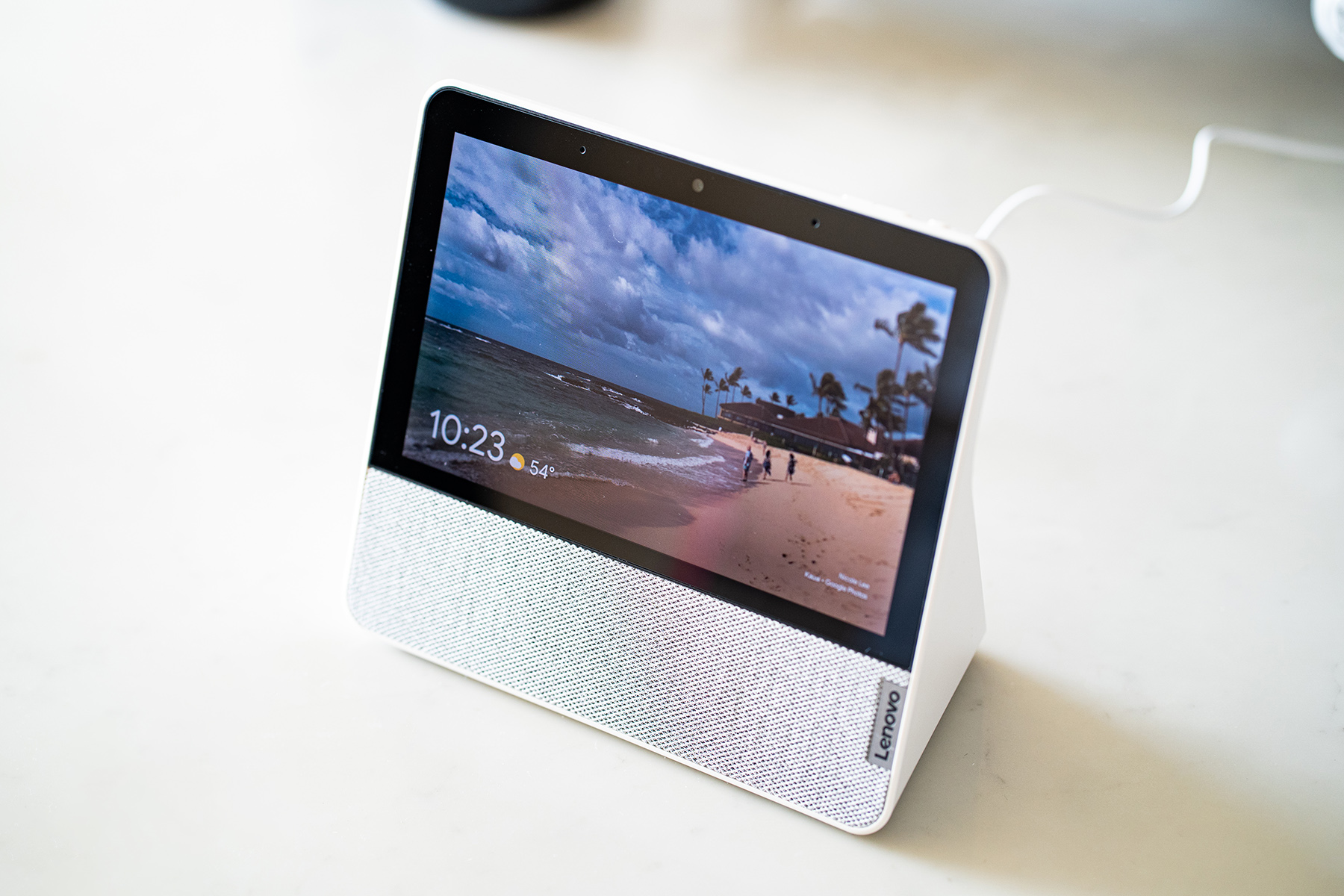 Another Google display alternative is the Lenovo Smart Display 7, which uses the same Google Smart Display operating system but with a slightly different design aesthetic. Lenovo’s version has a front-firing speaker that sits underneath the display, which offers much louder sound than Google’s offerings. It still has that simple, all-white minimalist appeal, but it looks much less like a photo frame and more like a mini TV set.

If you lean Amazon 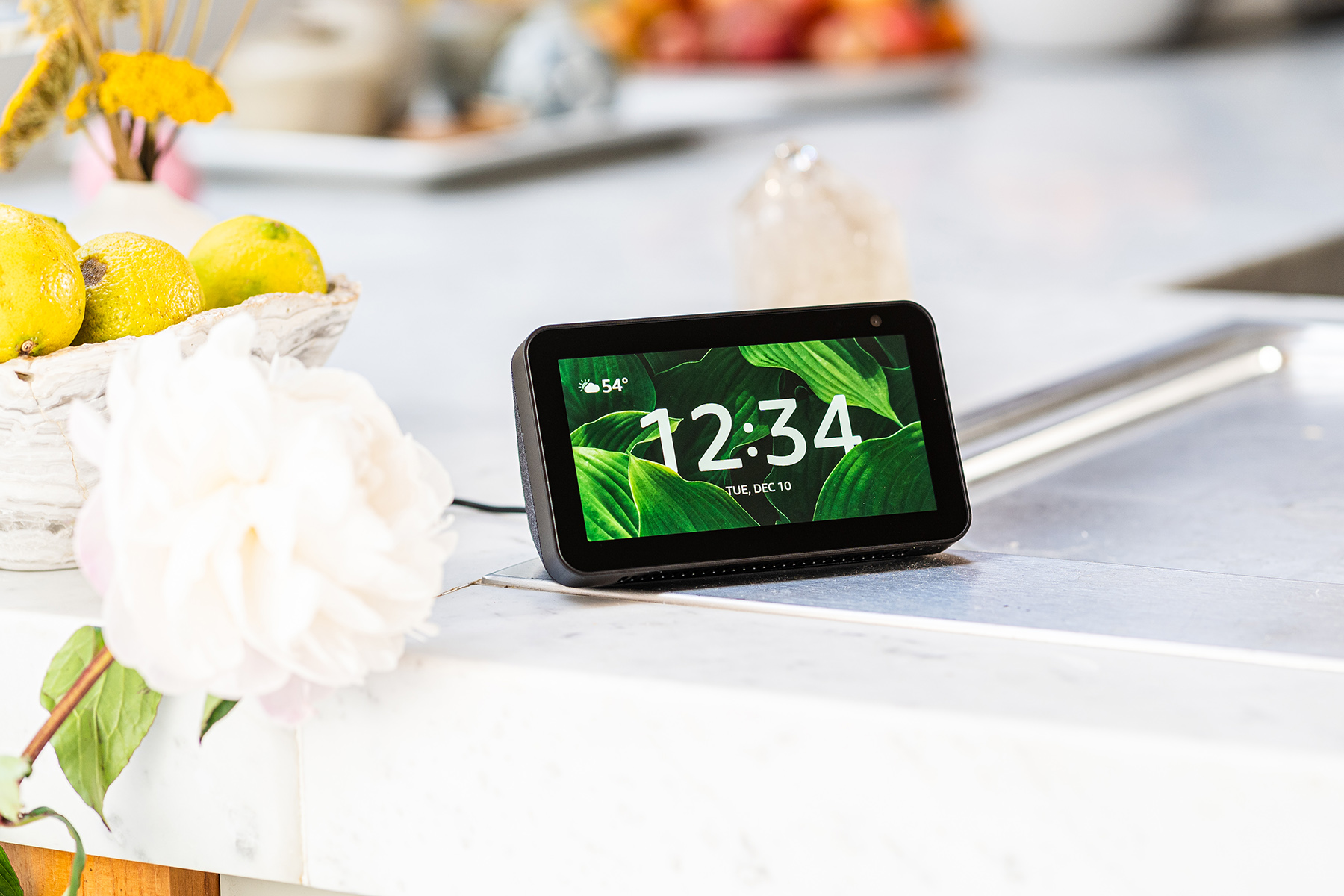 Our favorite Amazon smart display is the Echo Show 5. At only 5.5-inches wide, it’s one of the smallest smart displays on the market, and as a result, will work nicely on a desk or a night stand. In fact, one of the reasons we like the Echo Show 5 so much is that it doubles as a stellar smart alarm clock. It has an ambient light sensor that’ll adjust the screen’s brightness automatically, a tap-to-snooze function so you can whack the top of it for a few extra minutes of shut-eye, plus a sunrise alarm which slowly brightens the screen to mimic the effects of daylight’s arrival.

Like all other Amazon smart displays, the Echo Show 5 does have a camera, which might make you a touch queasy if you are privacy conscious. Still, it does have a physical camera cover to alleviate some of those concerns. You can use the camera for video calls between other Echo smart displays, and with Skype as well, which is a lot more popular than Google’s Duo service at this time. 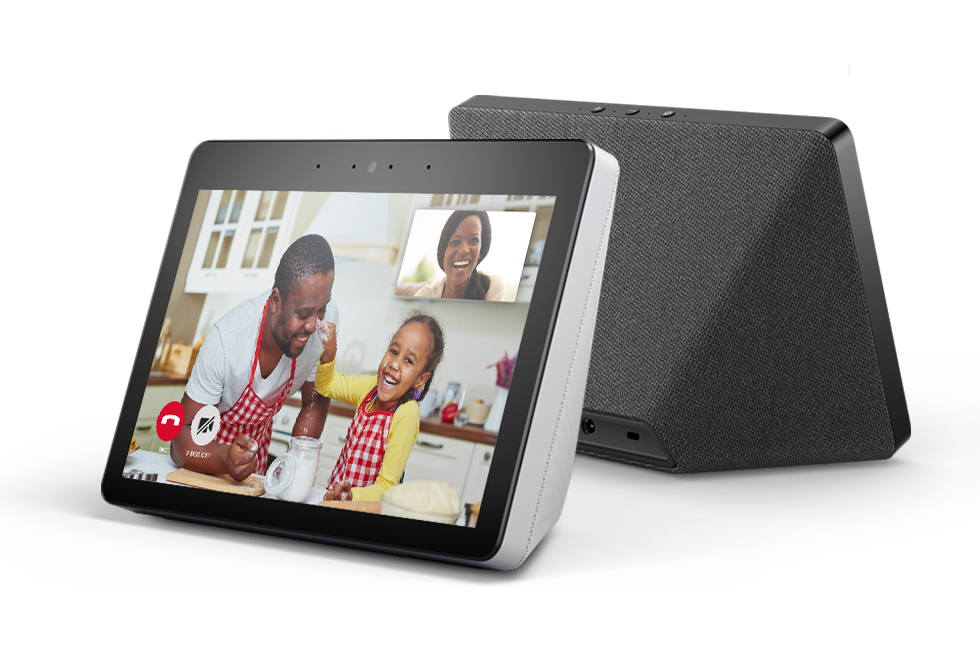 Amazon also offers bigger smart displays with better sound if you’d rather have your smart display in a communal environment, like the kitchen or the living room. They are the second-gen Echo Show, which measures 10-inches wide, and the Echo Show 8, which is 8-inches wide. Aside from larger screens, both of the larger Echo Shows also feature superior sound, with deeper bass and a fuller, richer tone. The Echo Show 8 also offers a sunrise alarm like the smaller 5, but it lacks the tap-to-snooze functionality.

If you want it to be a tablet too 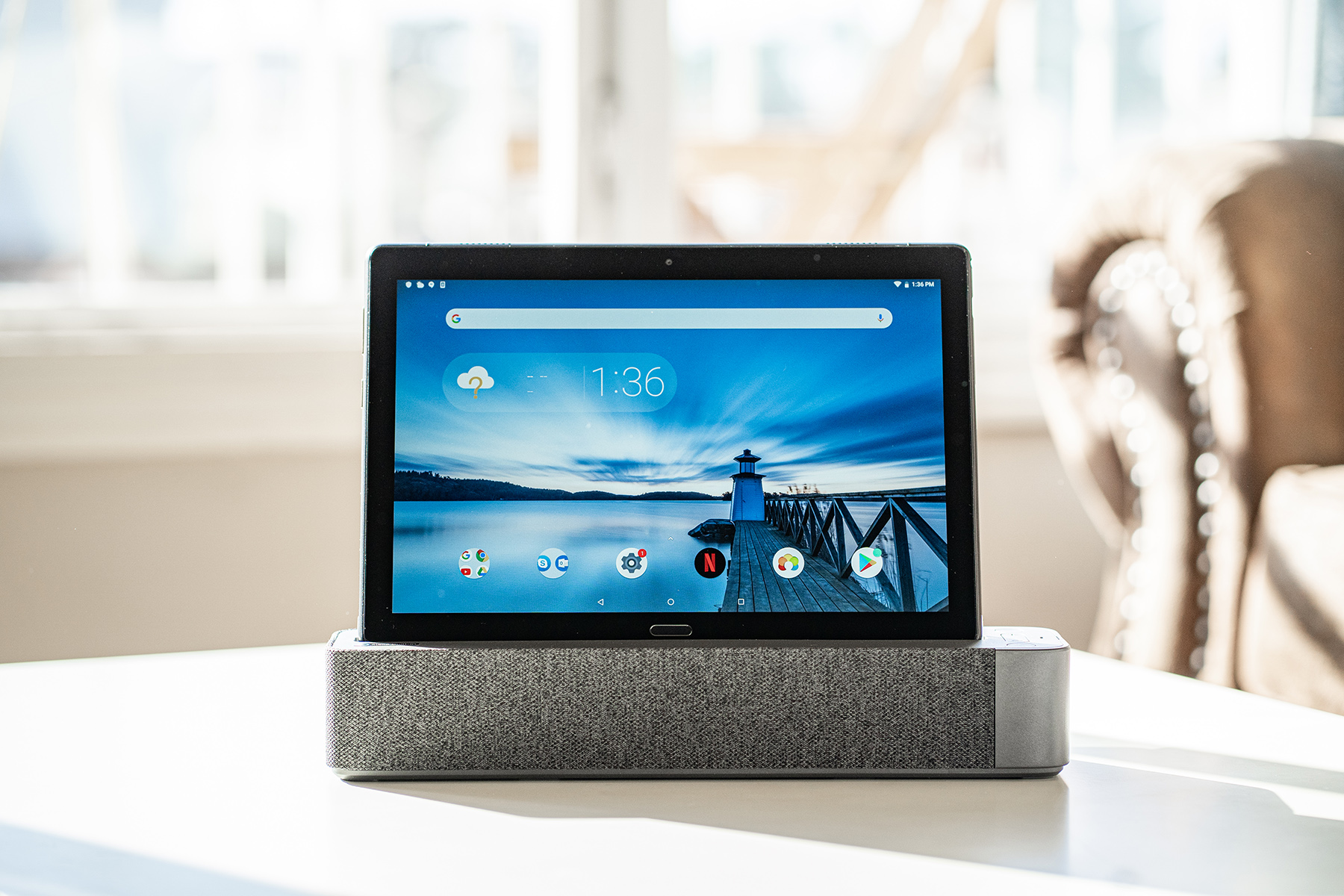 If you’d prefer a multi-functioning device instead of a standalone smart display, there are 2-in-1 devices out there that can convert from Android tablet to smart display and vice versa. The Lenovo Smart Tab M10 ($200) and P10 ($250) are both Android tablets that can switch over to an Alexa Smart Display once placed into a Bluetooth speaker dock (the P10 is the slightly elevated version, with a sleeker, glass design.)This gives a new purpose to an otherwise stagnant Android tablet when not in use. On its own, it’s not a very interesting Android tablet, but as both a smart display and an Android tablet, it’s quite a compelling proposition.

If you’d rather have a Google-powered smart display, Lenovo does offer the Yoga Smart Tab ($250) and the Smart Tab M8 ($120, coming soon), which are both Android tablets that can transform over to Google’s Pixel Stand UI, which is very similar to a smart display. The Yoga Smart Tab has a built-in kickstand that props up the slate for easy viewing and will automatically switch over to that Pixel Stand interface. The same goes for the M8 when it’s placed in its accompanying charging dock. Unfortunately, at this time, we haven’t tried both of them out for an extended period of time and hesitate to recommend them because of that.

If what you really want is a smart alarm clock 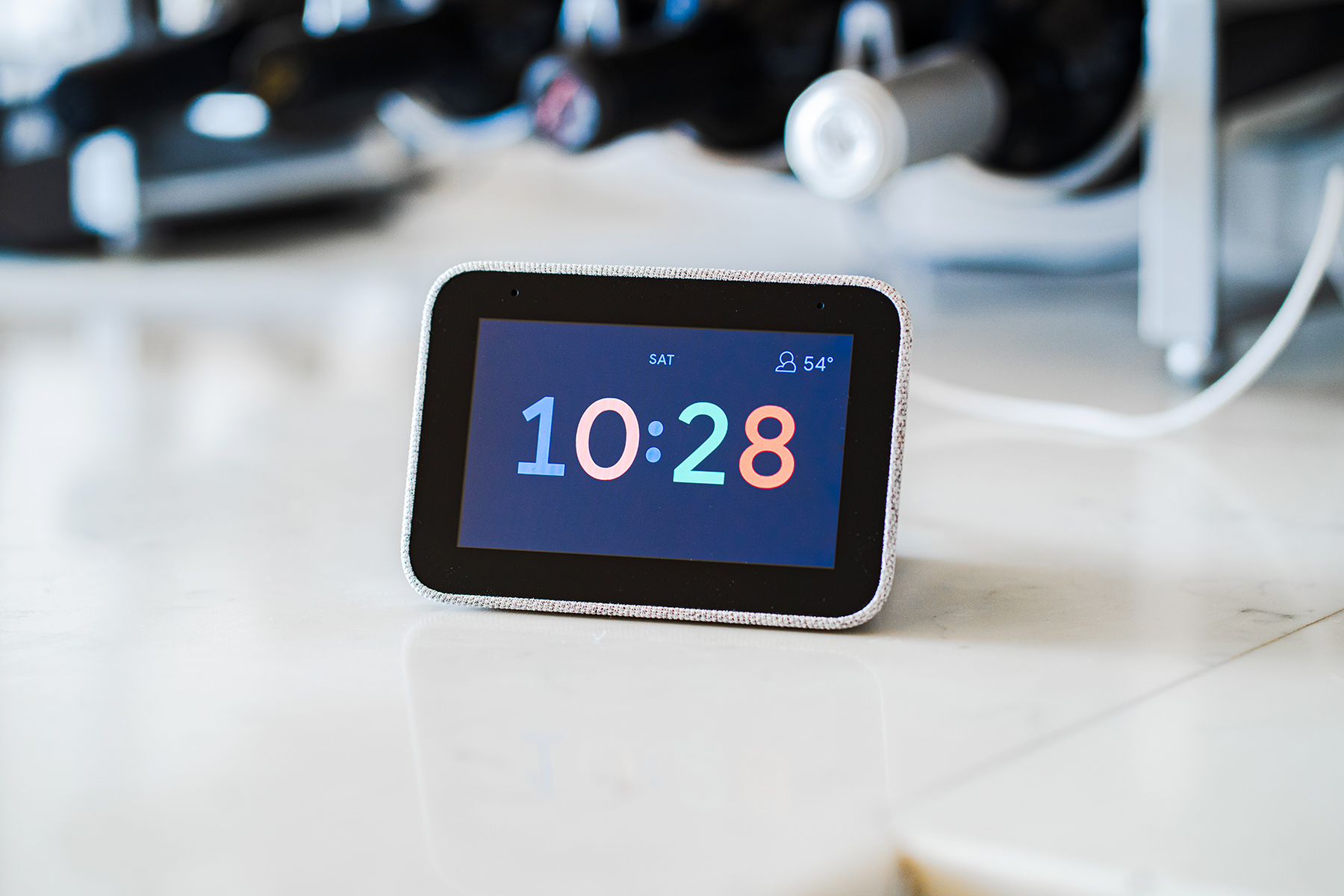 Perhaps a smart display doesn’t appeal to you because you don’t care about watching videos on it, but the idea of a smarter alarm clock like the Echo Show 5 does intrigue you. In that case, I’d recommend the 4-inch Lenovo Smart Clock, which isn’t a full-fledged smart display because you can’t play any videos on it, but it does use Google’s Smart Display tech, so you can use it for controlling your smart home as well as checking out your Nest Cams. We also like it because it lacks a camera, which makes it perfect for your nightstand. It has all of the features we want in a smart alarm clock, like an ambient light sensor, that tap-to-snooze function and a sunrise alarm, wrapped in a small, simple and affordable package.