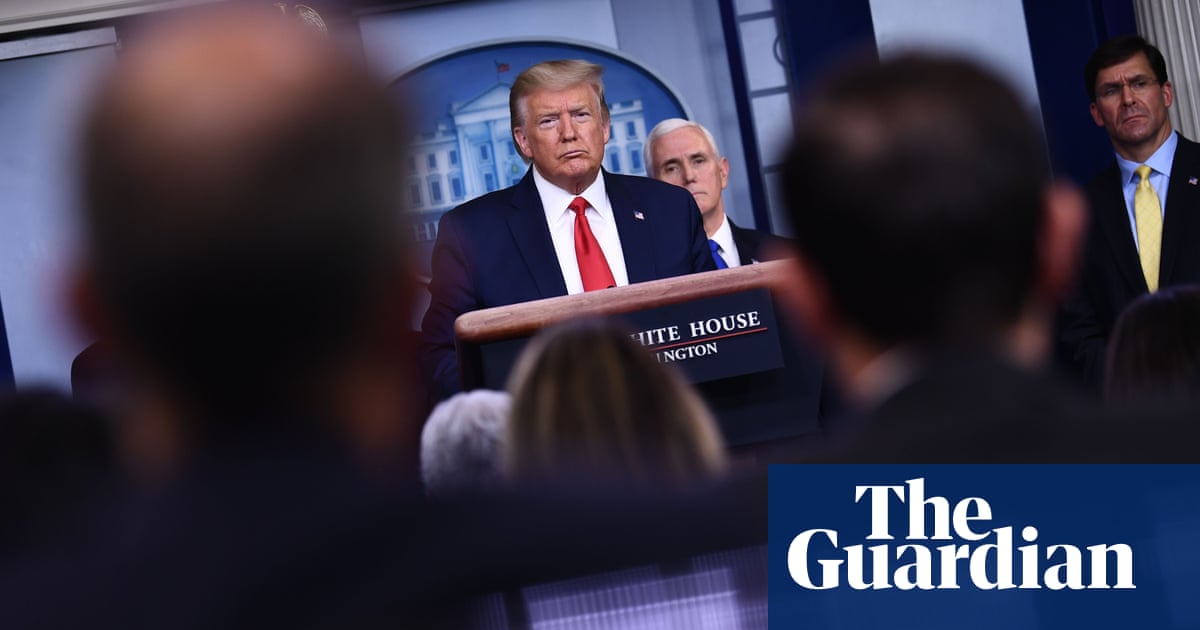 “We have it totally under control,” Donald Trump said.

It was 22 January, and he was asked in public for the first time about his worries about the coronavirus.

“It’s one person coming in from China, and we have it under control,” he said. “It’s going to be just fine.”

As with anything said by Trump, it remains unclear if he was lying, under-informed, or uninterested in becoming so. (Or all three.) And as in so many other instances, Trump’s lies and/or carelessness have had disastrous effects.

The first time Trump tweeted about the virus came on 24 January. “It will all work out well,” he reassured us. He followed up again a few days later.

We are in very close communication with China concerning the virus. Very few cases reported in USA, but strongly on watch. We have offered China and President Xi any help that is necessary. Our experts are extraordinary!

On 28 January, he shared an article from the unreliable One America News Network that suggested Johnson & Johnson was working on a vaccine. The article no longer exists, presumably because it was false.

The next day, he announced the creation of a taskforce led by Alex Azar, the health secretary.

“The risk of infection for Americans remains low, and all agencies are working aggressively to monitor this continuously evolving situation and to keep the public informed,” it explained in a release.

The day after that Trump touted that there were only five cases in the US.

Working closely with China and others on Coronavirus outbreak. Only 5 people in U.S., all in good recovery.

Meanwhile, he continued to explain how closely he was working with China on the coronavirus “a new thing that a lot of people are talking about”.

“Hopefully it won’t be as bad as some people think it could be,” he said.

On 31 January, he banned non-citizens who had recently visited China from entering the US. “We pretty much shut it down coming in from China,” he told Sean Hannity a couple of days later.

As February began, the administration reportedly declined to begin using tests for the virus produced by the World Health Organization.

A month later, about what to do about a cruise ship docked off of California with confirmed patients, Trump said: “I like the numbers being where they are. I don’t need to have the numbers double because of one ship that wasn’t our fault.”

“We had 12, at one point. And now they’ve gotten very much better. Many of them are fully recovered,” he told the media on 23 February.

Thefollowing day, he tweeted: “The Coronavirus is very much under control in the USA.”

At this point, while continuing his war with the media, he continued to suggest the warm weather would make the virus go away.

Low Ratings Fake News MSDNC (Comcast) & @CNN are doing everything possible to make the Caronavirus look as bad as possible, including panicking markets, if possible. Likewise their incompetent Do Nothing Democrat comrades are all talk, no action. USA in great shape! @CDCgov…..

“Anti-Trump Network @CNN doing whatever it can to stoke a national Coronavirus panic. The far left Network pretty much ignoring anyone who they interview who doesn’t blame President Trump.” @trish_regan @FoxNews Media refuses to discuss the great job our professionals are doing!

(A couple of weeks later, Regan was taken off the air by Fox after she dismissed the virus as “another attempt to impeach the president.”)

On 27 February, Trump began blaming the spread of the virus on immigrants and suggested closing the border was the solution.

“The Democrat policy of open borders is a direct threat to the health and well being of all Americans. Now you see it with the coronavirus,” he said at a rally in South Carolina.

The first death in the US came the following day.

As March began and the scope of the virus had increased exponentially, Trump continued to fight with the media and to congratulate himself.

I NEVER said people that are feeling sick should go to work. This is just more Fake News and disinformation put out by the Democrats, in particular MSDNC. Comcast covers the CoronaVirus situation horribly, only looking to do harm to the incredible & successful effort being made!

Gallup just gave us the highest rating ever for the way we are handling the CoronaVirus situation. The April 2009-10 Swine Flu, where nearly 13,000 people died in the U.S., was poorly handled. Ask MSDNC & lightweight Washington failure @RonaldKlain, who the President was then?

We have a perfectly coordinated and fine tuned plan at the White House for our attack on CoronaVirus. We moved VERY early to close borders to certain areas, which was a Godsend. V.P. is doing a great job. The Fake News Media is doing everything possible to make us look bad. Sad!

On 9 March he tweeted one of his most dangerous and false statements about the virus, comparing it to the flu, a common refrain among his media sycophants at the time.

The next day, he lied again about the availability of tests.

On 11 March, still more concerned with the stock market, he injected billions into the economy and suggested a payroll tax as a solution for a pandemic. Around that time he started calling for unity.

The Media should view this as a time of unity and strength. We have a common enemy, actually, an enemy of the World, the CoronaVirus. We must beat it as quickly and safely as possible. There is nothing more important to me than the life & safety of the United States!

For decades the @CDCgov looked at, and studied, its testing system, but did nothing about it. It would always be inadequate and slow for a large scale pandemic, but a pandemic would never happen, they hoped. President Obama made changes that only complicated things further…..

The next day he suggested falsely that precise screenings were being done at airports.

We are doing very precise Medical Screenings at our airports. Pardon the interruptions and delays, we are moving as quickly as possible, but it is very important that we be vigilant and careful. We must get it right. Safety first!

Had the border security been weaker, he suggested that day, the number of deaths in the US would be much worse. He provided no evidence for the claim.

To this point, and because we have had a very strong border policy, we have had 40 deaths related to CoronaVirus. If we had weak or open borders, that number would be many times higher!

On Monday this week Trump, seeming to finally take the threat seriously, said: “We have a problem that a month ago nobody ever thought about.”

The next day, attempting to rewrite history, he said he felt it was a pandemic long before it was declared a pandemic.

And then, on Wednesday morning: “I always treated the Chinese Virus very seriously, and have done a very good job from the beginning, including my very early decision to close the ‘borders’ from China – against the wishes of almost all. Many lives were saved.”

Again, he used what has become a racist term for the virus, and tried to divert responsibility. “The Fake News new narrative is disgraceful & false!”