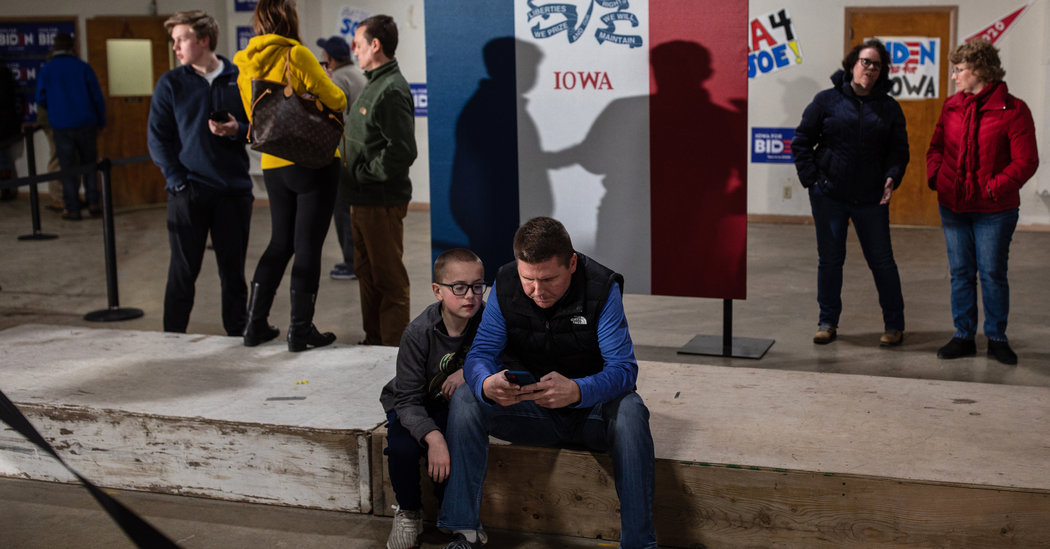 DES MOINES — Once upon a time, the winner of the Iowa caucuses was obvious to everyone.

For years, after the chaos ended at 1,600 precincts, the Iowa Democratic Party reported one set of results: the number of state delegates each candidate had secured. Whoever had the most was the winner.

The same is true this year. But there are new wrinkles that might confuse things a bit on Monday night.

Instead of the usual one result, the Democratic Party will report three sets of results: a projection of delegate totals (state delegate equivalents, often called S.D.E.s), the raw vote totals at the beginning of the caucuses (the first alignment), and the final totals after nonviable candidates, or those who did not receive 15 percent support at a precinct, have been eliminated and their supporters have chosen another candidate or decided to sit it out (the final alignment).

So what if one candidate wins the first alignment and another wins the most delegates? There is a lot of chatter about this at the bar at the Des Moines Marriott, which serves as the unofficial Iowa headquarters of the national press corps.

Again, officially, it’s all about the delegates. The eventual nominee will be the candidate who wins 1,991 delegates — a simple majority — at the Democratic National Convention, and the state delegates determine the national delegates.

And while the Iowa Democratic Party has said its job is to report results, not to declare a winner, it is encouraging news outlets to use the state delegate numbers.

But in terms of influencing the presidential nomination race, the caucuses have never really been about delegates. Iowa has only 41 of them this year, an inconsequential number in the national game. What makes Iowa so important is the perception it creates of who is ahead, who is “viable,” who has that most prized and nebulous of assets: momentum.

And with three sets of results now being publicly disclosed, candidates could spin the results, emphasizing whichever number makes them look strongest.

So how do some media outlets and campaigns plan to decide the winner of the Iowa caucuses? We did a quick survey, and the results suggest there is some disagreement among the candidates, at least — and that caucus night could be a bit of a mess.

How the media will identify a winner

The Associated Press has said that although it will report all three numbers, it will “declare a winner in Iowa based on the number of state delegates each candidate wins.”

“That’s the historical measure that has determined the winner,” she added.

The Times, too, will base the winner of the Iowa caucuses on state delegate equivalents, though our results pages and coverage will report all three numbers.

CNN has said it will “project the winner of Iowa based on the candidate who receives the most state delegate equivalents.”

A spokeswoman for Fox News said the network would determine the winner of the caucuses based on who wins the most state delegate equivalents. But it will also look closely at how each candidate performs in the first and final alignments to understand and report on the dynamics shaping the caucuses, she said.

How party officials will handle the results

David Bergstein, a D.N.C. spokesman, said: “The party doesn’t declare a winner of the caucuses, it reports results. The only way to become the Democratic Party’s presidential nominee is by winning a majority of national convention delegates, so we strongly encourage anyone who wants to understand who is winning the race for the nomination to pay attention to those results.”

What the campaigns will highlight

The Biden campaign said that both the tight four-way race in Iowa as well as the new numbers the Iowa Democratic Party plans to release will make this caucus night particularly unique. But the campaign also argued that in the end, the candidates will be fighting for delegates.

“There’s a pretty clear sense that the state delegate equivalent is the metric that people will use to base their decision on who won and lost,” Bill Russo, a spokesman for the Biden campaign, said.

A spokesman for Mr. Sanders declined to comment on its strategy. But his campaign has long argued for increased transparency around first and final alignment results

But pressed on the issue, he said: “At the end of the day, I think that the first impression is probably the most accurate portrayal of who won the night.”

The Warren campaign did not respond to multiple requests for comment.

Mr. Buttigieg’s campaign has said they will focus on how many delegates they win.

“The only thing that counts in Milwaukee is delegates,” a campaign spokesman, Chris Meagher, said, referring to the Democratic National Convention in July. “We’re playing to win. And this year more than any other, Democratic voters are looking for a nominee who knows how to win.”

“The number that matters for the national delegate allocation is the state delegate equivalents, so that’s the true metric of the Iowa caucuses, and we built a campaign to maximize our strength in those delegates,” Norm Sterzenbach, who leads Ms. Klobuchar’s caucus strategy, said at a Bloomberg News roundtable in Des Moines on Thursday.

But, he added, the campaign will highlight whatever numbers “show Amy’s strength on caucus night.”

Mr. Yang is polling in the mid-single digits in Iowa and will need significantly more support to win delegates, because candidates need 15 percent support in a precinct to be eligible for any. Asked how they would assess the winner, Mr. Yang’s campaign said only that it was “looking at a few different scenarios and outcomes” and expected “to have a good caucus night.”

Like Mr. Yang, Mr. Steyer appears unlikely to reach the 15 percent threshold he will need to be viable. His campaign argued that the state delegate equivalents could be misleading because of the wide variance in the size and demographics of each voting precinct.

“The first expression of preference, the popular vote, will provide the most transparent and accurate report of support among Iowa caucusgoers,” said Jeff Berman, a senior adviser to the Steyer campaign.