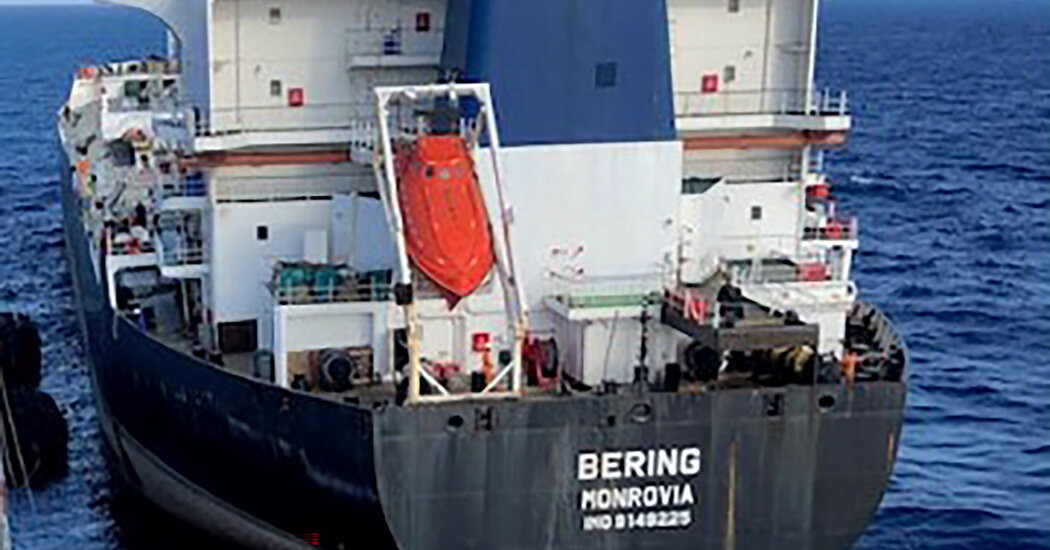 WASHINGTON — The United States has seized more than 1.1 million barrels of Iranian fuel that was headed to Venezuela, officials said on Friday, in a high-seas handover that blocked two diplomatic adversaries from evading American economic sanctions.

The transfer of fuel from four Greek-owned ships, occurring over the past several weeks, risked igniting a tit-for-tat response from Iran. This week, an Iranian military unit briefly boarded a tanker in the Gulf of Oman in what several American officials described as a show of force — and, potentially, Tehran’s efforts to reclaim any of its fuel that might be on the ship.

American officials said the four tankers — the Bella, the Bering, the Pandi and the Luna — were boarded without force after diplomatic and legal pressure was brought to bear against a Greek shipping magnate, George Gialozoglou.

American officials would not describe how the high-seas intercepts occurred other than to say U.S. military ships were not involved. A warrant dated July 1 that approved the operation said the fuel could be secured by American government personnel, contractors or others appointed by the court.

Several weeks ago, after being informed that the fuel shipments would violate American sanctions against Iran, U.S. officials said Mr. Gialozoglou agreed to allow American authorities to take the fuel.

Prosecutors said profits from the National Iranian Oil Company have helped fund Tehran’s elite military unit, the Islamic Revolutionary Guards Corps, which supports Shiite militias in the Middle East and has been designated a terrorist organization by the Trump administration.

“Iran’s not supposed to be doing that,” President Trump told reporters on Friday.

Iran denied it had any relation to the seized fuel and accused the United States of waging a “psychological war” against the country. The Trump administration announced the transfer operation the same day it was pushing the United Nations Security Council to extend an arms embargo against Iran, a vote the United States lost.

“Neither the ships are Iranian nor their owners or their cargo has any connection to Iran,” Hojat Soltani, Iran’s ambassador to Venezuela, said Thursday on Twitter, after the seizure news was first reported by The Wall Street Journal. He called the announcement a “big lie.”

Over the past two years, as the Trump administration repeatedly placed sanctions on Iran’s oil and other lucrative industries, Tehran has been shut out of global markets and faced with economic collapse.

It has found a willing trading partner, however, in President Nicolás Maduro of Venezuela, whose own government has been crippled by American sanctions as the Trump administration seeks to push him from power after widely disputed elections in 2018.

Mr. Maduro so far has resisted the pressure campaign to resign. But skyrocketing gasoline prices in Venezuela have impeded access to food, jobs, security and health care, and could galvanize the country’s already-simmering public against the embattled leader.

Tankers loaded with Iranian fuel have previously sailed to Venezuela, and Iranian technicians have flown in to help repair oil refineries that have atrophied under Mr. Maduro’s watch.

“We are seeing more and more global shipping fleets avoiding the Iran-Venezuela trade due to our sanctions implementation and enforcement efforts,” Morgan Ortagus, the State Department spokeswoman, said in a statement.

The intervention announced on Friday was what the Justice Department described as the largest shipment of fuel ever seized from Iran. It followed a court warrant to allow the United States government to take custody of the fuel aboard the four tankers.

Officials said Brian H. Hook, the State Department’s departing special envoy for Iran policy, recently persuaded Mr. Gialozoglou to turn over the fuel. The fuel on two of the tankers was seized last month, and the rest was taken over the past few days.

At least two of the ships had been in or near the Arabian Sea, and American officials waited until they moved far enough away from Iranian waters before halting their transit, seeking to avoid any chance of a military clash after seizing the fuel.

The other two ships were stopped in the Atlantic Ocean, where the fuel was offloaded, after exiting the Mediterranean Sea, the officials said.

Meysam Sharifi, an oil trader in Tehran, said the tankers’ only connection to Iran was the origin of the cargo, which was paid for in advance. Iranian-flagged ships have previously delivered fuel to Venezuela, Mr. Sharifi said.

This time, wary of being stopped as a result of the American court warrant, Mr. Maduro’s government preferred that the fuel be delivered on another country’s vessel, Mr. Sharifi said.

Ships loading and carrying Iranian oil often operate with their GPS locaters shut off when loading their cargo in the Persian Gulf. It is also common for Iranian tankers to deliver or transfer cargo ship-to-ship offshore.

The fuel is worth at least tens of millions of dollars — money that officials said could now, once the fuel is auctioned off, be delivered to a government fund for victims and their survivors of state sponsors of terrorism. That fund, which is administered by the Justice Department, traditionally has been supported by payments made by banks and companies that have violated terrorism-related American sanctions against Iran.

The Treasury Department has estimated that Iran’s Revolutionary Guards reaped hundreds of millions of dollars in the spring of 2019 alone, selling nearly 10 million barrels of crude oil and millions more in condensate and gasoline through clandestine shipments.

With the seizure and transfer of Iran’s fuel now made public, a senior American official said that the Pentagon was closely monitoring Iranian military activity in the Persian Gulf for possible retaliation.

On Wednesday, American forces released video of what they described as Iranian troops climbing down a rope from a hovering helicopter to board a Liberian-flagged ship, the Wila, in the Gulf of Oman.

The U.S. Central Command, which oversees American military forces in the region, called the Iranian operation “reckless” and a violation of commercial shipping in international waters. In a statement, the military command said it watched the episode from nearby, and noted that there were no distress calls from the Wila.

The Justice Department said the Iranian naval troops apparently were looking for their fuel, but landed on the wrong ship.

An Iranian official with knowledge of the episode said the troops boarded the Liberian ship to retaliate against the American interdiction, but ultimately decided against holding it. The official, who spoke on the condition of anonymity, said Iran did not want to stir tensions on the eve of the arms embargo vote in the Security Council.