WASHINGTON — Sitting somberly behind the Resolute Desk in the Oval Office, framed by his custom gold curtains, President Trump for the first time on Wednesday night acknowledged the seriousness of the coronavirus.

The president who until now has tried to project a “business as usual” demeanor, even comparing the coronavirus to the everyday flu, confronted the fact that he faces a global pandemic that required a new set of rules, referred to the virus not as a workaday cold but as a “horrible infection” and announced new travel restrictions that he said would stop its spread.

But his rare evening address to the nation also contained accusatory language and a defensive tone that were vintage Trump.

He blamed European and Chinese people for bringing the outbreak to the United States, describing it ominously as a “foreign virus,” language that reflected the isolationist views of his chief speechwriter, Stephen Miller, who alongside Jared Kushner, the president’s son-in-law, helped draft the address.

He also appeared to minimize the damage the virus has already wreaked across the country, where there are now more than 1,200 active cases. Instead, he heaped praise on his administration’s response when in reality, his attempts to play down the health crisis have been under fierce criticism for weeks.

There were also surprising — and significant — inaccuracies in the speech, which administration officials and the president had to clarify almost immediately afterward. Mr. Trump said in his address he would suspend “all travel from Europe to the United States,” but the ban in fact applies to foreign citizens. And while he said the measure would “apply to the tremendous amount of trade and cargo” across the ocean, the order in fact affects only people.

Throughout his 10-minute, uncharacteristically formal address, Mr. Trump struggled to find a middle ground between acknowledging the deepening crisis and diminishing its threat to the country’s future.

“This is not a financial crisis,” he said. “This is just a temporary moment of time that we will overcome as a nation and as a world.”

The speech capped a day when concerns about the risk of the virus seemed to reach a new pitch and measures to protect vulnerable populations began to upend the rhythms of daily life across the country — many schools announced they would close indefinitely, some nursing homes barred visitors, and workplaces across the country urged their employees to work from home.

But his measured tone belied the frustration Mr. Trump has been venting behind closed doors in recent days over the spread of the coronavirus, the tumbling financial markets it has caused and the blame he has directed at Jerome H. Powell, the chair of the Federal Reserve, for not making more moves to reduce the economic effect.

Despite handing over the coronavirus portfolio to Vice President Mike Pence, Mr. Trump has been unable to let it go as he has watched the stock market plunge and the economy he has pinned his re-election hopes on suddenly falter. But it was Mr. Pence who played the biggest role in moving Mr. Trump to give a more forceful public statement, over many days, according to White House officials.

Until Wednesday, Mr. Trump’s response to the pandemic had been defined mostly by his own wishful thinking that projecting a “business as usual” approach would calm nerves and reassure the stock market.

But the day’s events convinced Mr. Trump that it was time for a response, prompting the president to upend his schedule, which included a private dinner at the residence or Mr. Pence, who also canceled a scheduled news briefing with the coronavirus task force to allow Mr. Trump to deliver the administration’s message of the day.

After Mr. Trump’s speech, Stephanie Grisham, his press secretary, also announced the cancellation of the president’s planned trip this week to Colorado and Las Vegas, citing “an abundance of caution from the coronavirus outbreak.”

Privately, the president has complained to advisers that he can no longer campaign for re-election the way he would like and insisted that concerns about the virus have been overblown.

Mr. Trump had been particularly insistent on sticking with his plans for Las Vegas, where he was scheduled to address a large gathering of supporters on Saturday at the Republican Jewish Coalition in Las Vegas. His appearance there was only scrapped late Wednesday night and organizers earlier in the day said they had been told Mr. Trump planned to attend.

Earlier in the week, Mr. Trump also had to be persuaded by several advisers to hold off on announcing a campaign rally in Florida that was scheduled for the end of March.

“It will go away, just stay calm,” the president said Tuesday after meeting with Republican senators on Capitol Hill, even as officials on his own coronavirus task force had publicly contradicted his “nothing to see here” message in a way that has rarely been seen before in the administration.

Mr. Trump’s first public response to the health crisis was on Jan. 31, when the administration announced it would bar entry by most foreign citizens who had recently visited China, and put some American travelers under a quarantine as it declared a rare public health emergency.

The move was considered a significant step at the time, and Mr. Trump was lauded by Republicans for taking what some described as an unprecedented action to contain the spread of the virus.

But officials have since conceded that those efforts at containment have not prevented the virus from spreading within communities around the United States.

And as that spread has increased, Mr. Trump’s administration has been criticized for a decision to dismantle a branch of the National Security Council devoted exclusively to global pandemics, and for a shortage of coronavirus test kits that until this week made it impossible to identify anyone who was infected. 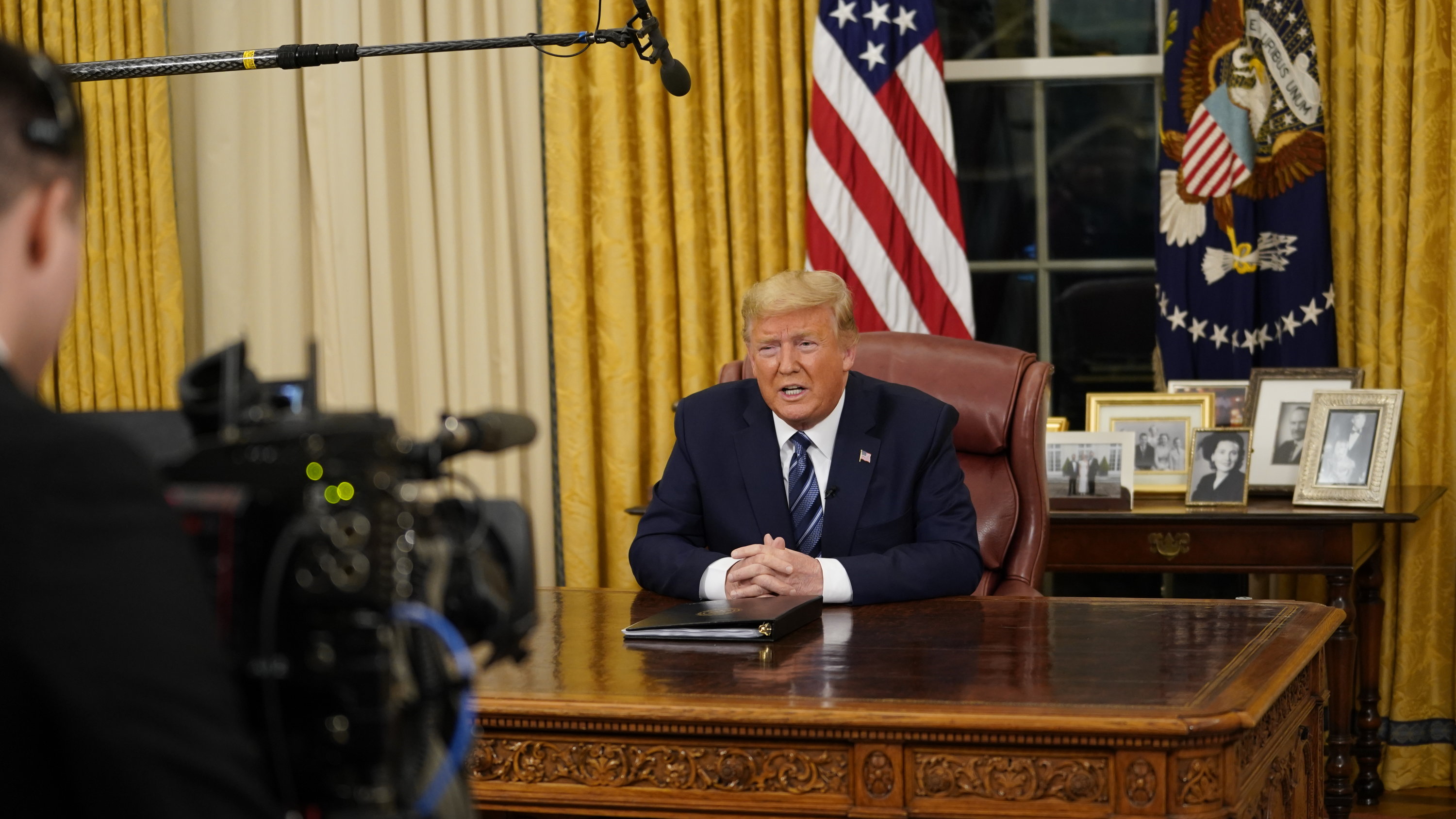 President Trump addressed the nation about the steps his administration will take to combat the coronavirus crisis.CreditCredit…Doug Mills/The New York Times

For his part, Mr. Trump has continually made false statements and misinformed the public about the severity of a virus that has left at least 37 people in the United States dead. Instead, his focus has been on repeating how well he thinks the response has gone rather than focusing on the response itself.

Speaking last month at the Conservative Political Action Conference, where many lawmakers were exposed to an attendee infected with the virus, Mr. Trump said that his administration’s response “has been now given very good grades, like an A +++.

Mr. Trump has claimed, falsely, that the number of cases in the United States would go down to “close to zero.” He has been fact-checked in real time by members of his own coronavirus task force, for stating falsely that a vaccine would be available “relatively soon.”

And in his address Wednesday night, Mr. Trump repeated another theme — that he viewed the virus as something that was inflicted upon him from a foreign country. He wanted to discuss “our nation’s unprecedented response to the coronavirus outbreak that started in China and is now spreading throughout the world,” he said.

Over the past month, Mr. Trump has been grasping at strands of good news in his briefings. In February, for instance, he repeated something he picked up in one: that viruses do not spread as fast in warmer temperatures.

“A lot of people think that goes away in April with the heat,” Mr. Trump told Fox News last month. In reality, however, it is not clear how coronavirus will change with the weather. And Dr. Anthony S. Fauci, the director of the National Institute of Allergy and Infectious Diseases, told members of Congress on Wednesday that when it came to the virus, “we have got to assume it is going to get worse and worse and worse.”

Behind the scenes, Mr. Kushner has taken an increasingly active role in the coronavirus response, and spent the day with the president on Wednesday.

But he has also been among a small group of White House advisers who have reinforced Mr. Trump’s belief that the news media is exaggerating the threat of the virus in an effort to damage the president, according to people familiar with the conversations in the West Wing.

Republicans who have clashed with the White House said they remained skeptical about what the president could accomplish, even as he claimed on Twitter that he was “prepared to use the full power of the Federal Government” to confront the challenge posed by coronavirus.

“For the foreseeable future, people are going to be looking for steady leadership and effective management, neither of which are his calling card,” said Brendan Buck, a former aide to Speaker Paul D. Ryan. “We don’t know how long this will last or how bad it will be.”