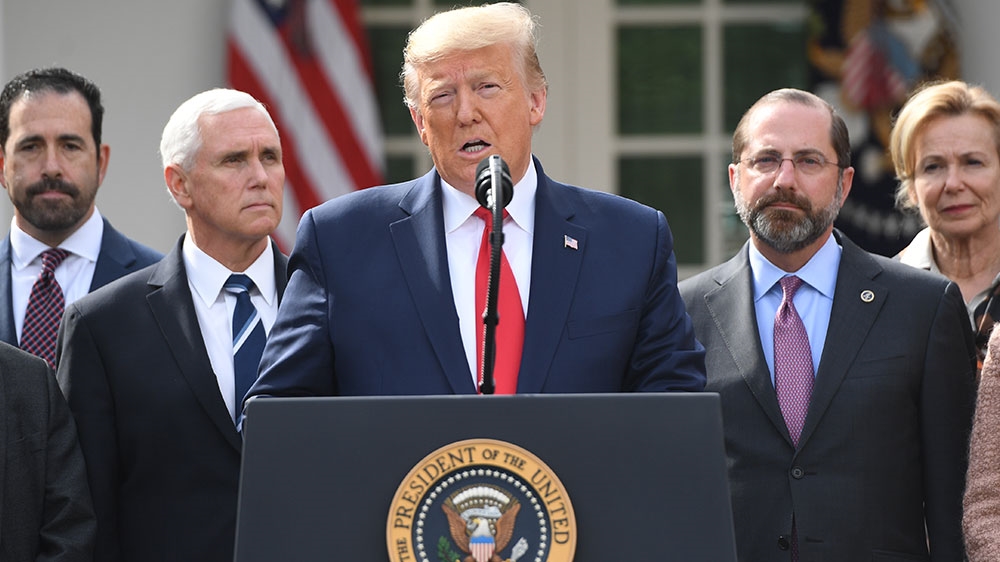 The White House taskforce grappling with the coronavirus pandemic has issued 15-day guidelines to limit the spread of the illness in the United States.

According to the guidelines, issued on Monday, states that have evidence of community spread of the virus should close bars, restaurants and other public spaces where people congregate in large numbers. The guidelines also suggest limiting gatherings to groups of 10 people or less.

The coronavirus has infected at least 170,000 people worldwide and killed more than 6,500, according to Johns Hopkins University. The US has almost 3,500 confirmed cases of the virus and 68 confirmed deaths, according to the Centers for Disease Control and Prevention (CDC).

“My administration is recommending that all Americans, including the young and healthy, work to engage in schooling from home when possible, avoid gathering in groups of more than 10 people, avoid discretionary travel and avoid eating and drinking in bars, restaurants, and public food courts,” President Donald Trump said.

“We have an invisible enemy,” Trump said. “This is a bad one. This is a very bad one.”

Dr Anthony Fauci of the US National Institutes of Health said that while these measures might seem strict, “it isn’t an overreaction”.

While it may seem that the US only has a few confirmed cases, Fauci warned that there are likely many more unconfirmed cases. Prevention is key to keeping the situation manageable, Fauci added.

“We hope that the people of the US will take them very seriously.”

With the US stock market in a downward spiral as world governments limit travel and trade, legislators have been working to support people and businesses affected.

Congress passed, earlier this month, an $8.3bn package to support the development of testing kits and other measures to prepare for the virus.

As states, including New York and Ohio, announced the closure of restaurants and bars, many worry that service industry staff will be the hardest hit.

While Congress has promised aid to those without paid leave, 54 percent of US workers would not be subject to protections for paid sick leave under a bill passed by the House of Representatives on Saturday morning. The bill only requires businesses with fewer than 500 employees to provide paid leave.

Trump said the Senate is considering this aspect of the bill when asked about it at a news conference held to announce the guidelines.

The US government also announced the rollout of quickly developed coronavirus test kits, created by private industry in conjunction with the CDC.

US researchers began human testing for a COVID-19 vaccine in the state of Washington on Monday, giving the first injection to a mother in good health, as part of a trial where 45 individuals will receive two doses. Even if the research goes well, a vaccine would not be available for widespread use for 12 to 18 months.

Trump said the current outbreak could last until July or August, but it “could be longer than that”.

The US stock market plunged about 3,000 points after Trump’s comments, but Trump said he did not want to classify the drop as a recession.

“We are coming out with strong suggestions. It’s becoming a little bit automatic … I wouldn’t say the restaurant business is booming,” Trump said.

“We look forward to the day we can get back to normal.”