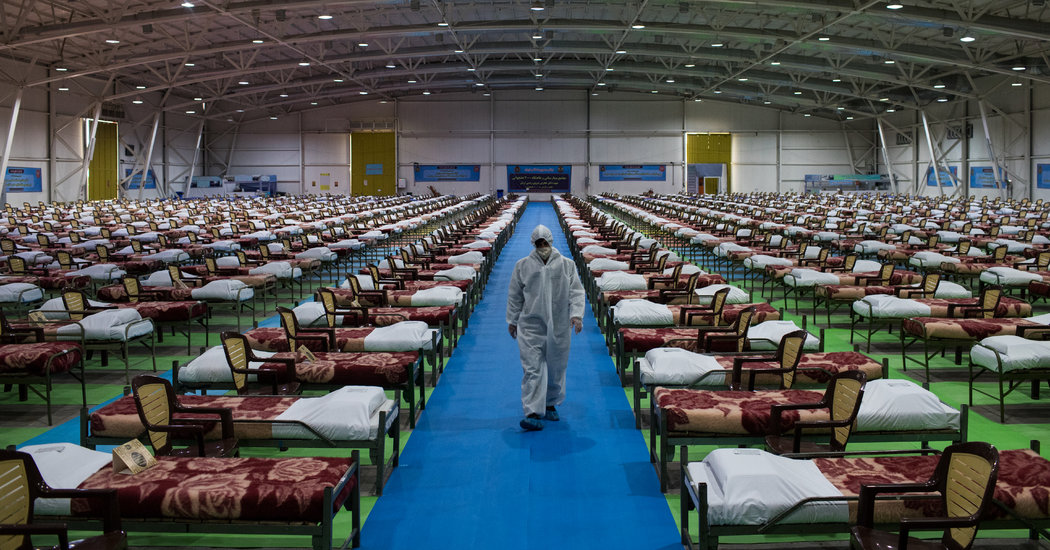 As Iran struggles with a devastating coronavirus outbreak, a broken economy and a severe shortage of medical equipment, it says that American trade sanctions are taking Iranian lives and has called for the United States to lift them on humanitarian grounds.

Iran’s plea is gaining traction around the globe, winning support from allies like Russia and China, but also the European Union, the United Nations secretary general, rights groups and nearly three dozen members of Congress, who have appealed to the Trump administration to suspend the sanctions for as long as Iran is battling the coronavirus.

Iran, a global epicenter of the virus, has confirmed more than 47,000 cases and more than 3,000 deaths, although public health experts estimate the real toll to be several times higher.

“We had always said the sanctions are unjust but coronavirus revealed this injustice to the world,” Foreign Minister Javad Zarif said in a recent video message, which he began by removing a surgical mask from his face with blue latex gloves. He referred to the sanctions as “economic terrorism.”

The issue has raised questions about the collision of punishing American sanctions with a deadly pandemic, including whether Iran is trying to exploit the crisis to achieve a long-held goal of lifting sanctions, whether the United States is using the virus to squeeze Iran beyond what sanctions alone could do, and what responsibility the United States has for a disaster caused at least partly by Iran’s own inept response.

Secretary of State Mike Pompeo has been unequivocal, saying in a tweet on Saturday that Iran’s “concerted effort to lift U.S. sanctions isn’t about fighting the pandemic. It’s about cash for the regime leaders.”

He has accused Iran’s leaders of “trying to avoid responsibility for their grossly incompetent and deadly governance.”

If anything, the United States has doubled down, imposing fresh sanctions as recently as two weeks ago, even as it offered Iran medical aid to help combat the pandemic, aid Iran has refused.

The United States frequently reiterates that the sanctions exempt the sale of medicine and medical devices, however American secondary sanctions on financial institutions and companies that do business with Iran have made it nearly impossible for Iran to buy items like ventilators to treat coronavirus patients.

The sanctions “have largely deterred international banks and firms from participating in commercial or financial transactions with Iran, including for exempted humanitarian transactions, due to the fear of triggering U.S. secondary sanctions on themselves,” Human Rights Watch found in a report last year, months before the coronavirus emerged.

Now the need for such equipment is urgent.

“U.S. sanctions are stopping medical equipment from being sent to Iran,” Senator Chris Murphy, Democrat of Connecticut, said in a tweet on Tuesday. “As a result, innocent people are dying.”

Iran’s leadership also bears a share of the blame for its fumbling response to the crisis.

The virus was first detected in Iran in late February, but the government, ignoring the advice of its own health experts, took no action to enforce social distancing or lock down affected areas until this week, allowing the virus to spread unchecked and turning Iran into a regional hub for the outbreak.

The government came under fire for underreporting the number of cases and playing down the threat, while rivalries between the government and the military left the country wondering who was in charge of containing the pandemic.

On top of that, Iran’s supreme leader, Ayatollah Ali Khamenei, rejected the American offer of humanitarian assistance, claiming that the virus was “created by America.” Analysts said that accepting American aid was also seen as politically untenable — it would not fix the economy or end sanctions but would have the undesirable effect of making the United States look benevolent.

Turning the focus to American sanctions diverts attention from Iran’s own failings and aligns with Iran’s policy objectives.

“Iran sees an opportunity to leverage the coronavirus to pressure the U.S. to ease its maximum pressure policy because they are at a deadlock with the economy,” said Siamak Ghasemi, an Iran-based economist. “Of course sanctions relief will give the government more financial resources to battle coronavirus, but they are also thinking long term.”

But some analysts say that the Trump administration also sees the virus as an opportunity, an additional tool that in tandem with sanctions could force Iran to capitulate to American demands, including a renegotiated, tougher nuclear agreement and a curb on its regional activities.

“The Trump administration believes that the outbreak has succeeded where sanctions failed to weaken the economy even further,” said Ali Vaez, Iran director for International Crisis Group. “They think that the timeline for bringing Iran to its knees has shortened because of the coronavirus.”

There’s no question that the virus has slammed Iran’s already teetering economy.

Most small businesses, restaurants and hotels and other service industries have been closed for over a month during what is usually their most lucrative season, around the Persian new year. Factories have scaled down production and unemployment has spiked, with economists saying Iran is losing at least a million jobs per month.

Economists said the coronavirus would shrink Iran’s GDP by a third and create at least a $10 billion budget deficit this year. Before the virus, sanctions had already cost Iran about $200 billion in revenue, mainly from decimated oil sales, and devalued the currency by half in the past two years. And oil sales to the few countries that still flout American sanctions, like China, have plummeted as the price of crude oil has plunged.

“When government has no access to its resources, it can’t bail out businesses, it can’t quarantine and it can’t provide economic support for people to not work,” said Pooria Asteraky, a tech entrepreneur who occasionally consults for Iran’s M Telecommunications Ministry.

In a sign of desperation, Iran requested a $5 billion loan from the International Monetary Fund, the first time it has applied for such a loan since the 1960s. The European Union has said it would support the loan, but the United States is expected to block it.

Economic distress brought Iranians to the streets in November, and the government is aware that it could do so again now that the economy is even worse. Blaming the United States could deflect some of that anger.

Whoever is to blame, the sight of overflowing hospitals, mass graves and doctors pleading for medical supplies has won some international sympathy, especially among countries already opposed to the Trump administration’s unilateral withdrawal from the Iranian nuclear agreement and imposition of sanctions.

The European Union donated $22 million in humanitarian aid to Iran last week, and Japan sent $23.5 million. On Tuesday, the European Union exported medical goods to Iran in its first use of a financial mechanism set up last year to allow European companies to work around American sanctions.

On Tuesday, 33 American senators and representatives sent a letter to the Trump administration, urging it to suspend sanctions as “a humanitarian gesture to the Iranian people” and to “find a way” to deliver direct aid.

“U.S. sanctions should not be contributing to this humanitarian disaster,” Senator Bernie Sanders, one of the signatories, said in a statement on Tuesday. He added: “Every country on earth is going to be affected by the coronavirus. We are all in this together. If there was ever a moment to show each other unprecedented cooperation and support internationally, this is that moment.”