Are we about to see a wave of regret about the rush to “transition” from one sex to the identity of another?

A few examples do not make a trend, so I don’t want to come to a conclusion. I have been having a very civil discussion with a person who transitioned from one sex to another, and she expresses no regrets. I am grateful for her willingness to engage with me for obvious reasons: I am a vocal critic of the transgender movement.

Whatever you think of an adult’s decision to address their gender dysphoria through medical means, the rush to use social and biological transing is a gruesome trend. Children are not old enough or rational enough to have a good sense of their own “identity.” A major part of growing up is figuring out who you are, and imposing an arbitrary stop to that process is simply wrong.

None of us are who we were pre-teens or teens, and few of us made it through puberty without significant trauma. Depression, anxiety, self-doubt, and radical personality changes are the norm, not the exception. It’s called growing up.

The parade of people expressing regret is growing. Yet another famous person who came out as transgender is speaking up about his disastrous experience with becoming transgender, and about his decision to de-transition despite the enormous pressure put upon him.

Navy SEAL Chris Beck came out in 2013 as transgender. @andersoncooper did a special on @cnn about it. His story was used as propaganda to allow trans people in the military and to popularize the issue. Now Chris is ready to expose the truth. Watch here: https://t.co/ChbjE6Kgly pic.twitter.com/wQbGPln9K3

Robby Starbuck interviewed Chris Beck, a former Navy Seal who was used as a propaganda tool to promote transgender ideology. He told his story to Starbuck and outlined the pressure he felt to both transition and then to come out to the world as an example of how transitioning genders is a wonderful thing.

He no longer believes that, and further believes that he was used. This video is super long, so don’t expect to watch it right now. I just wanted to ensure you had access to the whole thing should you desire. And Starbuck deserves the clicks for doing the work here.

Beck was trotted out as an example of the hidden group of people who have suffered from gender dysphoria, and his story helped lay the groundwork for the rapid transformation of attitudes over the past decade. CNN went full bore in promoting his story as an example of why transgenderism should be embraced.

Beck is pretty pissed about the whole affair. He says he felt very pressured both during the transition and to then promote his own experience as a very positive one. It wasn’t long after all the hoopla died down that he regretted the decision, and stopped taking hormones not long after that.

Others, who still identify as trans, are coming out to explain some of the medical issues they have experienced due to their decision to go forward with medical treatments. The following video is gruesome so be advised, if you watch it you will have to stomach some tough stuff.

This is terribly sad. So so sad. pic.twitter.com/qpa524UK4b

The commitment to transgender ideology on the Left is so strong that states like California are declaring themselves “sanctuary states,” to which minors can escape or be kidnapped and trafficked to should they desire so-called “gender-affirming care.” California will ignore other states’ court orders, custody decisions, and not arrest people for outstanding warrants related to gender care for minors. California is literally becoming a sanctuary state for kidnappers.

Other states have not yet gone so far, but they are getting close. School officials are aiding the “transition” of children without parental consent, and minors in many states are able to get hormones and surgery without consent.

Watch this mother’s heart-wrenching testimony at a @SASDinfo board meeting.

Teachers coaxed her daughter to be trans. They shaved her head, and changed her name without notifying parents. Her daughter is now on testosterone and got a double mastectomy. pic.twitter.com/OETjAampEQ

Many of these treatments are sold as safe and reversible, but that is simply false. Bone loss, brain development changes, and a host of other side effects are known to happen. Even the doctor who helped one of the drugs get approved (for prostate cancer) says using the drug is a horrible idea for gender transition. It’s a cancer treatment, not a drug safe for children. In a letter to the editor at the New York Times, he wrote: 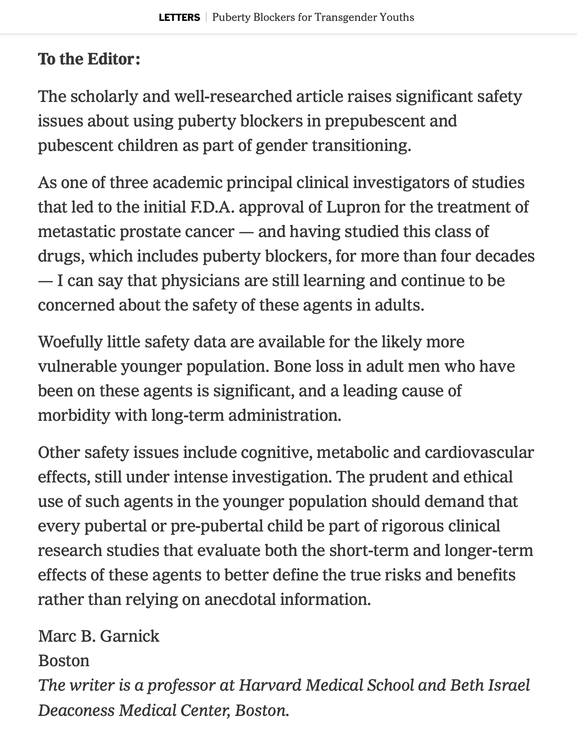 I expect that in the near future we will see large numbers of people in their teens and 20s suffering from severe regret and horrifying side effects. The wave is just starting to become visible, and chances are that it will turn into a tsunami.

Perhaps then we can get some justice for the victims, but I doubt it. The cultural forces are way too powerful to allow for widescale regret and punishment. That generation of teachers pushing this on children will never repent.