Joseph R. Biden Jr. on Tuesday excoriated President Trump’s stewardship of a nation convulsed in crisis over racism and police brutality, likening Mr. Trump’s language to that of Southern racists of the 1960s while also warning Americans that “we cannot let our rage consume us.”

In his first formal speech out in public since the coronavirus shuttered the campaign trail in mid-March, Mr. Biden delivered perhaps his closest approximation yet of a presidential address to the nation. He emphasized themes of empathy and unity to draw a clear contrast with Mr. Trump, who has threatened to deploy the military nationwide to dominate protesters and has portrayed those demonstrating as “thugs.”

With Mr. Trump determined to cast himself as a self-described “law and order” president, Mr. Biden aimed to appeal to a broader range of the electorate’s concerns, pledging to address economic inequality and racial injustice but also urging the nation to come together at a moment of deep civil unrest.

“Donald Trump has turned this country into a battlefield riven by old resentments and fresh fears,” Mr. Biden said, speaking against a backdrop of American flags at Philadelphia’s City Hall. “Is this who we are? Is this who we want to be? Is this what we want to pass on to our children and our grandchildren? Fear, anger, finger pointing, rather than the pursuit of happiness? Incompetence and anxiety, self-absorption, selfishness?”

The country, Mr. Biden said, was “crying out for leadership.”

Mr. Biden’s remarks, which were by turns optimistic about America’s potential and somber about the depth of its challenges, came as his team moved urgently to press a more aggressive case against Mr. Trump at an extraordinarily high-stakes moment for the country, marked by a pandemic, devastating unemployment numbers, racial strife and violent clashes between police and protesters during the demonstrations, which in many cities have also led to looting.

Heightening the tensions, in the last several days alone, Mr. Trump has called protesters “terrorists,” spent time in an underground bunker and visited a church for photographs with a Bible, while peaceful demonstrators were dispersed with tear gas to clear his path. His campaign is increasingly seeking to paint Mr. Biden as sympathetic to those “causing mayhem,” as Mr. Trump’s team put it on Tuesday.

To chart his own vision for the country, Mr. Biden left his home in Wilmington, Del., to travel to Philadelphia. It is the city where the nation’s founding documents were crafted, where President Barack Obama gave his famous speech on race in 2008, and where Mr. Biden held his first large-scale rally of the 2020 campaign, promising to heal the soul of the country. It is now also a city rocked by protests and growing racial tensions.

In his remarks, which lasted around 20 minutes, Mr. Biden urged his opponent to consult the Constitution and the Bible instead of eviscerating the “guardrails” of democracy, one of many times in the speech in which Mr. Biden reached for language that has traditionally had bipartisan appeal.

“The president held up the Bible at St. John’s Church yesterday,” Mr. Biden, a practicing Catholic, said, referencing the photographs for which Mr. Trump posed. “I just wish he opened it once in awhile instead of brandishing it. If he opened it, he could have learned something. That we’re all called to love one another as we love ourselves.”

Yet Mr. Biden, who spent much of the presidential primary campaign casting Mr. Trump as an “aberration,” also said that defeating him would not be enough to heal the nation’s centuries-old divisions, which are growing deeper seemingly by the day. Seeking to acknowledge both the pain and the chaos of the moment, he warned, “we must not let our pain destroy us.”

“We’re a nation enraged,” he continued. “But we cannot let our rage consume us. We’re a nation that’s exhausted, but we will not allow our exhaustion to defeat us.”

Declaring this the time “for our nation to deal with systemic racism,” Mr. Biden called on Congress to pass measures including a ban on police chokeholds. He urged a “model use-of-force standard.” He highlighted his promise to create a national police oversight commission. And he pledged that as president, he wouldn’t “fan the flames of hate. I’ll seek to heal the racial wounds that have long plagued our country.”

As Mr. Trump cracks down on protesters, how Mr. Biden handles the coming weeks could define his candidacy for the final five months of the presidential contest. There is an increasing sense of urgency among his allies to see him leading from the ground, and his speech Tuesday marked the third straight day he appeared in public.

“This is a moment in our nation’s history that is as unique as if we had the 1918 pandemic and the 1929 stock market crash and the 1968 riots all happen at the same time,” said Senator Chris Coons, Democrat of Delaware. “There’s a limit to how much leadership you can show without seeing people, hearing from people, connecting with people. Joe Biden has always been at his best when people can feel and see his empathy.”

The former vice president, 77, is cautiously re-emerging onto the public landscape at one of the most volatile moments in at least a generation.

The killing of George Floyd, a black man who died last week after a white police officer knelt on his neck for nearly nine minutes, has sparked an outpouring of grief and anger across the country. Peaceful demonstrations during the day have turned chaotic at night as images of American cities, under curfew and on fire, blanket the airwaves.

The country, Mr. Biden said, required “leadership that can recognize pain and deep grief of communities that have had a knee on their neck for a long time.”

“There’s no place for violence, no place for looting, or destroying property, or burning churches or destroying businesses,” he said, noting that many people of color have been victims. “Nor is it acceptable for our police, sworn to protect and serve all people, to escalate tension, resort to excessive violence. We need to distinguish between legitimate peaceful protests and opportunistic violent destruction.”

Meanwhile, the coronavirus rages on, with more than 100,000 Americans dead, and more than 40 million people who have filed for unemployment.

Mr. Trump’s campaign defended the president’s approach to the crisis.

“President Trump has addressed the nation twice, expressed horror and sorrow for the death of George Floyd, stood with the peaceful protesters, and made it clear that he would not abide our cities being overtaken by violent, uncontrollable rioters,” the campaign said in a statement.

While Mr. Trump, with the bully pulpit of the presidency, never left public view as the virus closed much of the country, Mr. Biden spent recent months campaigning virtually, struggling to break through with his message.

But he made a public Memorial Day appearance to pay his respects to Delaware’s war dead and emerged for a Sunday walk around Wilmington, visiting the site of demonstrations and meeting with store owners, said Representative Lisa Blunt Rochester, Democrat of Delaware, who accompanied him. 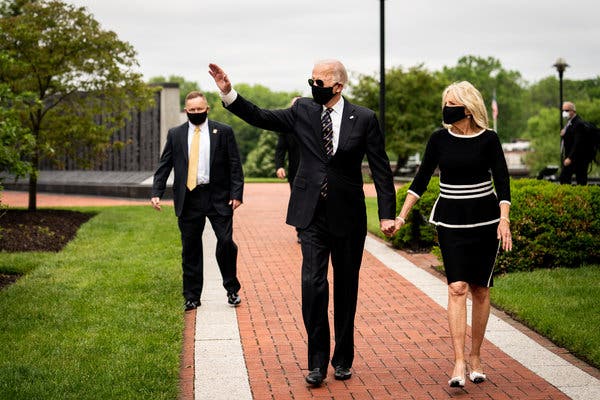 Mr. Biden and Jill Biden waved to on-lookers after they laid a wreath to pay their respects on Memorial Day in Wilmington.Credit…Erin Schaff/The New York Times

Such activity “shows you his heart and his understanding of the urgency of this moment,” Mr. Coons said. “I wouldn’t be surprised if he went to Minneapolis.”

A leader, Mr. Coons added, “takes some risks to hear people and to respect them.”

Polling shows that Mr. Biden still has work to do in communicating that image to the nation. A Washington Post-ABC poll over the weekend found that Mr. Trump bested Mr. Biden on the question of who respondents saw as a strong leader.

But the same survey had Mr. Biden with a 10 percentage point lead over Mr. Trump among registered voters. And a Monmouth University poll released on Tuesday found Mr. Trump’s approval rating at 42 percent among all Americans, his lowest marks since early fall.

Just 21 percent said the country was headed in the right direction, a drop by nearly half since March. The biggest drop in confidence came among Republicans: Only 45 percent now say the country is going the right way, down from 75 percent in March.

Mr. Biden is expected to intensify his public appearances over the next month, with his early forays in Delaware offering a model. And during his meeting with community and faith leaders on Monday, he promised that in the coming weeks he would make “very serious national speeches about where I think we have to go, what we have to do.”

Mr. Biden’s campaign advisers have engaged in fluid and evolving deliberations about how best to wade back into public activity as Delaware eases restrictions.

Campaign officials are weighing the need for sensitivity to the fraught subject matter at hand, as well as ongoing health considerations amid the pandemic, people close to the team said.

“It’s a challenge to be in this kind of environment,” said Ms. Blunt Rochester on Sunday. “We have to be careful for him and for others, and so he will continue to listen to the science.”

On Sunday he spent much of his time listening — to passers-by, to business owners, and to her own experience as the mother of a black man, said Ms. Blunt Rochester.

Mr. Biden also called mayors on the front lines of the crisis. “He asked me how I thought he could be supportive of the work we’re trying to lead nationally, and how he could be helpful in that space,” said Mayor Melvin Carter of St. Paul, Minn.

“I told him, I’ve stopped using the phrase ‘recovery,’” Mr. Carter recalled, going on to emphasize the need for transformational change on matters from health care to the economy. “January and February were not a state of stability for too many Americans.”