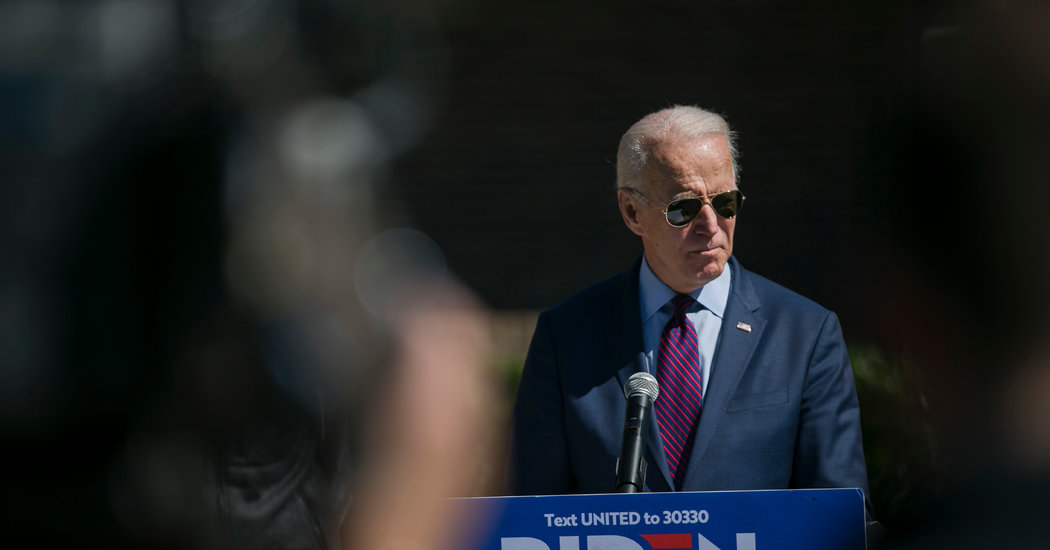 Joseph R. Biden Jr. and the Democratic Party could raise almost $1 million every single day between now and November, and he would still barely catch up to what President Trump and the Republican Party had in the bank at the start of April — let alone what Mr. Trump will have by Election Day.

New fund-raising figures released late Monday show the depth of the financial hole in which Mr. Biden finds himself at the start of the general election campaign: The presumptive Democratic nominee and his party are nearly $187 million behind the Republican National Committee and Mr. Trump, who has spent the last three years stockpiling his huge war chest.

The sheer size of Mr. Trump’s early advantage creates a unique set of financial and political pressures for Mr. Biden. He must find ways to both expand his appeal to small online contributors and attract huge seven- and eight-figure checks to the outside super PACs supporting him — all while sheltered in his Delaware home because of the coronavirus.

To lure the money that he will need to compete effectively in battleground states, Mr. Biden will have to navigate a series of consequential political decisions, refining his message, honing his policy agenda and selecting his running mate. But Democratic strategists say he has at least one point in his favor: He has wrapped up the nomination and started uniting the party relatively early in 2020, giving focus to the party activists and leading financial patrons who are singularly obsessed with defeating Mr. Trump.

“Trump’s clear lane is one of the huge benefits of incumbency, and he has used that advantage to turn the screws on every possible donor and execute a massive digital fund-raising effort,” said Jim Margolis, a Democratic strategist and veteran of past presidential campaigns. “So, yes, there will be a fund-raising imbalance, but I think Biden will have enough money to run a good campaign.”

The current cash gap at the presidential level is especially striking because down-ballot Democrats in key House and Senate races have been out-raising their Republican rivals. From competitive Senate races in Maine and Arizona to longer-shot contests in Kentucky and South Carolina, Democratic candidates out-raised their rivals in numerous Republican-held seats across the country in the first quarter of 2020.

Adding to the sense of fiscal strain at the top of the ticket, Mr. Biden has not yet struck an agreement to collect big checks in tandem with the Democratic National Committee (though one is expected soon); the Milwaukee host committee of the Democratic convention announced layoffs last week; and his campaign has been relatively slow to expand hiring since he seized control of the nominating contest a month ago.

Top party operatives and donors have been further distracted by a fractious turf war between leading Democratic super PACs jockeying for supremacy in the crucial and lucrative business of supporting Mr. Biden and ousting Mr. Trump on the airwaves. Even as the Biden campaign has sought to resolve the matter in recent days, some donors and advisers said they were still unsure where exactly they should be sending their checks.

Money is not always determinative in politics, especially at the presidential level. Mr. Biden won the 2020 primary despite being badly outspent. And Mr. Trump won the White House in 2016 despite spending far less than Hillary Clinton. But cash provides campaigns precious flexibility: allowing them to expand the electoral map, hire more staff members, buy more ads or even run political experiments at a moment when a pandemic has caused unprecedented societal upheaval.

Michael Halle, a former top adviser to Pete Buttigieg, said that while money could present a challenge for Mr. Biden, the coronavirus had already robbed Mr. Trump of a great advantage of incumbency: the ability to develop and plan out a political strategy. Mr. Trump had telegraphed his intent to rally around the robust economy; instead, there are record jobless claims.

“Yes, they have the money,” Mr. Halle said of the Republicans. “But to me the bigger power of incumbency is those other pieces. And those are gone.”

The good news for Democrats is that March was Mr. Biden’s best fund-raising month of the campaign by far, raising $46.7 million. The bad news: His pace slowed markedly in the second half as the pandemic gripped the nation and froze the economy. On ActBlue, which processes online donations for Democrats, Mr. Biden raised $27.3 million in the first 15 days of March — the period when he took control of the nomination race — and only $8.5 million in the final 16 days, according to new Federal Election Commission records.

Mr. Trump and his shared committees with the R.N.C. raised $63 million in March and entered April with a combined $244 million in cash on hand. Mr. Biden and the D.N.C. had $57.2 million in the bank, after accounting for unpaid debts.

After a quiet first few weeks in Wilmington, Mr. Biden has begun to ramp up his remote fund-raising schedule. His campaign has scheduled at least 14 events from mid-April to early May, including two events this week featuring former rivals, Mr. Buttigieg and Senator Cory Booker.

“We are watching Joe Biden unite the Democratic Party before our eyes, and the full weight of the Party’s resources and network will be behind him moving forward,” said Penny Pritzker, a former Commerce secretary who has been advising the campaign.

Super PACs — which can accept unlimited donations but are legally barred from strategizing with the campaign itself — will be critical to keeping Mr. Biden competitive in online and television advertising, according to Democratic strategists.

The Biden campaign’s decision last week to single out one super PAC, Priorities USA, above the others in a statement to The Wall Street Journal set off an intense round of rancor that one top fund-raiser likened to a “nuclear bomb” in the political money world. Donors, super PAC strategists and campaign officials have spent much of the last week engaged in shuttle diplomacy to smooth matters over.

Priorities USA, which has existed for the last two presidential cycles, did not support Mr. Biden in the primaries and has some vocal critics among donors who hold the group partly accountable for Mrs. Clinton’s surprise 2016 loss. Among those in Mr. Biden’s orbit who have expressed reservations in the past about Priorities is Steve Ricchetti, a senior Biden adviser and the campaign chairman.

Representative James E. Clyburn of South Carolina, a top Biden endorser and adviser, had worked with a different pro-Biden super PAC, Unite the Country, during the primaries and expressed his displeasure privately as well publicly, saying in an interview that the decision to single out one group was a “mistake.”

“I said before and I’ll say again, I didn’t know who Priorities was,” said Mr. Clyburn, the No. 3 Democrat in the House. “Unite the Country — that’s who I worked with, that’s who I’m still working with.”

As the Biden campaign considered which outside group to endorse, Unite the Country recently added Mr. Clyburn’s daughter, Jennifer Clyburn Reed, as an unpaid board member and announced an alliance with another Democratic super PAC, American Bridge 21st Century, with a goal of raising $175 million.

Those groups were disappointed with the Biden campaign’s initial endorsement of Priorities and, two days later, the campaign put out a second statement that recognized “a community of organizations that have contributions to make” in supporting the candidate. The campaign reissued that same statement for this article, and said its position had never changed and the clarification was only because of misinterpretation.

“We are pleased that the Biden campaign has recognized how critical American Bridge and its programs are to his election,” said Bradley Beychok, the president of American Bridge. “Since day one our mission has been to defeat Donald Trump and we have no plans to let up. We know our program will make a difference.”

On Friday, American Bridge announced a $15 million ad buy in Michigan, Pennsylvania and Wisconsin over the next two weeks. On Monday, Priorities USA announced $65 million in its own ad reservations for the fall in six states.

The day that the Biden campaign signaled its support of Priorities USA, the group announced a new “partners advisory council” that included Jennifer Granholm, the former governor of Michigan and the chairwoman of American Bridge. But Ms. Granholm was so frustrated with the rollout and announcement that she had told people she was considering resigning that new post, according to three people briefed on the matter. She has since decided to stay on.

“We believe a coordinated effort gives Democrats the best chance to win in November,” she said on Monday in a joint statement with Deval Patrick, the vice chair of American Bridge.

Priorities USA also announced that it was adding Bill Knapp, a political ad maker, to its media team, which drew attention from donors aligned with other groups. Mr. Knapp is a business partner of the top Biden adviser Anita Dunn at the firm SKDKnickerbocker. Priorities said that Mr. Knapp would only be paid a retainer and was not receiving a percentage of the group’s advertising budget. The Biden campaign said that Ms. Dunn had played no role in the blessing of Priorities as the leading super PAC.

Democratic donors are already trying to fill the financial breach. The billionaire financier George Soros directed nearly $28 million to various Democratic super PACs and organizations in the first three months of the year. Michael R. Bloomberg, the billionaire former mayor of New York City, redirected $18 million of leftover funds from his failed 2020 campaign to the D.N.C. There are typically far stricter limits on party donations, but Mr. Bloomberg pioneered a loophole to give the vast sum as a former candidate.

Despite the super PAC infighting, Democrats have taken solace in the swiftness of the party’s unification. Senator Bernie Sanders not only offered a full-throated endorsement last week to Mr. Biden, his former rival, but also later said it would be “irresponsible” for his supporters to not line up behind the former vice president. Former President Barack Obama followed with his own formal backing, as did Senator Elizabeth Warren. Those two endorsements sparked more than $5 million in donations over two days, Mr. Biden told donors, one of his strongest stretches of the campaign.

“Time is a much more precious resource than money, and he just had a lot of time handed over to him,” said Robby Mook, who served as Mrs. Clinton’s campaign manager, noting that Mr. Sanders formally endorsed Mr. Biden three months earlier than he lined up behind Mrs. Clinton in 2016.