He was the youngest speaker at the March on Washington in 1963. More than half a century later, he stood outside the White House surveying the words “Black Lives Matter” painted on a street. John Lewis’s story was in many ways America’s story and testament to its unfinished journey.

Lewis, a titan of the civil rights movement, died on Friday at the age of 80, severing a vital link with the generation that rose in the 60s to resist the US’s version of racial apartheid. The news was met with a depth of grief normally reserved for former presidents. Lewis transcended party politics and was truly admired and beloved.

He grew up on a farm in rural Alabama, a short walk from the cotton fields of the Jim Crow south. Lewis, who had ambitions to be a minister, tried out his oratory by preaching to the family chickens. He went to segregated public schools and was denied a library card because of the colour of his skin, but he was an avid reader of books and newspapers and was inspired by the sound of Martin Luther King’s sermons on the radio.

Lewis wrote to King seeking support to become the first black student at his local college, and became a fellow advocate of nonviolent protest, civil disobedience and, as he put it to the end, “good trouble”. But this was never to be mistaken for a lack of radicalism or willingness to put himself on the line: he was arrested 40 times from 1960 to 1966.

This made him, aged 23, an organiser of the March on Washington for Jobs and Freedom in 1963. “We do not want our freedom gradually, but we want to be free now,” he told the huge crowd from the steps of the Lincoln Memorial, shortly before King delivered his “I have a dream” speech.

Two years later, truncheon-wielding state troopers beat Lewis and fractured his skull as he led 600 protesters over the Edmund Pettus Bridge in Selma. TV images of the state-sponsored carnage stunned the nation, paving the way for the landmark Voting Rights Act.

Lewis wrote in his memoirs: “The American public had already seen so much of this sort of thing, countless images of beatings and dogs and cursing and hoses. But something about that day in Selma touched a nerve deeper than anything that had come before.” A campaign is under way to rename the bridge after Lewis, who returned there often.

He took the battle for equality to the halls of Washington, winning a seat in the House of Representatives in 1986 and becoming known as the conscience of the US Congress, where he represented a Georgia district for 33 years.

Visitors to his office, brimming with photographs and memorabilia, were treated to anecdotes, humility and wisdom in his soft, slow southern lilt. He fought many losing policy battles but, even as an old lion in his 70s, he was leading a sit-in protest in the House chamber demanding tougher gun controls. 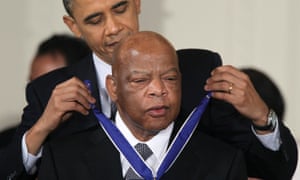 John Lewis is presented with the Medal of Freedom by Barack Obama in 2010. Photograph: Alex Wong/AFP/Getty Images

He lived to see the election of the US’s first black president, Barack Obama, then a racial backlash in the form of Donald Trump, and then an eruption of mass protests against racial injustice that both echoed and dwarfed the marches of the 1960s.

Lewis refused to attend Trump’s inauguration or State of the Union addresses. In one of his final media appearances after being diagnosed with advanced pancreatic cancer, he walked a street near the White House painted with a Black Lives Matter mural.

He saw the movement as another chapter in the cause that was his life’s work, inspiring countless younger men and women. “Generations from now,” said Obama, presenting the 2010 medal of freedom to Lewis, “when parents teach their children what is meant by courage, the story of John Lewis will come to mind – an American who knew that change could not wait for some other person or some other time; whose life is a lesson in the fierce urgency of now.”