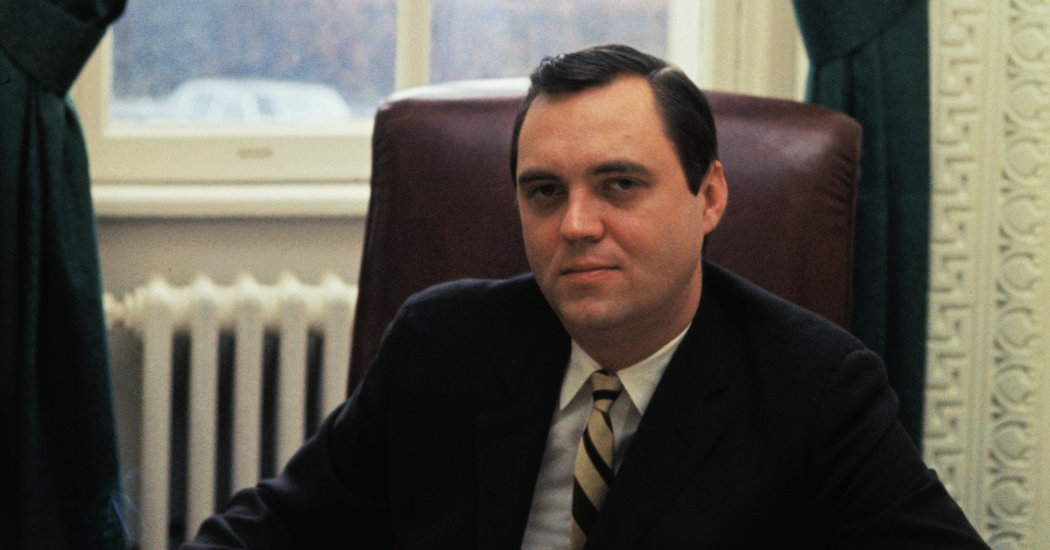 John P. Sears, a Republican political strategist who worked for Richard M. Nixon and Ronald Reagan and was fired by both, died on Thursday in Miami. He was 79.

His son, James, confirmed the death. He said Mr. Sears had a heart attack.

Frequently referred to in the news media as a modern-day Machiavelli or Rasputin, Mr. Sears was only 28 in 1968 when he served as deputy director of field operations for Nixon and helped him secure the Republican presidential nomination. He then worked briefly as deputy counsel in the White House.

But he was perceived as overly ambitious and not deferential enough to the Nixon crowd; the administration even had his phone tapped. Within a year, he was fired.

The firing was actually a blessing: It removed Mr. Sears from the Watergate scandal, which led to Nixon’s resignation as president.

Watergate claimed so many of Mr. Sears’s erstwhile rivals inside the Nixon camp that for a time he was presumed to be “Deep Throat,” the secret source who helped The Washington Post unravel the scandal. He was also friendly with reporters.

Mr. Sears was even identified as Deep Throat by Leonard Garment, a well-respected top Nixon adviser, in his book “In Search of Deep Throat” (2000). But in 2005, Mark Felt, a former deputy F.B.I. director, revealed himself to have been the secret source.

Mr. Sears was offended that anyone would think he was Deep Throat. “If I was going to talk to a reporter, I wouldn’t slink around a garage,” he told his son. “I’d meet them at a bar.”

Mr. Sears returned to politics in 1976 to manage Reagan’s bid for the Republican nomination. “John is the best one‐on-one communicator in political matters in the country today,” James Lake, Mr. Reagan’s press secretary, told The New York Times in 1976.

Mr. Sears’s dubious claim to fame in that campaign was that he advised Reagan, who was the underdog, to name Senator Richard Schweiker, a liberal from Pennsylvania, as his running mate and to announce his pick before the convention — even though he did not have enough delegates to claim the nomination. That presumptuous move did not work, partly because Mr. Schweiker had no traction in drawing delegates. Reagan lost the nomination to Gerald R. Ford, who had become president when Nixon resigned in 1974.

But the Schweiker strike earned Mr. Sears high marks for boldness and creativity.

“He was a master strategist,” Mark Shields, a Democratic political commentator who sometimes appeared on television talk shows with Mr. Sears, said in a phone interview on Friday. “But he didn’t suffer fools, and that was his ultimate undoing.”

Mr. Sears helped run Reagan’s successful bid for the nomination in 1980. But he was fired during the New Hampshire primary just before the returns came in showing that Reagan had crushed George H.W. Bush.

Mr. Sears had run afoul of Reagan’s California team, including Reagan’s wife, Nancy, who found him overly controlling and viewed him as preventing Reagan from being himself. Reagan even told the presidential historian Theodore H. White, “There was a feeling that I was just kind of a spokesman for John Sears.”

At a news conference after he was fired, Mr. Sears, whom The Washington Post called “the spurned Machiavelli of Republican politics,” described the Reagan campaign as torn by internal rivalries. He also said that the candidate was unprepared on the issues.

“He got tagged as the guy who wouldn’t let Reagan be Reagan,” James Sears said in a phone interview. “He was accused of diluting the message to appeal to the middle.”

Even though he was fired, Mr. Sears said he still supported Reagan for president.

“I’m supposed to have a reputation as a coldblooded politician,” he said at the news conference. “But I’ve been in this business 15 years, and I can tell you, this particular election is more important than any I’ve seen before.”

Reagan went on to win the election in November in a 44-state landslide, ousting President Jimmy Carter, a Democrat.

John Patrick Sears was born on July 3, 1940, in Syracuse, N.Y. His father, James Louis Sears, was a dairy farmer and banker. His mother, Helen Mary (Fitzgerald) Sears, was a teacher and guidance counselor.

He grew up on a farm in Baldwinsville, N.Y., near Syracuse. When he was 10, he had the horrific experience of seeing the family barn accidentally burn down with his father inside.

A smart student, he skipped two grades in high school and was 16 when he began college at Notre Dame. He earned a bachelor’s degree in chemistry there in 1960, thinking he would be a psychiatrist. But after running a friend’s campaign for senior class president, he was bitten by the political bug. He got a law degree at Georgetown in 1963.

He married Carol Osborne in 1962, and they had three children. She died in 2011. In addition to his son, he is survived by two daughters, Ellen Rayhill and Amy Nichols, and nine grandchildren, as well as two sisters, Mary Helen Sears and Eleanor Fala.

After law school, Mr. Sears clerked for Judge Adrian P. Burke of the New York State Court of Appeals, where he became friendly with another clerk, Mario M. Cuomo, who would become governor of New York. Although Mr. Sears was a Republican, his friendships with New York Democrats like Mr. Cuomo and Senator Daniel Patrick Moynihan always made him suspect in the eyes of conservatives.

“He was never crosswise with Democrats just because they were Democrats,” James Sears said. He was a pragmatist and a strategist, he said, not an ideologue. “He just wanted to win.”

After his clerkship, Mr. Sears joined Nixon’s Manhattan law firm, Nixon, Mudge, Rose, Alexander, Guthrie & Mitchell. After he was fired from the Nixon White House, he returned to private practice, joining the Washington law firm Gadsby Hannah, where he worked from 1970 to 1976.

He left politics after the 1980 Reagan campaign, though he went on to serve as a political analyst on NBC’s “Today” show and elsewhere.

He joined with a Democratic lawyer, Philip Baskin, to form the law firm Baskin and Sears. Mr. Sears left in the mid-1980s after critics made an issue of his having represented South Africa’s apartheid government.

He later started his own small firm. Representing the tobacco companies, he helped facilitate the settlement between the tobacco industry and the states. Many state attorneys general had to be convinced that the settlement was good for their states (and wouldn’t hurt their careers).

“John was always wise beyond his years and beyond his peers,” Mr. Shields said. “He was good company, he could make you laugh, and he always made you think.”