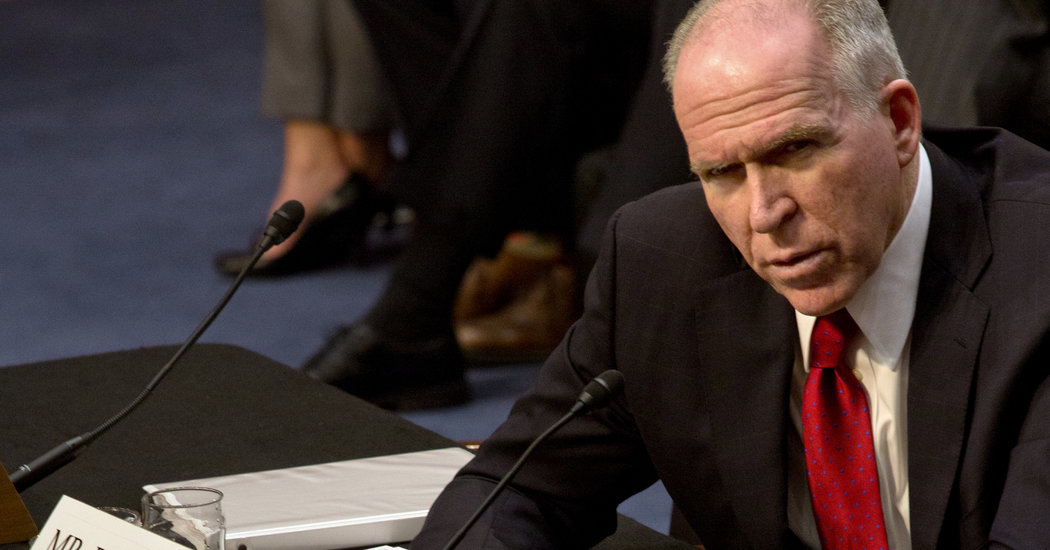 WASHINGTON — Trump administration officials investigating the government’s response to Russia’s election interference in 2016 appear to be hunting for a basis to accuse Obama-era intelligence officials of hiding evidence or manipulating analysis about Moscow’s covert operation, according to people familiar with aspects of the inquiry.

Since his election, President Trump has attacked the intelligence agencies that concluded that Russia secretly tried to help him win, fostering a narrative that they sought to delegitimize his victory. He has long promoted the investigation by John H. Durham, the prosecutor examining their actions, as a potential pathway to proving that a deep-state cabal conspired against him.

Questions asked by Mr. Durham, who was assigned by Attorney General William P. Barr to scrutinize the early actions of law enforcement and intelligence officials struggling to understand the scope of Russia’s scheme, suggest that Mr. Durham may have come to view with suspicion several clashes between analysts at different intelligence agencies over who could see each other’s highly sensitive secrets, the people said.

Mr. Durham appears to be pursuing a theory that the C.I.A., under its former director John O. Brennan, had a preconceived notion about Russia or was trying to get to a particular result — and was nefariously trying to keep other agencies from seeing the full picture lest they interfere with that goal, the people said.

But officials from the F.B.I. and the National Security Agency have told Mr. Durham and his investigators that such an interpretation is wrong and based on a misunderstanding of how the intelligence community functions, the people said. National security officials are typically cautious about sharing their most delicate information, like source identities, even with other agencies inside the executive branch.

Mr. Durham’s questioning is certain to add to accusations that Mr. Trump is using the Justice Department to go after his perceived enemies, like Mr. Brennan, who has been an outspoken critic of the president. Mr. Barr, who is overseeing the investigation, has come under attack in recent days over senior Justice Department officials’ intervention to lighten a prison sentencing recommendation by lower-level prosecutors for Mr. Trump’s longtime friend Roger J. Stone Jr.

Appearing on MSNBC’s “Hardball” on Thursday evening, Mr. Brennan was asked to respond to this article. He both dismissed Mr. Durham’s apparent line of inquiry and portrayed it as dangerous.

“It’s kind of silly,” Mr. Brennan said. “Is there a criminal investigation now on analytic judgments and the activities of C.I.A. in terms of trying to protect our national security? I’m certainly willing to talk to Mr. Durham or anybody else who has any questions about what we did during this period of 2016.”

But, Mr. Brennan added, “It clearly, I think, is another indication that Donald Trump is using the Department of Justice to go after his enemies any way he can.”

The Durham investigation has rattled current and former intelligence officers. Little precedent exists for a criminal prosecutor to review the analytic judgment-making process of intelligence agencies, said Michael Morrell, a former acting C.I.A. director who left the government in 2013.

“This whole thing is so abnormal,” Mr. Morrell said.

Prosecutors are ill equipped to assess how analysts work, he added. “The bar for making a legal judgment is really high. The bar for an analytic decision is much lower,” Mr. Morrell said. “So he is going to get the wrong answer if he tries to figure out if they had enough information to make this judgment.”

But other intelligence officials, according to an American official, are reserving judgment about Mr. Durham, who previously spent years investigating the C.I.A. over its torture program and its destruction of interrogation videotapes without charging anyone with a crime. Two detainees died in the agency’s custody.

Mr. Durham is a longtime federal prosecutor who has repeatedly been asked, under administrations of both parties, to investigate accusations of wrongdoing by law enforcement and intelligence agencies. Mr. Trump appointed him as the United States attorney for Connecticut in 2018.

The Justice Department has declined to talk about Mr. Durham’s work in meaningful detail, but he has been said to be interested in how the intelligence community came up with its analytical judgments — including its assessment that Russia was not merely sowing discord, but specifically sought to help Mr. Trump defeat Hillary Clinton in the 2016 election.

The Justice Department inspector general, who released the results late last year of an inquiry into aspects of the F.B.I.’s Russia investigation, found no documentary or testimonial evidence senior law enforcement and intelligence officials had engaged in a high-level conspiracy to sabotage Mr. Trump, the narrative the president and his supporters continue to embrace.

Mr. Durham’s questions shed additional light on where he may be going.

In recent months, Mr. Durham and his team have examined emails among a small group of intelligence analysts from multiple agencies, including the C.I.A., F.B.I. and National Security Agency, who worked together to assess the Russian operation. Investigators have interviewed those analysts and their supervisors about the motivations behind several episodes in which some sought access to delicate information from the other agencies and were told — initially, at least — that they could not see it.

One fight, they said, concerned the identity and placement of a C.I.A. source inside the Kremlin. Analysts at the National Security Agency wanted to know more about him to weigh the credibility of his information. The C.I.A. was initially reluctant to share details about the Russian’s identity but eventually relented.

But officials disagreed about how much weight to give the source’s information, and the intelligence community’s eventual assessment apparently reflected that division. While the F.B.I. and the C.I.A. concluded with “high confidence” that President Vladimir V. Putin of Russia was specifically trying to help Mr. Trump win the election, the National Security Agency agreed but said it had only “moderate confidence.”

The informant and his family were extracted from Russia in 2017 and resettled in the United States. Notably, the source had initially refused to leave when American officials proposed getting him out for his own safety, raising suspicions about whether he might be a double agent. It is not clear whether Mr. Durham has interviewed the informant.

A second fight that Mr. Durham is focused on, the people said, centered on a certain data set. The nature of the data and of the dispute remains unclear, though one person suggested that the disagreement concerned whether N.S.A. analysts could see the raw information or whether the C.I.A., before sharing it, needed to filter the data to mask names and other identifying details about Americans and American organizations.

The filtering process is a routine part of how spy agencies share foreign intelligence with each other under guidelines imposed by the attorney general. The rules permit exceptions in cases where the identities are necessary to understand the information, which can lead to disputes about whether that standard has been met.

Officials also differed over access to unclassified emails of American officials that the Russian government had previously hacked, including at the White House and State Department.

A foreign ally’s intelligence service had obtained its own copy of the stolen messages and provided drives with another reproduction of them to the United States government. Investigators, including at the F.B.I., wanted to look at those files. They argued that the Russian hackers’ chosen focus while the Kremlin’s election interference operation was gearing up might shed light on that operation.

But an index of the messages compiled by the unnamed foreign ally showed that they included emails from President Barack Obama as well as members of Congress. Mr. Obama’s White House counsel, W. Neil Eggleston, decided that investigators should not open the drives, citing executive privilege and the possibility of a separation-of-powers uproar if the F.B.I. sifted through lawmakers’ private messages.

One problem in making sense of these disputes between the intelligence agencies nearly four years later, several people said, is that officials did not caveat their emails with detailed descriptions of their motivations and rationales for balking. That has left the messages open to multiple potential readings.

The analysts could have been engaged in standard bureaucratic behavior like obeying the filtering process or hoarding sensitive information. Or perhaps they were trying to cover something up. The questions asked by Mr. Durham and his team suggest they are looking for any potential basis to support making the latter reading, officials said.

Mr. Durham also asked questions that appear aimed at understanding how analysts reached their conclusion and who drove that process, the people said, and whether and how information from foreign governments or the C.I.A. played any role in stoking suspicions at the F.B.I. about Trump campaign links to Russia.

Standards issued by the Office of the Director of National Intelligence require analysts to follow procedures aimed at ensuring objective, neutral and independent evaluations of the facts.

Mr. Durham has interviewed F.B.I. officials and agents who worked on the bureau’s Russia investigation, called Crossfire Hurricane, and for the special counsel who took over the inquiry, Robert S. Mueller III. They have also interviewed C.I.A. analysts.

Mr. Durham and his team also interviewed around a half-dozen current and former officials and analysts at the National Security Agency, including its former director, the retired Adm. Michael S. Rogers, last summer and again last fall. The Intercept first reported the interviews of Admiral Rogers.

But Mr. Durham has not interviewed the former F.B.I. director James B. Comey, his onetime deputy Andrew G. McCabe or Mr. Brennan. Mr. Durham has requested Mr. Brennan’s emails, call logs and other documents from the C.I.A. to learn what he told other officials, including Mr. Comey, about his and the C.I.A.’s views of a notorious dossier of assertions about Russia and Trump associates.

Mr. Trump has targeted all three former top officials as he has sought to foster a narrative that it was illegitimate for government investigators to scrutinize links between his campaign, Russia and WikiLeaks and that he was the victim of a “deep state” conspiracy to sabotage him for political reasons — a push that led to the Durham inquiry.

News DSMW - May 7, 2021
0
We interviewed this celebrity because we think you'll like their picks. Some of the products shown are from the celebrity's own product line or a brand they are paid to endorse. E! has... ...

This Chat With Allison Holker and Her Tween Weslie Will Have You Rethinking The...

News DSMW - May 7, 2021
0
Allison Holker can still remember the moment she realized all those chats about staying true to yourself had gotten through to 12-year-old daughter Weslie Fowler. Picking up the... ...

News DSMW - May 7, 2021
0
New research led by a team at Massachusetts General Hospital (MGH) points to a promising strategy to boost tumors' intake of cancer drugs, thereby increasing the effectiveness of chemotherapy treatments. The group's findings are published in Nature Nanotechnology. ...
MORE STORIES

This Chat With Allison Holker and Her Tween Weslie Will Have...