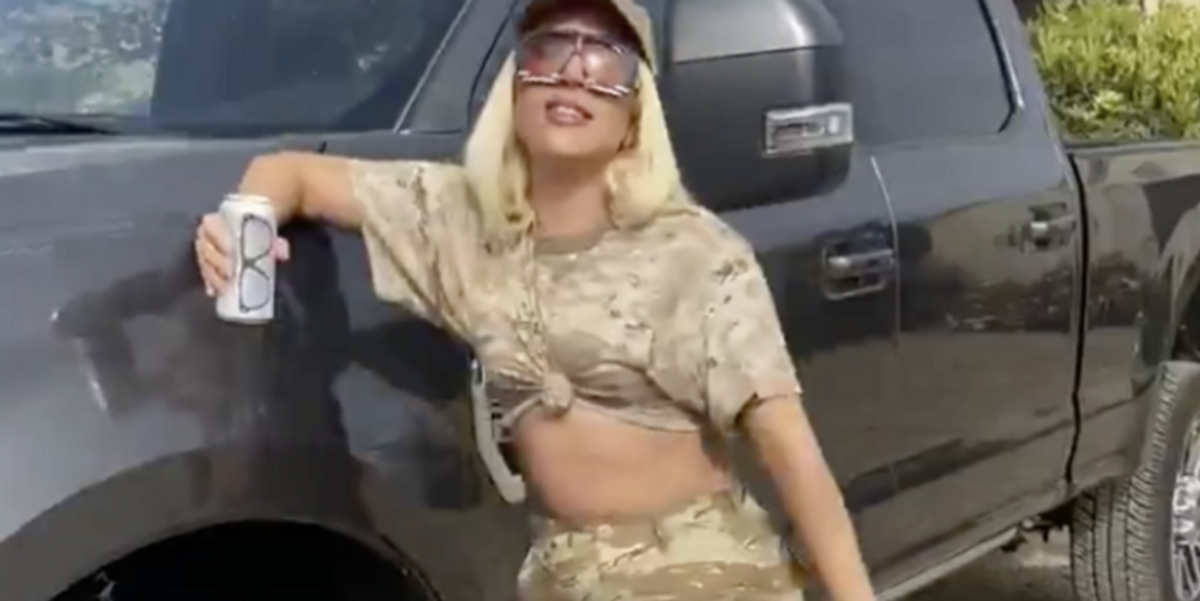 Lady Gaga posted a video endorsing Joe Biden on Saturday, but much of the feedback about the video was how the pop singer attempted to pander to rural voters in swing states that the Democratic presidential candidate needs to win the 2020 election.

Decked out in all camo with ridiculously high boots, Lady Gaga stands in front of a pickup truck on a dirt road in the video. Lady Gaga, born Stefani Joanne Angelina Germanotta who grew up in Manhattan, cracks open a beer and begins her sales pitch to middle America, where Biden needs to win a few swing states to beat President Donald Trump.

“Hey, this is Lady Gaga. I’m voting for America, which means I’m voting for Joe Biden,” she says on Twitter, where she has over 82 million followers. “And if you live in Minnesota, Pennsylvania, Georgia, Michigan, Florida, or Arizona, I encourage you to vote. And if you have a friend that lives there, tell them to vote.”

She then sips the beer, crunches the can, and throws the nearly-full brew to the ground.

The video has been viewed nearly five million times as of Sunday afternoon. Lady Gaga, who has been an outspoken Democratic supporter for years, captioned the video: “I’m voting for America.”

At the time of publication, Lady Gaga’s tweet had over 32,000 replies, many of which lambasted the pop singer for seemingly pandering to voters in states that Biden needs to win.

BlazeTV’s Lauren Chen, the host of The Pseudo-Intellectual show, said, “This is Lady Gaga trying to appeal to Middle America. HOW DO YOU DO FELLOW PICK-UP TRUCK OWNERS I LIKE BEER TOO.”

BlazeTV reporter and the host of “Slightly Offens*ve” podcast, Elijah Schaffer said, “Gross. Makes me want to vote for whoever you hate.”

DeAnna Lorraine, Newsmax political commentator, wrote on Twitter, “Cringe and Pandering level 1,000! They must be REALLY scared and desperate to whip this little gem up to sea the battleground states.. And actually think it’ll work.”

Conservative commentator Carmine Sabia stated, “Woman who sold her soul thinks this is what people in Michigan, Arizona, Wisconsin and Pennsylvania look and act like.”

“This is some next-level out-of-touch condescension vote trump,” Kyle Kashuv, conservative commentator and survivor of the Parkland school shooting, said.

“No one in her extensive entourage told her this wasn’t a good idea,” Herald Sun columnist Rita Panahi wrote.

Matt Walsh, Daily Wire writer and host, quipped, “Lady Gaga’s impression of a normal person needs a lot of work. Probably because she’s never been around one in her whole life.”

“This is why the left will lose…they’re completely out of touch with reality. They attempted to dress Lady Gaga up to be ‘relatable’ to the working class but it was FAR from reality,” social media personality Samantha Marika tweeted.

Lady Gaga also lectured her followers that they are “accountable” and that if they “want this country to be different than it is right now” then they “have got to participate in this election.”

In a Billboard interview from September, Lady Gaga said, “When you’re born in this country, we all drink the poison that is white supremacy.”