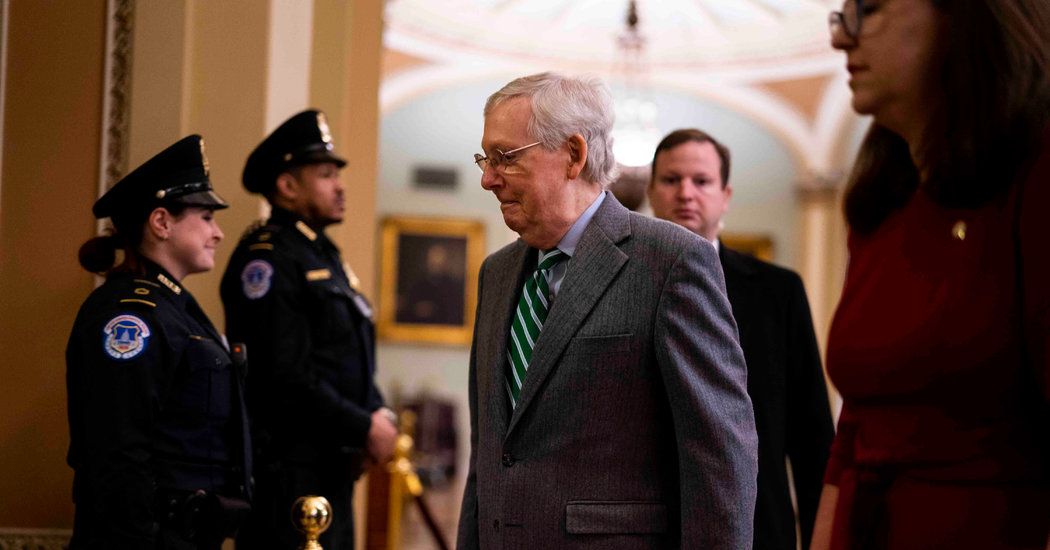 WASHINGTON — Republicans and Democrats wrangled publicly on Sunday over the shape, scope and length of the Senate impeachment trial set to reconvene on Tuesday, clashing repeatedly over the time each side will have to present its case and whether additional witnesses should be called to testify.

Senator Chuck Schumer of New York, the Democratic leader, lashed out at Senator Mitch McConnell of Kentucky, his Republican counterpart, on Sunday night in a news conference, accusing him of planning to conduct an abbreviated, unfair trial.

“Whether it’s because McConnell knows the trial is a cover-up and wants to whip through it as quickly as possible, or because he’s afraid even more evidence will come out, he’s trying to rush it through,” Mr. Schumer said. “That is wrong. And it is so wrong that no one even knows what his plan is a day and a half before one of the most momentous decisions any senator will ever make.”

Mr. McConnell has so far refused to reveal details about the resolution he will seek to pass on Tuesday setting up the rules of the trial. But Senator David Perdue, Republican of Georgia, said on Sunday that Mr. McConnell was considering a plan that would give each side 24 hours to present arguments on the floor of the Senate, but with the requirement that they do so over the course of two days.

Democrats reacted with alarm to that idea on Sunday. One aide working on the impeachment trial noted that it was scheduled to start each day at 1 p.m. and said that forcing the House managers to deliver 12 hours of arguments in a single day could push the trial into the early hours of the next morning, when few people would be watching.

In his news conference, Mr. Schumer said the president and his Republican allies were eager for a short trial because they did not want the president’s actions to be put on display for everyone to see.

“He’s afraid of what the American people might hear,” Mr. Schumer said of Mr. McConnell.

The House managers, who will serve as prosecutors in the trial, met for several hours on Sunday to strategize and refine their presentations, according to congressional aides working on the trial. Representative Jerrold Nadler of New York, the chairman of the House Judiciary Committee and one of the managers, said Sunday that the Senate must seek testimony from additional witnesses.

“It’s not negotiable whether you have witnesses,” he said on CBS’s “Face the Nation.” “And this whole controversy about whether there should be witnesses is really a question of, does the Senate want to have a fair trial, or are they part of the cover-up of the president?”

But several Republican senators on Sunday dismissed the idea of calling additional witnesses, saying it was up to the House to conduct those interviews before approving the articles of impeachment and sending them to the Senate.

“If the House isn’t prepared to go forward with the evidence that they produced in the impeachment inquiry, maybe they ought to withdraw the articles of impeachment and start over again,” Senator John Cornyn, Republican of Texas, said on “Face the Nation,” adding that it was not the Senate’s responsibility to do work that the House failed to do before voting to impeach Mr. Trump.

“This, to me, seems to undermine or indicate that they’re getting cold feet or have a lack of confidence in what they’ve done so far,” he said.

Senator Richard C. Shelby, Republican of Alabama, said his early assessment of the case against the president was that the House had not proved Mr. Trump was guilty of abuse of power or obstruction of Congress. He said senators should hear the arguments from both sides before making a decision on witnesses.

“If the case looks so flimsy, as some people say, if it’s nothing to it, it doesn’t rise to impeachable offenses, like a court of law, the court disposes of it,” he said on ABC’s “This Week.”

Some Democrats have suggested that the Senate should hear from Lev Parnas, an associate of the president’s lawyer Rudolph W. Giuliani. Mr. Parnas, who is under indictment on criminal campaign finance charges, was involved with Mr. Giuliani’s efforts to pressure Ukraine on Mr. Trump’s behalf and has provided texts, emails and other documents to House investigators.

Mr. Perdue dismissed Mr. Parnas, calling him a “distraction” and insisting that he had only secondhand information about the president’s actions.

“This is a person that’s been indicted right now. He’s out on bail,” Mr. Perdue said. “He’s been meeting with the House Intel Committee — if the House felt like this information was pertinent, I would think they would have included him in this, and his testimony in this.”

Representative Adam B. Schiff, Democrat of California, who is the lead manager in the impeachment trial, said the idea of refusing to call witnesses would be like a judge in a criminal case working with the defendant to make sure the prosecution could not call witnesses.

“No juror has ever heard that kind of thing from a judge because it would be absurd,” Mr. Schiff said on “This Week.” “It would be a mockery of a trial, not a trial, but that is what Senator McConnell to date is proposing.”

If the senators agree to seek the testimony of additional witnesses, that would most likely extend the trial for at least several weeks. Senator Lindsey Graham of South Carolina, one of the president’s closest Republican allies, said Mr. Trump was confident about the outcome of the trial but eager to have it over as quickly as possible — if possible before he delivers his State of the Union address, scheduled for Feb. 4.