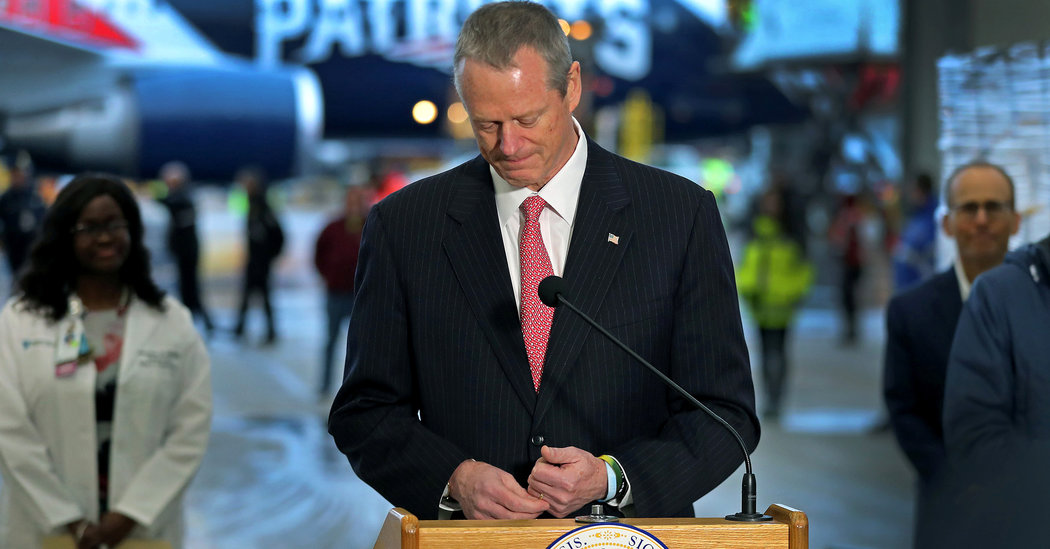 Charlie Baker, the Republican governor of Massachusetts, broke down while speaking about the death of his best friend’s mother.

Mark Meadows, President Trump’s chief of staff, has been crying frequently in meetings with White House staff, while Andrew M. Cuomo, the Democratic governor of New York, has teared up on more than one occasion during his daily televised coronavirus briefings.

After Howard Stern asked Mr. Cuomo about it — “Yes” he has cried, the governor said — a local radio show revisited the subject. “I was a little surprised by the question,” Mr. Cuomo said, noting that his father, former Gov. Mario M. Cuomo, was reluctant to admit he cried. His son was not. He had cried, he said, “about the death toll.”

Crying on the job, especially in politics, used to be considered a liability.

“We tend to like our leaders to appear confident and assured,” said Alicia Grandey, a psychology professor at Pennsylvania State University who has studied emotion in the workplace.

Crying has derailed political careers. “I used to say, Kleenex should sponsor me,” said Patricia Schroeder, a former congresswoman from Colorado, who somewhat famously broke into tears while cutting short a presidential bid in 1987, and was still receiving hate mail decades later.

Tears at work have long been discouraged: People who cry risk being perceived as less professional and less competent than their more stoic peers.

And crying has long highlighted the complicated dynamics of how people view emotion — and who gets to publicly express it. “Both genders seem weak when they cry, but for men it is much worse because it is so strongly against norms,” said Elizabeth Baily Wolf, an assistant professor of organizational behavior at Insead, a business school near Paris.

When a woman cries at work, she confirms the stereotype of women as emotional, hysterical, unable to perform under pressure. But when a man does it, he is defying the stereotype for men — strong, decisive — which can damage him even more.

“When I see a man cry I view it as a weakness,” Mr. Trump has said. As he told People magazine in 2015: “The last time I cried was when I was a baby.”(He recently described the death of a friend from the coronavirus as “a very sad thing.”)

But there are some subjects that are simply too heart-wrenching not to cry about, no matter one’s gender — and the current pandemic may be one of them.

The chief executive of Marriott gave an emotional broadcast to his employees that has been praised as a “lesson in leadership.”

Newscasters like Anderson Cooper, Don Lemon and Erin Burnett are breaking down while discussing the toll of the virus. Frontline workers are crying on the job, quarantined workers at home at their desks.

“This is about the saddest thing we’ve been through,” said Marc Tell, the chief executive of a restaurant supply distributor in New York, who said he broke down during a call with his staff last week. He has run his company through four downturns and Sept. 11, he said. “Even the toughest guys on my team — and there are some tough guys — I know that we all cry in private,” he added. “So why can’t we cry together?”

David Schiesher, a therapist in Switzerland, by way of Minnesota, said he had shed tears with scared and anxious patients. “Expressions of emotion are not weaknesses,” he said.

Kathleen Buczko, the executive director of a nonprofit in Los Angeles, cried during a board meeting with her staff — and said that “I will cry again, I’m sure.”

“I think I’d be worried about anyone who hasn’t teared up in the last month,” said Brian Stelter, the host of the CNN program “Reliable Sources,” who recently described on Twitter how he had “crawled in bed and cried for our pre-pandemic lives.”

‘They can cry for others’

Crying in public was once seen as a strength.

According to Tom Lutz, the author of “Crying: The Natural and Cultural History of Tears,” it was common in the 18th century for upper-class men to cry — in fact, “they were viewed as brutes if they didn’t,” he said.

It was only in the 19th century that the idea of male stoicism emerged, and it was not until the mid-20th century that tears were used to suggest that “candidates for public office were not manly or stable enough” to be there, Mr. Lutz said.

According to research conducted in the 1980s by the biochemist William H. Frey, women cry five times as often as men, for an average of five times per month. They also cry for longer lengths of time. Newer research has yielded similar results.

There are myriad reasons for that crying gap, including cultural conditioning — it is more acceptable for women to cry — and the fact that women’s tear ducts are anatomically shallower, leading to spillover, which makes their crying more visible.

Still, the societal expectations of men in public life — especially in politics — have traditionally been pretty clear on the crying front. Namely, do not do it.

“Crying is a nonverbal way of saying, ‘I need help and support,’” Professor Wolf said. Tears can make a leader appear more relatable and “warmer”; they can also make a leader seem helpless and less competent, she said.

The result depends largely on what judgment people have already formed of the person doing the crying.

For evidence, one may look to former Senator Edmund S. Muskie, whose 1972 presidential bid slid off the tracks after it was reported that he had cried in response to a newspaper report that criticized his wife. (It happened during a snowstorm, and a great debate ensued about whether it was a tear or a melted snowflake in his eye.)

“People were asking me to go on TV and talk about my ‘breakdown’ — my breakdown!” Ms. Schroeder said in an interview. “I was, like, ‘I stopped for three seconds.’”

For years, Ms. Schroeder kept a “crying file” in her congressional office — with news clippings of public figures who had cried publicly.

The list included politicians such as Gary Hart, a former Colorado senator, who cried when he visited his Kansas birthplace; and President Ronald Reagan, who, Ms. Schroeder said, “used to tear up every time he saw the flag.”

Her file has long since been thrown out, she said, but its current iteration might have included former Speaker John A. Boehner, whose prolific tears seemed to bring political crying into the modern era; the oft-emotional Joseph R. Biden Jr., the former vice president; or even President Barack Obama, who wiped away tears while outlining tougher gun controls in the wake of the Sandy Hook massacre.

And there would be an entry, of course, for Hillary Clinton, who notably teared up in New Hampshire during the Democratic presidential primary race in 2008 after being asked how she was faring personally. (She won the state’s primary; more than one pundit attributed that victory to her “uncharacteristic” display of emotion.)

“We have very narrow boundaries of acceptable emotional expression at work in general, and even more narrow for our leaders, male or female,” said Professor Grandey, the psychologist at Penn State.

So narrow are those boundaries that they may boil down to the literal amount of tears. A tear or two — not a sob, Professor Grandey said.

It also depends on what the emotion is about.

“In professional life,” said Mr. Lutz, the author, “you can now cry to show empathy and concern, but you can’t cry because your feelings are hurt, or because you are frustrated, or even because you are angry — however acceptable we might find such tears in our friends and family. This is true for politicians as well: They can cry for others, but not for themselves.”

‘These are the things that define today’s leaders’

Throughout the coronavirus crisis, Governor Cuomo’s briefings on the virus have featured updates on death tolls and other hard facts.

“This is not about emotion,” he said last week, of his timeline for reopening his state.

And yet, it is precisely the typically uncharacteristic displays of emotion by Mr. Cuomo and other leaders that have earned them praise, often in stark contrast to the leadership style of Mr. Trump.

(Notably, female leaders, who have been praised globally for their leadership in the pandemic, have not generally shed public tears.)

Pam Sherman, a leadership coach based in Rochester, N.Y., said she found Mr. Cuomo’s “authentic emotion” to be “required viewing” and indicative of a change in what people want from elected officials.

“The days when a politician cried and it was over for them — that’s over, ” she said. “Things like empathy, vulnerability, emotional connectedness — these are the things that define today’s leaders.”

In other words: the leadership traits that, traditionally, have been associated with women.