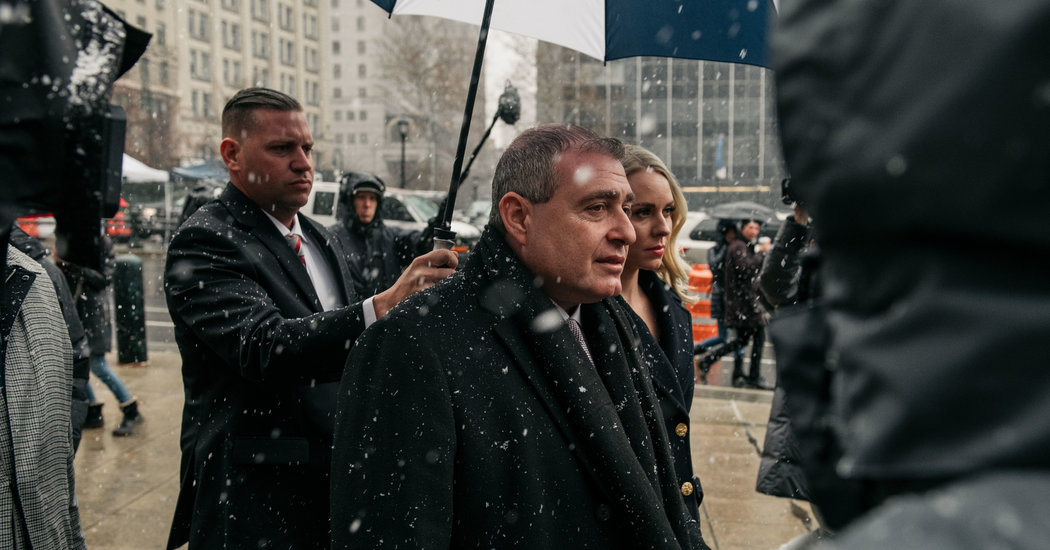 Lawyers for Lev Parnas, the Soviet-born businessman who was involved in the campaign to pressure Ukraine to investigate political rivals of President Trump, asked on Monday that Attorney General William P. Barr disqualify himself from overseeing his criminal case because he has too many conflicts of interest.

Mr. Parnas, who was charged in October in Manhattan with violating federal campaign finance laws, requested that a special prosecutor instead be appointed to handle his case.

“It is in the public interest to remove this matter entirely from the Department of Justice,” Mr. Parnas’s lawyers wrote to Mr. Barr.

The lawyers, Joseph A. Bondy and Stephanie R. Schuman, argued that federal prosecutors working for Mr. Barr should not be involved in his case because Mr. Barr had participated in some of the same activity for which Mr. Parnas was being investigated.

They asked that a special prosecutor be appointed from outside the Department of Justice.

The Justice Department and the United States attorney’s office in Manhattan, which is prosecuting the case against Mr. Parnas, each declined to comment on the lawyers’ request.

In their letter, the lawyers listed several potential conflicts for Mr. Barr, including that the transcript of Mr. Trump’s telephone conversation with President Volodymyr Zelensky of Ukraine on July 25, 2019, contained multiple references to Mr. Barr — along with Rudolph W. Giuliani, the president’s personal lawyer — “as being the point person for the Zelensky administration to work with in commencing an investigation into the president’s chief political rival,” former Vice President Joseph R. Biden Jr.

The letter also cited a reference to Mr. Barr in the Aug. 12 whistle-blower complaint that helped set off the impeachment inquiry against Mr. Trump. The complaint alleged that Mr. Barr “appears to be involved” in the pressure campaign.

Mr. Barr has not been accused of wrongdoing.

The letter was included in a filing before Judge J. Paul Oetken of Federal District Court in Manhattan, who is overseeing Mr. Parnas’s case. Mr. Bondy wrote that he had sent the letter to Mr. Barr on Monday afternoon.

Mr. Bondy, in a brief phone interview, said it would be appropriate for a special prosecutor, if appointed, to determine “to what extent to continue to rely upon” members of the Justice Department in Washington or the prosecutor’s office in Manhattan in the continuing investigation of Mr. Parnas.

It was unclear what legal recourse, if any, Mr. Parnas’s lawyers would have if Mr. Barr refused their request, seemingly a legal long shot.

The request comes as Mr. Parnas has catapulted to the center of Mr. Trump’s impeachment proceedings.

Over the last week, House Democrats have released a trove of Mr. Parnas’s text messages with Mr. Giuliani and other players in the Ukrainian pressure campaign. The records, which Mr. Parnas shared with the House Intelligence Committee, showed the extent of his involvement in the campaign, contradicting Mr. Trump’s allies who have portrayed Mr. Parnas as a peripheral player, and spurring calls for him to testify at the Senate impeachment trial.

Mr. Parnas also has gone on something of a publicity tour, granting interviews to the MSNBC host Rachel Maddow and The New York Times and taking aim at the president. In his interview with The Times, he said, “I am betting my whole life that Trump knew exactly everything that was going on that Rudy Giuliani was doing in Ukraine.”

Mr. Trump has denied knowing Mr. Parnas, and the White House has dismissed his comments as self-interested lies told by a criminal defendant.

The lawyers also said in the letter that federal prosecutors in Manhattan had refused to meet with Mr. Parnas “and receive his information” regarding Mr. Trump, Mr. Giuliani and others, “all of which would potentially benefit Mr. Parnas if he were ever to be convicted and sentenced in his criminal case.”

A formal cooperation deal, if granted by the government, can lead to a defendant’s receiving leniency when he is sentenced.

In the criminal case against Mr. Parnas, he and an associate, Igor Fruman, were arrested at Dulles International Airport as they prepared to board a flight to Frankfurt with one-way tickets.

According to a federal indictment unsealed on Oct. 10, Mr. Parnas and Mr. Fruman illegally routed a $325,000 contribution through a shell company to a political action committee that supported Mr. Trump.

Mr. Parnas and Mr. Fruman have pleaded not guilty to the charges.

In addition to the campaign finance charges he already faces, Mr. Parnas is under scrutiny for his relationship with a former Ukrainian prosecutor, Yuriy Lutsenko. The federal prosecutors in Manhattan are examining whether Mr. Parnas — as well as Mr. Giuliani — acted as unregistered foreign agents while trying to convince the Trump administration to remove the American ambassador to Ukraine, Marie L. Yovanovitch, who was at odds with Mr. Lutsenko.

Mr. Giuliani has not been accused of any wrongdoing and has said that he was acting on behalf of his client, Mr. Trump, not Mr. Lutsenko.