Here’s the idea: When the Wing is closed, it looks like any other big smartphone. Up front, there’s a 6.8-inch P-OLED FullVision screen running at 2460x 1080, plus a 32-megapixel pop-up camera. Around back, there’s what appears at first glance to be a fairly standard triple camera system: The 64-megapixel camera with an f/1.8 is the main attraction, and it’s joined by an f/1.9 13-megapixel ultra-wide camera. The first hint that something unusual is afoot is the second, 12-megapixel ultra-wide camera. Exactly why that thing is here only really becomes apparent once you open the phone.

Rather than unfolding the Wing as you would with a Galaxy Z Fold 2 or a Surface Duo, you instead flick the main screen around so it sits in landscape orientation. Only then do you see the smaller, 3.9-inch screen beneath it — this thing runs at 1,240 x 1,080, and is designed to pull double duty. You can use it to run Chrome, Twitter, or Instagram the same way you would on a regular smartphone, all while keeping a YouTube video or Google Maps directions visible on that big main screen. 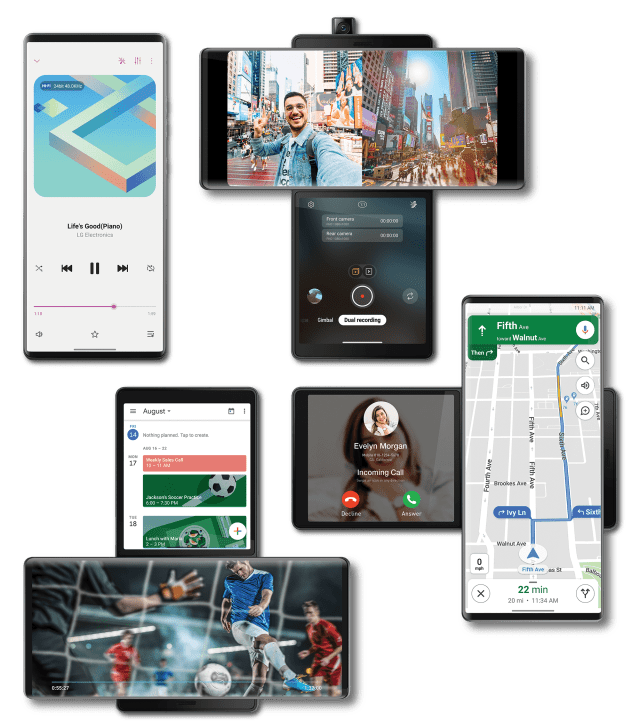 Meanwhile, other specially tuned apps can take over both displays at once — the Gallery app, for instance, can show pictures in finder detail on the big screen, leaving the smaller one available to show off editing controls or thumbnails of other photos you’ve taken. And when you’re using LG’s built-in messaging app, you can spin the whole thing around to see the message thread on the small screen while pecking out a response on the big one.

The Wing’s strange, secondary ultra-wide camera might be the best example of this both-screens-at-once approach. Once the phone is open and you fire up the camera, the Wing can become an all-in-one camera/gimbal combo, complete with an on-screen joystick for tilt shots and planning. A cluster of stabilizers is built into the Wing to help smooth out your run-and-gun footage, though it’s anyone’s guess how well they’d compare to a proper, standalone gimbal. (A quick note: The 12-megapixel ultra-wide sensor can only be used in gimbal mode since it’s actually mounted in the Wing sideways.) And if using a phone like an Osmo doesn’t exactly appeal, you can also use the secondary screen to the control the regular cameras, and even record video using the front-facing and rear cameras simultaneously.

While the Wing is about as unconventional a phone we’ve seen this year — and that’s really saying something — the stuff powering it is considerably more pedestrian. The Wing uses one of Qualcomm’s Snapdragon 765G chipsets, paired here with 8GB of RAM and 256GB of storage. (Unlike, say, the Galaxy Z Fold 2, the Wing also supports microSD cards as large as 2TB.) As the name implies, this is a fully 5G device too, with support for both mmWave and sub-6 networks. Because of that expansive network support, the Wing will be compatible with all of the major US wireless carriers — Verizon will carry it first this year, followed shortly by AT&T and T-Mobile.

There are just a few other things to note here: For one, despite its focus on media creation, the Wing doesn’t have a headphone jack. LG says this was a decision made so it could squeeze in all the bits it needed for 5G and that movable display without making the phone too cumbersome to hold. Despite not having held the thing yet, LG seems to have done a solid job on that front — the Wing is just about as thick as the LG Velvet. And speaking of that flick-open display mechanism, the company says the back of the main screen is coated in thermoplastic polyoxymethylene to keep it from scratching the small screen while in motion, and that the whole package has been tested to last for more than 200,000 swivels.