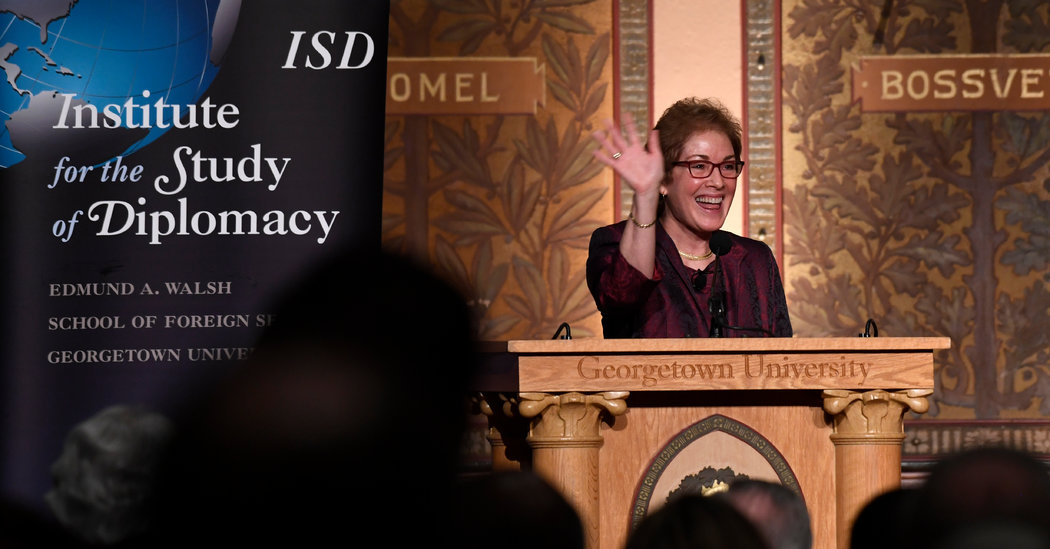 WASHINGTON — Marie L. Yovanovitch, the former ambassador to Ukraine who became a central witness in the impeachment inquiry against President Trump, delivered a candid and at times stark assessment Wednesday of the declining health of American diplomacy.

In her first public remarks since her testimony in November in the impeachment proceedings, Ms. Yovanovitch appeared before a full auditorium at Georgetown University to receive the Trainor Award. The prize, which recognized her long career as a diplomat, also acknowledged the difficult and unexpected role she played during the House investigation into the administration’s shadow diplomacy and the pressure campaign on Ukraine.

Warning the students that she would “be blunt,” Ms. Yovanovitch said that “an amoral, ‘keep them guessing’ foreign policy that substitutes threats, fear and confusion for trust cannot work.”

Her testimony, along with that of other senior diplomats and members of the National Security Council staff, described how the administration pressured the government of Ukraine to investigate the son of former Vice President Joseph R. Biden Jr., a political rival of Mr. Trump, in exchange for the release of military assistance.

Several of the people introducing Ms. Yovanovitch, including Thomas R. Pickering, another retired ambassador, commended her perseverance as allies of Mr. Trump sought to brush her aside and even denigrate her professional skills.

In December, Rudolph W. Giuliani, the president’s personal lawyer, described how he had personally advocated Ms. Yovanovitch’s removal based on his belief that she was standing in the way of his campaign to investigate the role of the younger Biden at a Ukrainian gas company. Last month, Ukraine opened a criminal investigation into whether the president’s associates had placed Ms. Yovanovitch under surveillance to monitor her and perhaps hasten her removal.

Ms. Yovanovitch also drew praise for her poise when she ultimately came under direct attack from Mr. Trump himself. In the days surrounding her testimony in the impeachment inquiry, the president unleashed a barrage of criticism against her on Twitter that raised questions about whether the comments amounted to witness tampering.

In her speech on Wednesday, Ms. Yovanovitch spoke less about her very public role during the impeachment proceedings and more about the declining impact of the State Department, where she worked from 1986 until she was abruptly recalled last year from Ukraine.

Without explicitly naming the president or other officials in the Trump administration, Ms. Yovanovitch lamented a general “hollowing out” of the department in which she spent her career. She lamented damaging budget cuts to other agencies and international organizations working toward American foreign policy goals.

“It’s not about a handout for foreign friends; it’s about enlightened self-interest,” she said. “For example, it’s hard to see how cutting funds to the World Health Organization in the middle of the coronavirus crisis keeps Americans safer.”

In a more direct evaluation, Ms. Yovanovitch also criticized the current working climate inside the State Department, where she said many long-serving officials had resigned or been forced out, high-level vacancies had gone unfilled and incoming officials were often underprepared.

Ms. Yovanovitch spoke of one positive outcome of the impeachment inquiry: greater attention to the political situation in Ukraine, where an American ally is under diplomatic, economic and military assault from Russia.

“With all the focus on Ukraine, it has meant that there is continued bipartisan support for a strong Ukraine policy,” she said. “And so I’m grateful for that because I think that’s important for Ukraine, but also for us.”

Despite her prognosis, Ms. Yovanovitch, who served under six presidents of both political parties, told students that strengthening diplomacy takes place over longer time horizons than a single administration. She urged them to make the right decision when confronted with a choice between direct orders and constitutional duty.

“At a certain point, it is harder to do the wrong thing than the right thing,” she said.