Everybody loves a good comeback story. In December, I attended Marvell’s first industry analyst day at its corporate HQ and believe that the company is well on its way to reinventing itself in a big and very positive way. The growth opportunities look immense, as well as I believe the company is poised to take advantage of the upcoming data explosion.

The “new Marvell,” as I see it, is a company characterized by its strategy, products, people and awards. Let’s take a closer look at what CEO Matt Murphy had to say at the industry analyst event. In the next few weeks, I will be diving into different areas of the strategy, customers and products.

Like many companies that been around for 25+ years, it had its share of high and low points. And it’s safe to say that 2016 was the lowest.

Perhaps the lowest came in 2016. The company launched an internal investigation by the Board’s Audit Committee and came under investigation by the SEC. Though the audit committee eventually found no evidence of fraud, it found that Marvell’s management was putting “significant pressure” on its sales teams to meet revenue targets. Additionally, it found that for some transactions revenue was booked not in accordance with its revenue recognition policies and that the company did not always fully follow its own internal controls. The company also received a letter from Nasdaq’s Listing Qualifications Staff threatening delisting over the company’s delayed filing of its Form 10-K for fiscal 2016.

In February 2016, Starboard Value, an activist investor, disclosed a stake in Marvell and claimed its shares were being undervalued.

The company also faced more stormy weather in 2016, when it agreed to pay out a settlement of $750 million to Carnegie Mellon University in order to end a patent infringement case.

As a result of all of these events, CEO Sehat Sutardja and his wife, President Weili Dai (both original founders of the company) stepped down from their roles in April 2016. The net result of these incidents was a massive loss of confidence in the company.

In June 2016, Marvell announced the appointment of Matt Murphy as CEO and President. Let me transition to the analyst event. 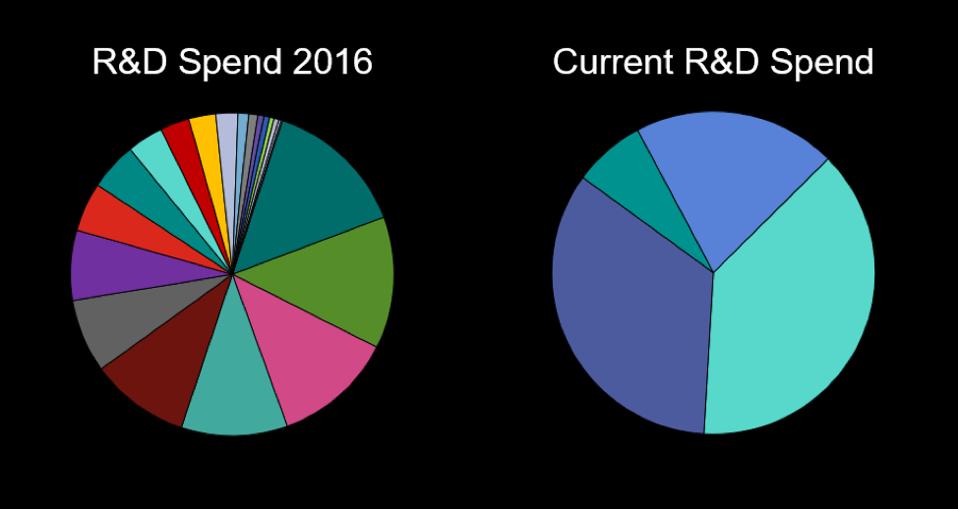 Where Marvell’s been, where it’s at, and where it’s heading reimagining the business

As this was the company’s first industry analyst day, Murphy kicked off the day sharing some basic information on Marvell. As mentioned previously, the company was founded in 1995. As of FY19, it boasts over 5,000 employees and over 10,000 patents worldwide. It’s FY19 revenue totaled approximately $2.9 billion.

Murphy then shared a graphic depicting Marvell’s R&D spend by product line in 2016, when he took the helm, vs. now, describing it then as “a company without a rudder.”

As seen in the graphic, Marvell’s R&D spending is much less fragmented and more focused now. Murphy went on to say that when he took over, Marvell’s $3.5B enterprise evaluation was clearly not representative of the company’s potential. It needed to exit or divest itself from certain product lines that weren’t working.

Starting at the end of 2016, Marvell began a 3-year pivot towards the infrastructure business, with a focus on storage and networking. It increased the scale and diversity of its networking business and added some big compute with the acquisition of Cavium in 2018, and also began to devote resources to 5G and automotive opportunities as its long-term growth potential became clear.

This past year, Marvell sold off its WiFi and Bluetooth business to NXP in a $1.76B deal. Meanwhile, it acquired Avera Semiconductor, an ASIC business, from GLOBALFOUNDRIES, and Aquantia, a pioneer in multi-gig technology for high speed networking. These deals enabled Marvell to increase its scale in enterprise networking and automotive and added the ability to build custom ASICs for data infrastructure customers.

These are some of the biggest changes I have ever seen so quickly from any chip company:

In addition to this restructuring of the company towards datacenter and edge infrastructure, Murphy also cited a reimagining of the company’s culture as part of its overall turnaround. In his words, “if we were going to scale, it needed to be on a solid foundation.”

Under Murphy’s tenure, he says he refocused the company around a results-oriented culture built on data-driven decision making—a move he says that reflects his own personal beliefs as a leader on how to run a company. According to Murphy, Marvell holds a portfolio review every year, where the company reexamines where every R&D dollar is spent.

If necessary, according to Murphy, the company is not afraid to stop or redirect projects when opportunities change. Another differentiator Murphy highlighted was Marvell’s dependable time-to-market with products.

The result of all these changes under Murphy is a company that looks drastically different than it did, even three years ago. Only half of its current workforce come from the original Marvell—all the rest joined the company from the Cavium and Avera acquisitions.

Another differentiator cited by Murphy at the analyst day was the fact that while Marvell has bigger competitors in infrastructure from a revenue standpoint, none have the “breadth, depth and focus” as Marvell. Marvell posits it is already outselling the following companies in infrastructure: NXP, Xilinx, Analog Devices, AMD, Microchip and Maxim, which leaves Intel, Broadcom, NVIDIA, and TI with higher infrastructure revenue.

The company’s new umbrella is indeed large, encompassing infrastructure storage, networking, processors and security solutions. All said and told, Marvell believes its comprehensive portfolio is well-positioned to take advantage of the $16 billion dollar market opportunity in infrastructure. I believe this is true, too. 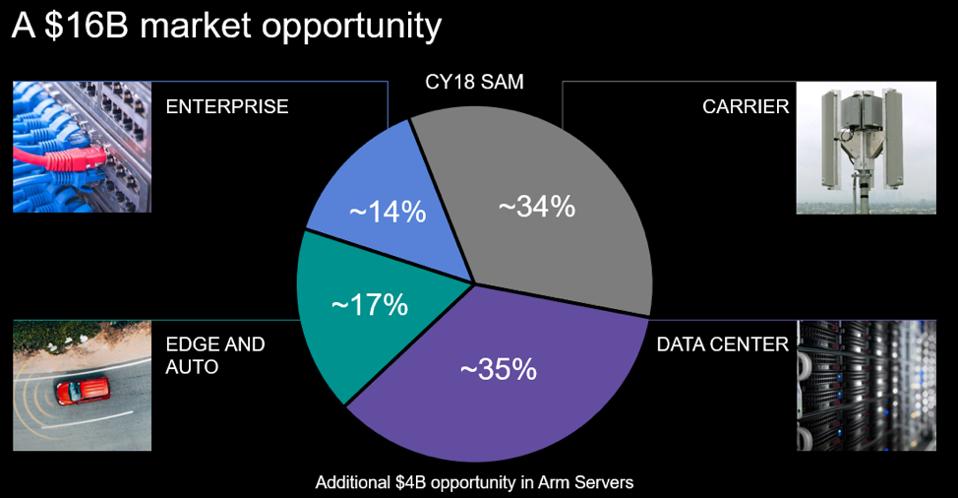 Few end customers allow semiconductor companies to say they are inside, but Marvell disclosed a few, big wins:

·     Samsung: the company has a longstanding and fruitful partnership with Samsung, who utilizes a Marvell platform for its 4G base stations serving over 1B people. The two companies announced at last year’s Mobile World Congress that they would also be partnering with Samsung on its 5G base stations.

These are but a few big and strategic wins the new Marvell has participated in.

As I say even for my own company, awards aren’t everything, but they do serve as validation that the company is on a good track. Marvell is frequently named as a top supplier by companies, including Huawei, Kioxia (Toshiba Memory) and Western Digital, and was named as one of GSA’s most respected companies in 2018. Additionally, Forbes named Marvell one of America’s best mid-size employers in the year 2018, which speaks to its revitalized company culture. It has also been named by Derwent as a Top 100 Global Innovator for the last 7 years running.

In conclusion, in one day, I went from lack of awareness and indifference to being impressed by Marvell’s comeback story and future opportunities. Despite past stumbles, under the direction of CEO Matt Murphy and his strong bench, the company seems to have really turned things around. Literally a 180.

Its focus on infrastructure is a smart move that plants it squarely in several key growth areas like 5G, AI and automotive. Intel, NVIDIA and Broadcom are formidable opponents, but I do believe the company does bring incremental advantages to the table like speed and a complete portfolio of compute, storage, networking and security offerings. Everyone likes a comeback and Marvell’s is one of the most impressive.

I will be following up with some deeper drill downs on a few areas.

Disclosure: Moor Insights & Strategy, like all research and analyst firms, provides or has provided research, analysis, advising and/or consulting to many high-tech companies in the industry. The author holds no investment positions with any of the companies cited above.