ANNAPOLIS, Md. — Larry Hogan was annoyed. On a conference call, Mr. Hogan, the Republican governor of Maryland, had just learned that several South Korean companies were ready to ship more coronavirus test kits to his state. But they were stymied because the Food and Drug Administration had not yet approved their use.

“I don’t care if we have F.D.A. approval or not,” Mr. Hogan said into a speakerphone in the governor’s reception room, where he was flanked by a container of Purell and a 9 a.m. Diet Coke, with aides sitting six feet apart around a large table. “We’ve got people dying,” he said, adding, “I don’t want to wait for permission.”

Frustrated by limited support and unclear guidance from the Trump administration, governors across the country, including some Republicans, have been squaring off with the White House and striking out on their own to secure supplies. Mr. Hogan, in his second term in a very blue state, has tried to stay miles ahead of the virus’s incursion here, like several other governors — notably Jay Inslee of Washington and Mike DeWine of Ohio — whose responses have been given better marks from Americans than the president’s.

Mr. Hogan put his health department on alert in early January when he saw the virus’s deadly crawl through China. On Monday, he issued a stay-at-home order for residents, a few weeks after declaring a state of emergency when the first three cases emerged in Maryland last month.

He is also the head of the National Governors Association, charged with representing governors’ needs at the White House, where officials wish he would find it in his heart to say a few flattering words about Mr. Trump now and then. Instead he has bluntly demanded more aid from Washington, including more test kits and supplies and help shoring up state budgets.

“We’re still not satisfied” with the federal response to states’ needs, Mr. Hogan said this week. 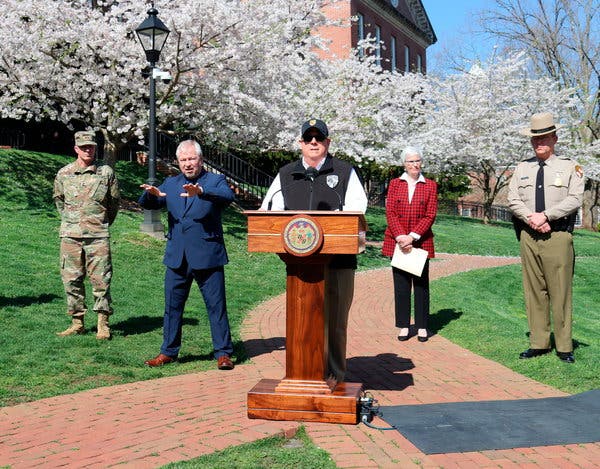 Mr. Hogan has also found himself the de facto leader of the response in the Washington, D.C., metro area, where the disease has begun its exponential march. The governor of Virginia and the mayor of Washington — a city where the death rate is well above the national average — instantly followed his order this week, grounding around 15 million residents.

As of Thursday night, there have been at least 4,697 confirmed cases and 89 deaths in the three areas combined, about triple from a week ago. The two states and Washington have an unusually intrinsic relationship; they share a metro system and are home to thousands of federal workers who are central to the region’s work force and the functioning of federal government.

Mr. Hogan’s moves have major implications for the region. He has immediately hit those defiantly socializing with some of the largest fines or criminal charges in the nation. There have already been two arrests in Maryland, including of a man who hosted a bonfire party for about 60 people after the state banned large groups.

His aggressive policing is one of several reasons Mr. Hogan has slid onto center stage among governors whose states have been hammered by the coronavirus.

This week, he collaborated with a Democratic governor, Gretchen Whitmer of Michigan, on an opinion piece pleading for federal assistance — after President Trump attacked her as “that woman.” He has been a critic of the president’s overly optimistic prognostications, saying Mr. Trump’s assurances that testing problems were a thing of the past were simply not true.

For Mr. Hogan, the need to respond quickly is also personal. He is a recent cancer survivor and over 60, which puts him in a high-risk group for the virus. His preparation for this moment, he said, was seeded in the 2015 Baltimore riots, which happened 90 days into his first term.

“I knew that taking quick decisive action was better than hesitating,” he said in a (socially distant) interview in his office on Wednesday. “I think the public was not where I was on the knowledge. There were folks saying this is no big deal, it’s not as bad as the flu, it’s going to disappear. And I was saying, ‘No, it’s worse.’”

Some Democrats in Maryland have praised him for his aggressive response.

“Look, I’m a Democrat,” said Mary Pat Clarke, a city councilwoman from Baltimore. “But the governor has done an excellent job leading the state of Maryland through the Covid-19 state of our lives. He has been regular, he has been firm, he has been clear.”

With an eye on the virus’s rampage of China, Mr. Hogan convened a special session during the governors’ meeting in February. They met with top health officials, including Dr. Anthony S. Fauci, the director of the National Institute of Allergy and Infectious Diseases, right before the governors ran to put on formal wear for a White House dinner.

“Very little was being talked about,” Mr. Hogan said. “It was sort of an eye-opener for a lot of the governors, but I think some of them still didn’t take it seriously.”

He, however, began to feel something akin to panic.

“The next day I came back to my team and said, ‘This is what I just heard, we have to get ready,’” he said. “We knew that it wasn’t going to be long before we were going to have to deal with it.”

Mr. Hogan has also leaned on his wife, Yumi Hogan, a Korean immigrant, who was also at the governor’s convention, which included a dinner at the Korean ambassador’s home. As the first Korean first lady in American history, Ms. Hogan has become something of an icon in South Korea. “I just grabbed my wife and said, ‘Look, you speak Korean. You know the president. You know the first lady. You know the ambassador. Let’s talk to them in Korean, and tell them we need their help.’” Several companies in South Korea immediately said they would send tests.

Mr. Hogan’s super-cop moves have not endeared him to some conservatives who largely populate the more southern and rural parts of the state.

“I think the bubble the Governor is in is missing something,” Gregory Kline, a longtime conservative activist in the state, said on Twitter. “There was no acknowledgment that his directions were doing harm to people greater than this disease would do or even that suffering is occurring not because of the disease but the executive fiat fighting it.”

Mr. Hogan is one of the few elected Republicans in the country who have publicly countered Mr. Trump’s early claims about the state of the virus, and more crucially about the amount of tests and ventilators available to states.

“I don’t think I’ve ever crossed the line and been rude or tried to attack or point fingers or place blame. But I have been willing to stand up when other people haven’t,” he said. He added, “Certainly some of my Republican colleagues probably might think I go too far. Some of the Democratic colleagues might not think I go far enough. But I’m not trying to place blame.”

Some officials said that the state could be faster in giving basic directives and that, like Mr. Hogan, they wished they could get more protective gear. “There are not enough supplies for health care workers and essential employees,” said State Senator Jill Carter, a Democrat.

Maryland has received far fewer N95 masks, respirators and gloves than it has requested from the federal government, according to documents released on Thursday by the House Committee on Oversight and Reform. And it has received none of the 100,000 swabs it requested for coronavirus test kits.

Mr. Hogan said his decisions were informed principally by health care professionals, many of them culled from the University of Maryland and Johns Hopkins Bloomberg School of Public Health, among other local health care providers.

Every day, there are dozens of decisions to be made over conference calls. Pay some state workers extra who have been called upon to report to work when most other Marylanders are being asked to remain home? Yes. How about for workers who check on child abuse reports? Also yes. Palm Sunday services permitted in church parking lots? Yes, but no passing of a collection plate. This debate went on for some time. “We don’t like government telling churches what to do,” Mr. Hogan said, “but we don’t want 2 million people to die.”