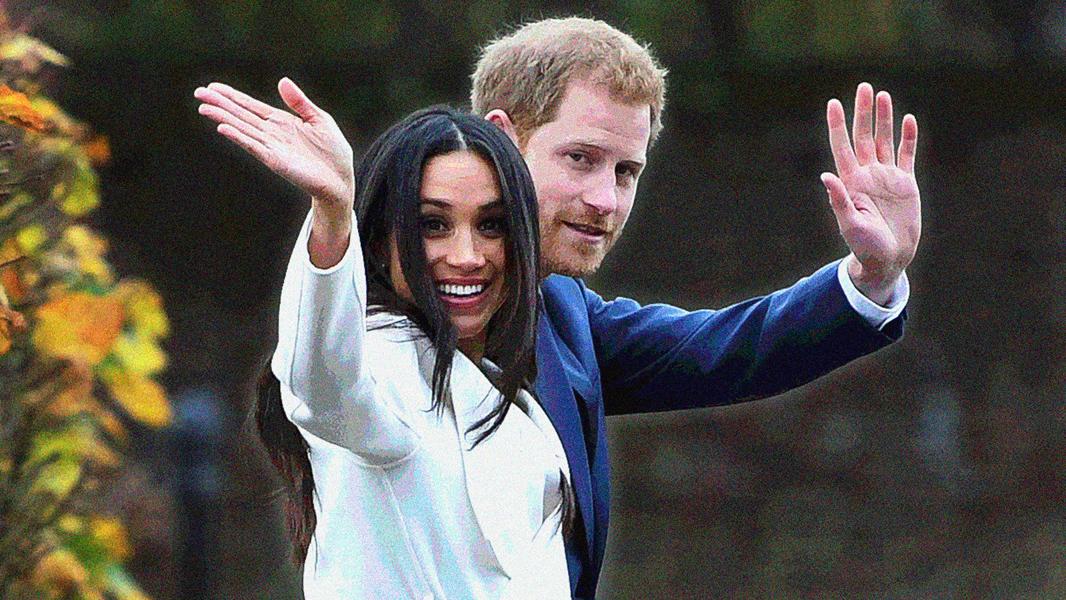 As the Duke and Duchess of Sussex leave behind their royal lives and work toward becoming plain old Harry and Meghan, the British prince and his wife will need to start earning an income. As it happens, a distant relative of his once found himself in a similar situation.

In 1922, Friedrich Wilhelm Viktor Albert, Queen Victoria’s oldest grandchild and first cousin of Harry’s great-great-grandfather, was in increasingly ill health and short on funds. The monarch formerly known as Kaiser Wilhelm II, the German emperor vanquished in World War I, had decamped from his family’s ancestral Prussian palaces four years earlier to a 12-room mansion in Doorn, Netherlands. Renovations had been expensive, and the kaiser, a germaphobe, had also ordered the place entirely fumigated. To continue supporting himself, he had sold off his yachts and staged a 65-lot auction of his personal possessions—including a silver cigarette case, carved ivory figures and a mahogany commode, among other items. The sale drew a disappointing 300-person turnout and brought in little more than $3,000 (or around $46,000 today). No one, it seemed, wanted the kaiser’s tchotchkes.

The former German monarch soon dreamed up something the world did want very badly: his memoirs. In May 1922, he publicly announced he was writing them and invited publishers to bid for their rights, setting a deadline for the following month. A frenzy ensued. Interested buyers dispatched agents via train, plane and ocean liner to a private sitting room in Berlin’s Hotel Adlon, where the kaiser’s representatives waited. A group that included the New York Times and the forerunner of what is today HarperCollins emerged the victors, concluding what the Times called “an extraordinary competition.” The winners paid approximately $250,000 ($3.9 million)—at the time, a record sum—to serialize the autobiography in the papers and as a stand-alone 15-chapter, 80,000-word book. 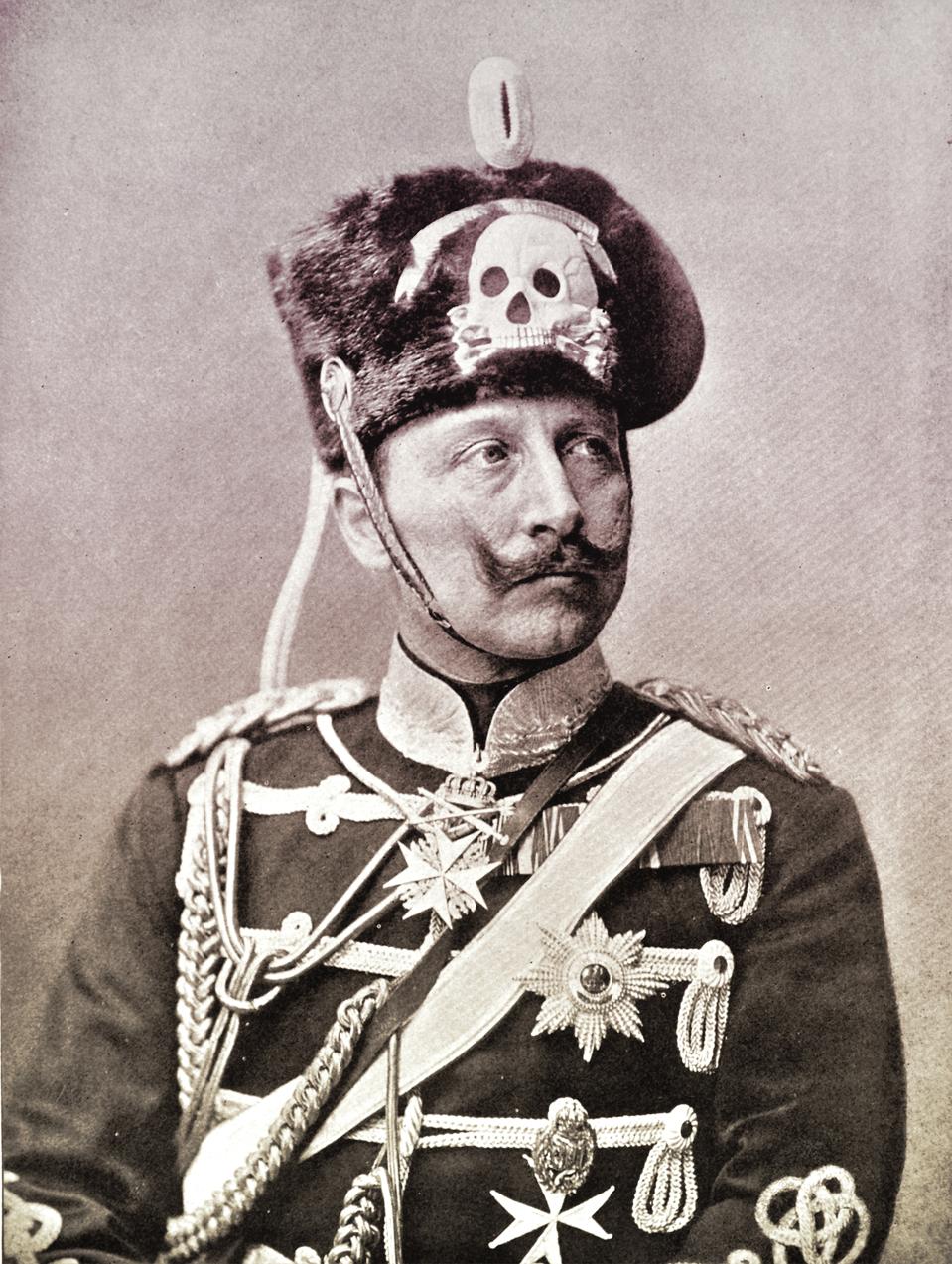 Wilhelm II ascended to the German throne at age 29 in 1888. At the end of his life, he declined the Nazis’ invitation to return home from exile.

Nearly 80 years later, there’s a similar global parlor game being played—guessing at how the kaiser’s cousins, Harry and Meghan, will earn a living. Will Meghan, a former Hollywood actress best known for her role on the TV series Suits, return to the screen? Will Harry become a lecture-circuit regular? Will Meghan design clothes with her friend Misha Nonoo? Or will they strike a production deal with Netflix?

Little is known about their exact plans. What is clear: By our estimates, they need about $3 million a year to keep up as they have. And the Sussexes have been explicit that any commercial opportunity must “uphold the Queen’s values.”

They would be wise to take a page from Wilhelm II’s book—and write one. It might be one of the only things that receives an ounce of grandmother Elizabeth II’s approval. After all, there are several centuries’ worth of royal precedent to guide them. In 1597, James I published a study on witches, Daemonologie, which supposedly informed Shakespeare’s three sorceresses from Macbeth.  Nearly 300 years later, Harry’s great-great-great-great grandmother, Queen Victoria, chronicled her trips north in Leaves from the Journal of Our Life in the Highlands—and later wrote a sequel. And Harry’s father, Prince Charles, has authored several works, including his first, a 1980 children’s book, The Old Man of Lochnagar, written a year before he married Diana.

And what readers seem to want even more than books about monarchs, or ones authored by current kings, are ones written by former royals, a thriving subgenre that extends well beyond the kaiser and has populated bookcases for more than a century. 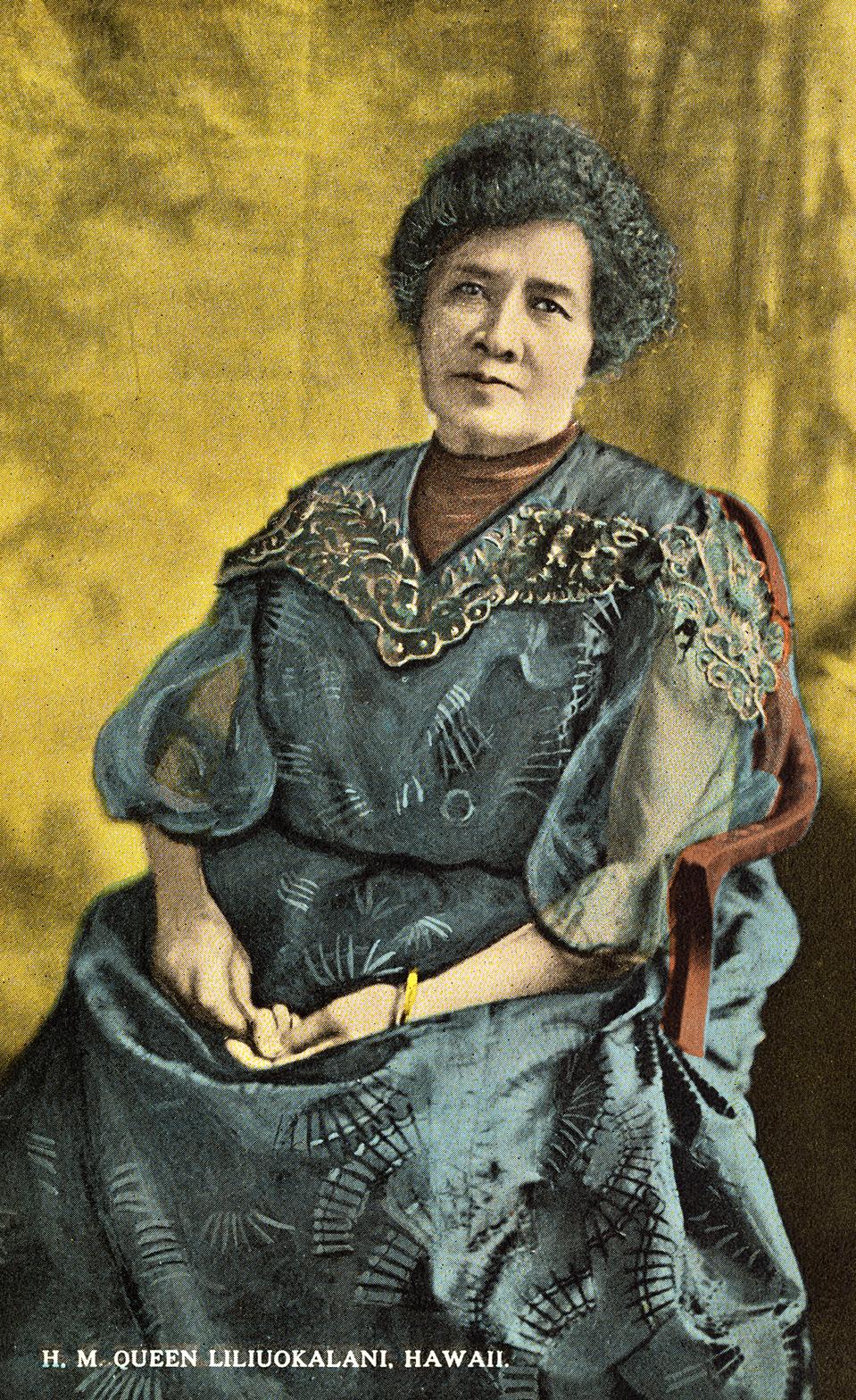 Queen Liliuokalani lost her throne after an anti-foreign tariff crippled Hawaii’s sugar industry, inducing Europeans, Americans and native Hawaiians to overthrow her and allow the islands to become part of the U.S.

Another plus for the Sussexes: Publishing can be a highly lucrative endeavor for blue bloods. There’s typically a multimillion-dollar advance and, of course, the aptly named royalties that come with tremendous sales. In Harry and Meghan’s case, the closest financial benchmark would be what American presidents and First Ladies have received after leaving office, a group who, like the duke and duchess, had been obliged to forgo any supplemental income. Bill Clinton got $15 million for his 2004 memoir, My Life, while his predecessor George W. Bush received $7 million for 2010’s Decision Points. The Obamas reportedly garnered a $65 million Penguin Random House deal in 2017 for two works. A year later, Michelle Obama’s Becoming became 2018’s bestselling hardcover, moving more than 2 million copies.

Harry and Meghan might see close to Obama-like numbers. Keith Urbahn, founding partner of Washington, D.C.-based literary agency Javelin, suspects they could get as much as $50 million for a joint multi-book contract. “It would be a landmark publishing deal,” says Urbahn. “You could see a children’s series from Meghan, a personal memoir about growing up with Diana and the royal family by Harry. Americans are fascinated with the monarchy we’ve never had. It’s an irresistible story.”

None of this is to say that writing from exile is strictly an English avocation. In 1898, Queen Liliuokalani, the deposed ruler of Hawaii who was spending much of her time in mainland America pleading for her country’s freedom, published Hawaii’s Story by Hawaii’s Queen. It came bound in scarlet cloth, emblazoned with gold wreaths and cost $2.50 (some $75 today), and was read in the far distant corners of the country.

Nearly a century later, in 1980, publisher Stein & Day reportedly paid the deposed shah of Iran, Mohammad Reza Pahlavi, a five-figure advance for his autobiography. He worked on the text, Answer to History, in Cairo, finishing the book shortly before his death that same year.

Yet Britain’s royals do seem to possess a special affinity for telling tales from outside the castle walls. King Edward VIII, who abdicated the British throne in 1936—paving the way for Queen Elizabeth’s father to become monarch—made it a veritable habit once he was demoted to Duke of Windsor.

The duke never stopped behaving like a king even after hanging up his crown, marrying American divorcée Wallis Simpson—another Meghan parallel—and moving to France. He liked the finest suits, she the best gems. Together, they enjoyed the Riviera’s beaches, Maryland’s steeplechase races, New Orleans’ Mardi Gras parties. Come the late 1950s, they would be residing in 4 Route du Champ d’Entrainement, a 14-room Parisian mansion where the likes of Aristotle Onassis, Elizabeth Taylor and the Aga Khan were known to come over for dinner. 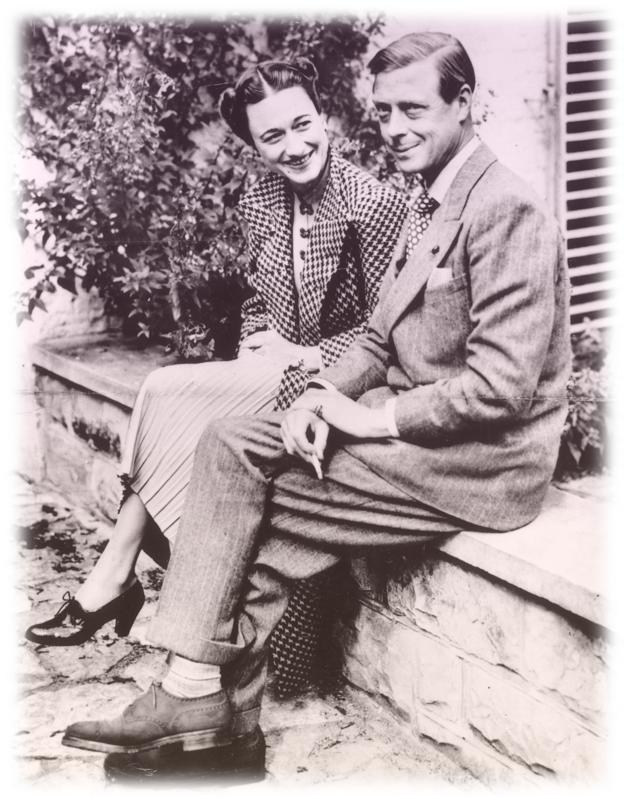 David, the eldest son of King George V, fell in love with Wallis Simpson in the early 1930s. Through careful manipulation, Buckingham Palace kept their relationship out of the British press until the very end.

As a result of all this high living, the duke and duchess were always burning through money. Figures vary on their allowance from the British government, but the duke seemed to live in perpetual fear of being cut off. An estimate from 1952 suggested he was annually getting £25,000 a year (a sum worth about $1 million today). “Everyone must work these days,” he groaned from his typewriter, sitting down to first write a four-part autobiographical Life series in 1947 and then A King’s Story five years later. London reporters at the time estimated that the Duke of Windsor had received more than $1 million ($10 million) to spill ink and family secrets for the 435-page book. It paid well enough to convince the duchess to do the same a few years later, releasing The Heart Has Its Reasons in 1956.

A different Windsor wife shocked Britain several decades later—though technically speaking, by the time My Story came out in 1996, Sarah Ferguson was an ex-Windsor. Ferguson, a.k.a. “Fergie,” had divorced Harry’s uncle Prince Andrew that same year after a lengthy, tabloid-splashed separation. She’d received a £2 million settlement in her break from Buckingham but was, reportedly, £3 million pounds in debt. She tried to fill in the gaps with a $1 million deal as a Weight Watchers spokeswoman—and with My Story.

Lord Charteris, a longtime aide to Queen Elizabeth, may have deemed Fergie “vulgar, vulgar, vulgar,” but the public wanted only more, more, more from her. My Story became a bestseller, spending seven weeks on the top of the New York Times non-fiction chart at a peak of No. 5.

If all this is not enough for Harry and Meghan to take immediate seats at their laptops, then perhaps the couple should consider the happy ending that the kaiser wrote for himself.

When his memoir, The Kaiser’s Memoirs, was finally published in fall 1922, it drew greater fire than a day at the Somme. Le Temps, a Parisian paper that later folded during the Nazi occupation, took dead aim at the kaiser, retitling his work Memoirs of a Blockhead and labeling him “the greatest criminal of our age.” 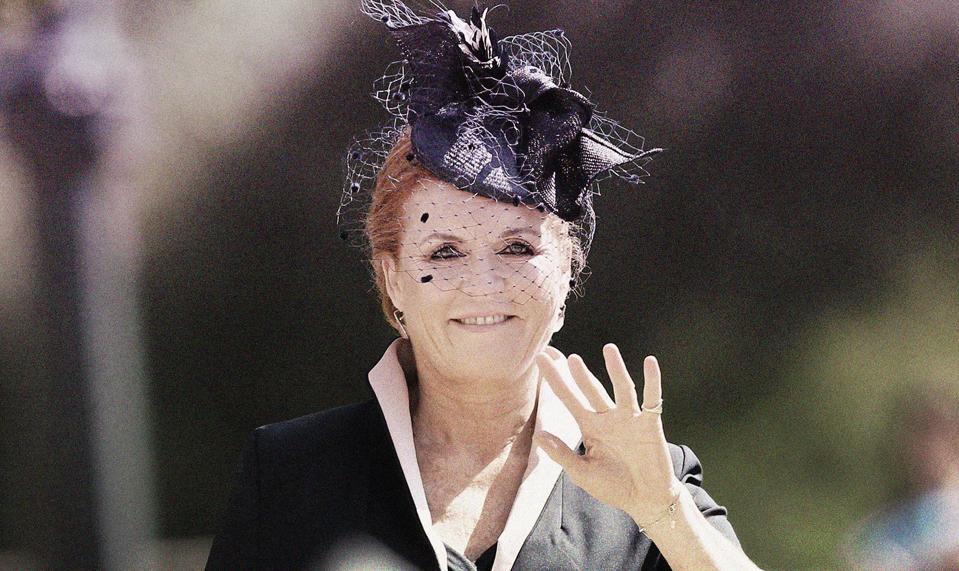 Even after being divorced for 22 years, Sarah Ferguson and ex-husband Prince Andrew still share homes, though Fergie has recently tried to distance herself from him in the wake of the prince’s involvement with disgraced financier Jeffrey Epstein.

Count von Bernstorff, a one-time German ambassador to the United States, dismissed his former ruler as having a “Bourbon mind” and a “feminine conception of things.” But none of this stopped the Times from devoting more than two dozen installments in its pages with papers as far away as Omaha, Buenos Aires and Mexico City following suit.

The book must have contributed enough to the kaiser’s coffers since he remained comfortable enough in Doorn for nearly 20 more years. There, Wilhelm II held an annual scholarly conference (he was an amateur archaeologist), plus a yearly yuletide celebration (an opportunity to practice his chief hobby—chopping wood—and bag his own Christmas tree) and a birthday party for himself each January.

In 1936, five years before his death, Wilhelm became an author again. And let this be a lesson for Harry and Meghan when it comes to selecting topics that readers actually find interesting.

The kaiser’s second work drew none of the fanfare that his earlier text enjoyed. Across 163 pages, the exiled emperor wove together years of obsession and research into Studien zur Gorgo, or Studies Concerning the Gorgon. As the book showed, the serpent-haired mythological creature had achieved a greater empire than even the former kaiser might have imagined, a continent-spanning dominion in the architecture and sculpture of places as far away as Sumatra, New Zealand and Togo.

In other words, leave the myths to mortals. Royal family drama is what sells.