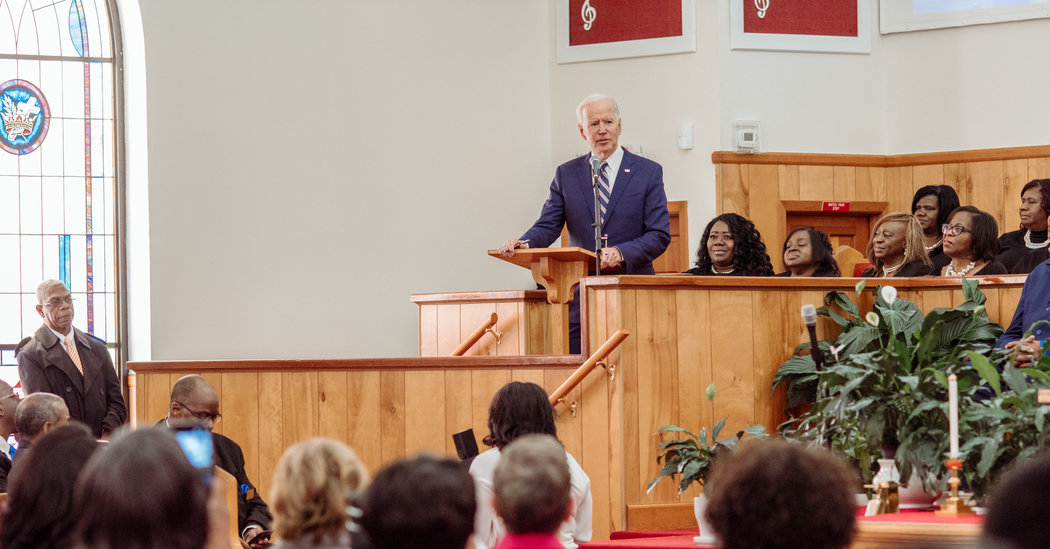 COLUMBIA, S.C. — Former Vice President Joseph R. Biden Jr. paid a visit to Sunday services at Bethlehem Baptist Church, a large black congregation here, urging the crowd to fight back against hatred and condemning President Trump in some of his strongest language yet for heightening racial divisions in the country.

“This president and his — the Ku Klux Klans and the rest of them, they think they’ve beaten us again. But they have no idea — we’re just coming back,” Mr. Biden told the congregation.

“I thought you could defeat hate,” he said. “But hate only hides. It never fully goes away,” he added, pointing to the outbreak of white supremacist violence in Charlottesville, Va., in 2017. “And they asked the president what he thought, and he said, ‘There were very fine people on both sides.’”

Referring to what he called a historic inflection point — when the police aimed fire hoses at civil rights activists in Birmingham, Ala., during the 1960s, galvanizing more of the country behind their movement — Mr. Biden said that the country had reached a similar moment.

His remarks to the 1,300-member congregation were among the strongest condemnations of the president to date in a campaign season in which a number of leading candidates have harshly criticized the president’s posture on race and immigration.

Mr. Biden also made the comments as he seeks to position himself as the inevitable Democratic challenger to Mr. Trump. One of his main rivals in the primary race, Senator Bernie Sanders of Vermont, has sought to more forcefully confront the former vice president, tangling with him in recent days over his record on Social Security.

On Sunday, Mr. Sanders continued that line of attack, saying in New Hampshire that “time and time again, Joe Biden has been clear in supporting cuts to Social Security.”

Mr. Sanders, for his part, has been trying to move on from his sudden rift with Senator Elizabeth Warren of Massachusetts. Asked at a separate event in New Hampshire on Sunday if gender remained an obstacle for female politicians, he responded “yes,” then quickly changed the subject to age.

In South Carolina on Sunday, Mr. Biden left his seat at one point during the joyful services to hug and shake hands with church members, joining them in hymns and applause. “It’s contagious when you’re in a black church,” he quipped during his 12-minute remarks to the congregation, to much laughter.

Mr. Biden was seated in the front pew with his sister, Valerie Biden Owens, and Representative Terri Sewell, Democrat of Alabama, who introduced Mr. Biden and spoke about her recent endorsement of him.

He also picked up the endorsement of the Rev. Anthony A. McCallum, the congregation’s pastor, who compared him to former President Barack Obama. “Let’s get behind this soldier,” Pastor McCallum told his congregation. “Someone who could touch all people, not just the 1 percent, but to the common folk.”

It was the first event of a Martin Luther King’s Birthday weekend visit here in South Carolina by Mr. Biden, who is aiming to cement his support in the early primary state, where polls six weeks before the election show he is the strong front-runner, at least partly on the strength of his association with Mr. Obama.

Mr. Biden, who stayed after the service for more than an hour to talk with members of the congregation, invoked the name “Barack” twice during his remarks.

On Monday, he is expected to join seven of his 2020 Democratic rivals in a King Day rally at the state Capitol, an annual event that began 20 years ago and has become practically mandatory for Democratic presidential candidates during election years as they try to win over black voters.

Other candidates also attended church services here in Columbia on Sunday morning. The only African-American candidate remaining in the race, Deval Patrick, the former Massachusetts governor, was offering remarks at nearby Bethel African Methodist Episcopal.

Both men were expected to attend a breakfast sponsored by the Urban League on Monday morning.

Campaigning on Sunday in Tulsa, Okla., the site of what is regarded as the single worst massacre of black citizens by their white counterparts in history, Michael R. Bloomberg, the former New York City mayor, recalled the slaughter of hundreds of African-Americans by white mobs in that city as well as in East St. Louis, Ill.; Elaine, Ark.; and Rosewood, Fla.

“In just that short period, from 1917 to 1923, more than 1,000 black Americans were killed by white mobs in cities and towns all across the country,” said Mr. Bloomberg, one of the few candidates who were not scheduled to appear this weekend in South Carolina as he pursues an unusual campaign strategy with a national focus. “But the truth is: What happened during that period was part of a continuum of violence that black Americans faced even after the end of slavery — violence that denied them their lives, their liberty and their pursuit of happiness.”

Mr. Biden arrived in South Carolina on Sunday morning and attended an oyster roast later in the day. A busload of surrogate campaigners had arrived earlier this past week, crisscrossing the state on a bus in what was called his “Soul of the Nation Tour.”

Speaking to predominantly black audiences at church social halls as well as in beauty shops and barber shops, the group of Biden surrogates included Randall Woodfin, the mayor of Birmingham, Ala.; Sean Patrick Thomas, an actor who grew up in Mr. Biden’s home state, Delaware; and Symone Sanders, a former spokeswoman for Mr. Sanders during his 2016 campaign who has become a top adviser to Mr. Biden.

While those attending the events in South Carolina were mostly supportive of Mr. Biden, at least two people raised questions about his role as a senator in helping write a 1994 crime bill that was regarded by many crime experts as contributing to the mass incarceration of black men.

In his church remarks, Mr. Biden recalled meeting clients near the Amtrak station in Wilmington, Del., when he was a young public defender and later standing at the same station for his inauguration as vice president in January 2009.

Forty years later, Mr. Biden said, “I was standing on that same platform waiting for a black man to come down on a train 27 miles from Philadelphia to pick this white boy up and go 127 miles down to Washington to be sworn in as president and vice president of the United States.”

Choking up when he mentioned his deceased son, Beau Biden, Mr. Biden said that on that day, he told his children that things had changed.

Mr. Biden also invoked Dr. King’s dream that all men are created equal. “Dr. King didn’t give up on the dream, and I’m asking you all, don’t give up on it,” he added. “We can defeat this moment of hate.”

Mr. Biden did not say anything at the church about his back-and-forth a day earlier with Mr. Sanders over Social Security. But Mr. Sanders returned to it during remarks with reporters on Sunday in Conway, N.H., where he leveled a broad critique of Mr. Biden’s record.

“If you run for office, you defend your record,” Mr. Sanders said. Characterizing Mr. Biden’s Senate votes authorizing military action in Iraq and on other issues, he said: “Joe voted for the war in Iraq. I vigorously opposed it. Joe voted for a bankruptcy bill, which I think has been very harmful to working families. I vigorously opposed it. Joe voted for a number of trade agreements,” like the North American Free Trade Agreement, which Mr. Sanders said undercut good jobs in the United States.

“And on the issue of Social Security, time and time again, Joe Biden has been clear in supporting cuts to Social Security,” Mr. Sanders argued, citing Mr. Biden’s support for a balanced-budget amendment in the 1990s that the Vermont senator said would have harmed the program.

And in Concord, N.H., on Sunday, Mr. Sanders addressed questions about gender during a New Hampshire Public Radio forum, noting that age and other factors could also sway voters’ decisions.

“If you’re looking at Buttigieg, he’s a young guy, people will say, ‘Well, he’s too young to be president,’” Mr. Sanders said, referring to Pete Buttigieg, the former mayor of South Bend, Ind. “‘Look at this one, she’s a woman.’”

“So everybody brings some negatives, if you like,” he went on. “I would just hope, very much, that the American people look at the totality of a candidate, not at their gender, not at their sexuality, not at their age, but at everything. Nobody is perfect. There ain’t no perfect candidate out there.”