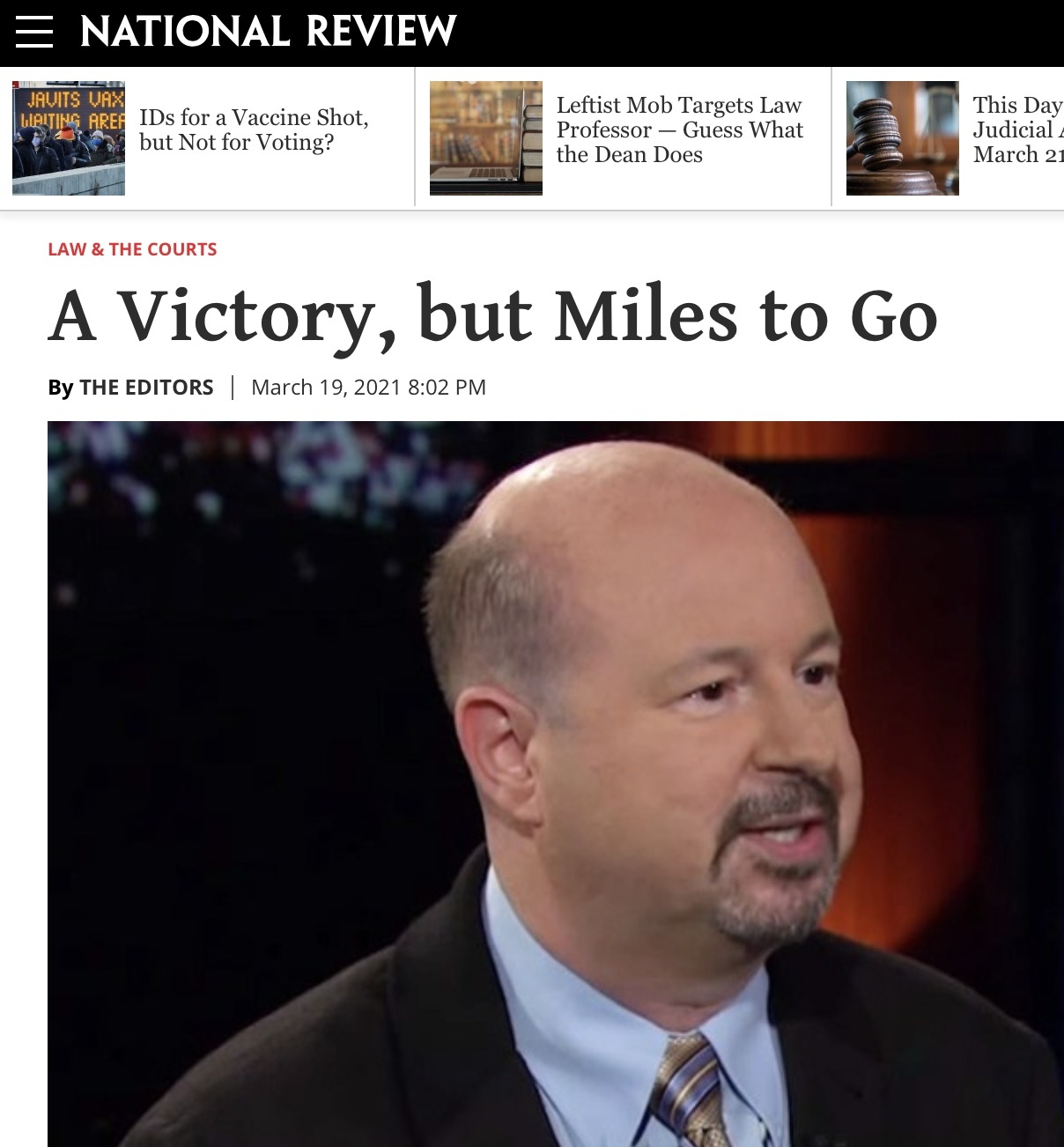 Steyn live and in person – or as live and in person as it gets in the Permanent Abnormal: Tomorrow, Tuesday, Mark will be speaking at Michele Bachmann’s conference on election integrity in the United States. It’s all on Zoom, of course, and starts at noon Eastern with Ben Carson of the Trump Administration; Kris Kobach, who should have been Trump’s immigration honcho; Hans von Spakovsky, former federal election commissioner; various secretaries of states and more. Steyn is scheduled for 4.45pm Eastern, but it’s all well worth your time, given the silence on this subject from the butch boys at Cumulus Radio and all the rest. The event is open to all, at no charge, and you can find more information here.

~We have a couple of developments on the global warm-monger front: The indispensable Marc Morano has a brand new book out this week about the Green New Deal. I’m honored to have written the introduction, and you can’t get a better endorsement than this, can you?

‘If you care about America’s future, read this book.’ — Mark Levin

~As many readers know, almost nine years ago, Michael E Mann, inventor of the once famous global-warming “hockey stick” showing that we’re all gonna fry, sued me and others for defamation over a 270-word post I wrote at National Review‘s Corner about the parallels between the two fraudulent, self-serving “investigations” that Graham Spanier’s corrupt regime at Pennsylvania State University conducted into two of its biggest faculty stars – Mann and the serial child predator Jerry Sandusky. In both investigations, President Spanier and his minions had no interest in the ugly truth, but only in the protection of their brand and income stream, in both the football and science departments. Sandusky is now in gaol, and, having exhausted his appeals, the appalling Spanier (Mann’s mentor and close friend, fulsomely thanked in the climate mullah’s latest unreadable book) will be joining him in May.

On Friday afternoon there was a momentous decision in the case hitherto known as Michael E Mann vs National Review et al. Henceforth it will no longer be known as that – because National Review is out. The District of Columbia Superior Court has granted NR’s motion for summary judgment, so Mann’s case has been dismissed with prejudice. In other words (because so many climate-change activists and their court eunuchs in the media seem to have great difficulty understanding the simplest of judicial decisions):

So this is exactly the same outcome as Mann’s other decade-long suit against my compatriot Tim Ball at the British Columbia Supreme Court:

Under the English rule (applying almost everywhere else in the Common Law world) “costs follow the event” – ie, the loser (Mann) pays the other guy’s legal bills. Under the crappy soi-disant “American rule”, such compensation rarely happens, although NR is free to petition the court for recovery of its lawyers’ fees and has indicated it intends to do so. It makes no difference either way, as Doctor Deadbeat has refused to pay Tim Ball a dime and doubtless will do the same to National Review.

Meanwhile, as is traditional, loser Mann is telling his doting Mann-boys that he hasn’t really lost at all:

Statement on Today’s Ruling Regarding Summary Judgment For the National Review:

We are currently evaluating the decision. We note that the decision was reached on a technical issue related to the interpretation of what has become a controversial statute that shields blog sites from defamation liability in some cases.

In no way does the court decision adjudicate the truth or falsity of the defamatory statements at issue. National Review did not prevail on the substance of this lawsuit.

Three of the four defendants still remain in this lawsuit and we look forward to the trial.

Well, under the lousy American system of protracted pseudo-justice, what matters is not whether you “prevail on the substance” but whether you prevail. And NR did. Mann lost.

On the other hand, I’m not unsympathetic to the vanity litigant’s characterization of the decision. National Review won on the narrow ground that I wasn’t an “employee” of the magazine and therefore that they’re not responsible for whatever defamations I publish under their shingle. I had no idea this was a thing in American law, and, if it is, I don’t know why they couldn’t have advanced it, say, seven years ago and saved us all a lot of time. As to whether it’s “a controversial statute”, it would certainly seem to have the potential of becoming a Defamer’s Charter, since all a publication would have to do (as many increasingly do do) is make all their staff writers freelance contributors and they can publish any old bollocks.

That said, NR is gone: the case is no longer Mann vs National Review et al, but Mann vs et al – which means me, CEI and Rand Simberg. That is a big blow to Mann, whose goal from the get-go was to take down perhaps the most famous institution of American conservatism. In the intervening years, of course, NR under Rich Lowry’s woeful stewardship has largely taken itself down. But here’s how Mann put it in an email to a fellow warm-monger (page four) produced during discovery:

there is a possibility that I can ruin National Review over this.

Going to talk w/ some big time libel lawyers to see if there is the potential for a major lawsuit here that will bring this filthy organization down for good.

By contrast, Mike had never heard of me – and, if he’d done his due diligence, he’d have known you have to be willing to go all the way with me because I don’t settle: My northern free-speech battles ended with the Canadian Human Rights Tribunal declining to hear any further cases under the law, and the law itself eventually being repealed by the Canadian Parliament. But, as far as Mann was concerned, I was just some no-name loser doing NR’s bidding at the behest of its Koch donors. With National Review gone, taking a decade to get to trial against yet another obscure Canadian loser surely affords Mann far less pleasure.

As for me, I’m generally wary of cases with multiple defendants, and I was particularly doubtful about standing in the dock with NR before an impressionable jury. For almost a decade, I have stood on the truth – and Rich Lowry and his guys never did, not in their court filings , but instead tossed spaghetti of sophistry at the walls hoping a strand or two would stick: Ooh, no, we’re not a publisher, just an Internet platform provider like Facebook, open to all; Steyn is nothing to do with us, just a guy who bust into the cockpit and flew the NR plane into the mountain; etc. In the course of his spaghetti-hurling, their awful splapdash lawyer Michael Carvin didn’t check nuttin’ and, even in his brief to the Supreme Court, got all kinds of things wrong, including putting other people’s words into my mouth. I am very relieved that I will not be going into court with him and Lowry.

And yet, despite getting out of the case, Rich Lowry & Co have lapsed instantly into “send more money now for our epic free-speech battle” mode. It’s almost as if, having decimated its subscriber base and destroyed its cruise business, NR has no income source left other than ballyhooing the Mann case – well, that and the clickbait ads that infest its site: If you enjoy this Victor Davis Hanson column on the Iranian nuclear program, you may also like “Hollywood’s Twenty Worst Breast Implants”. Lowry falsely claimed on Friday that they need money to pay my legal bills: That is a complete lie. If you give money to NR for their alleged free-speech crusade, it goes straight into the general fund to pay for remarkably lavish remuneration to men who have destroyed a once great American institution. For more on their collapsed cruise business and other reflections on NR, please see my recent deposition by Mann’s lawyer.

So on balance this is win-win: They’re out of the case, and I’m glad. Thus, a decade of legal sophistry has finally triumphed. Maybe standing on the truth would have worked even sooner, but we’ll never know.

Oh, I should correct that: it’s win-win-lose, with Mann bringing up the rear. Here’s my motion for summary judgment, along with its Statement of Undisputed Facts, on which the fourth trial judge has yet to rule. (NR’s motion was granted by the third trial judge. Only in America, eh?)

~It was a busy weekend at SteynOnline, beginning with the Friday edition of The Mark Steyn Show, in which Mark brought you his regular Chinese Penetration Update, news from Gibraltar and the DC courts, a Brit Wanker Copper, and a grim milestone for the Durham Report. He also celebrated the bicentennial of Sir Richard Burton and a blockbuster hit for Artie Shaw. On Saturday there were more Burtonian bicentenary offerings on our weekend movie date, while Sunday found Steyn’s Song of the Week in vernal mode. Our marquee presentation was Part Four of our audio serialization of Mark Steyn’s Passing Parade, with Mark recalling a general who jinxed his junta and a Holy Roman Emperor reduced to Euro-MP.

If you were too busy being blown over on the airplane steps all weekend long, we hope you’ll want to check out one or three of the foregoing as a new week begins.

The Mark Steyn Show and Mark Steyn’s Passing Parade are made with the support of members of The Mark Steyn Club. You can find more details about our Club here – and we also have a great gift membership.

What Was It All For?