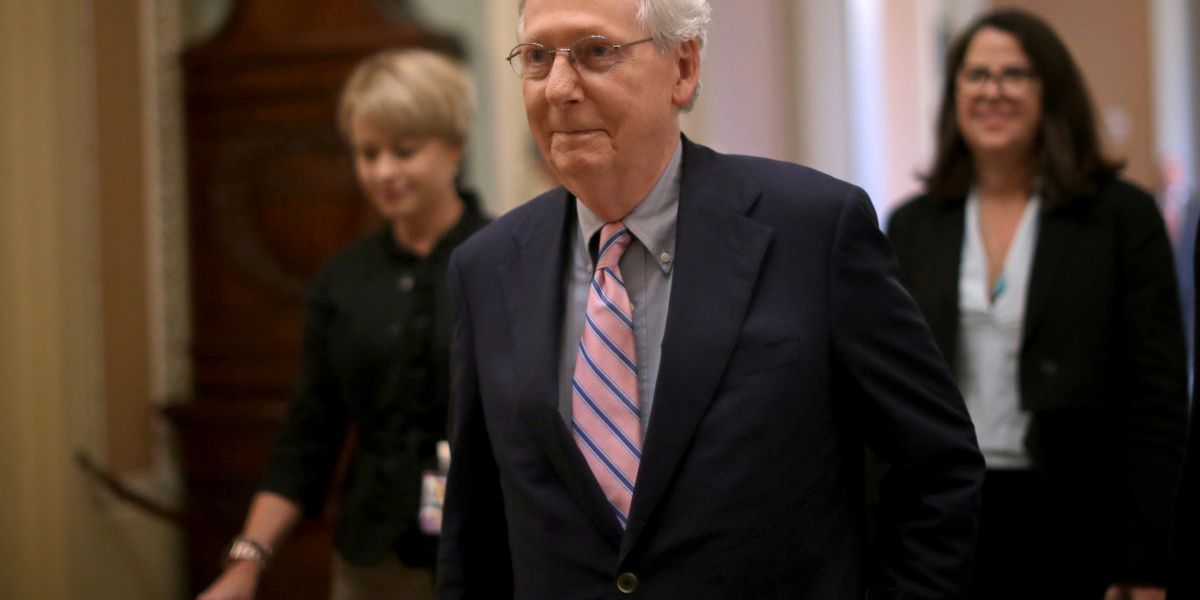 Republican Senate Majority Leader Mitch McConnell took to the floor of the Senate Monday to debunk claims that the Senate does not have sufficient time to consider a Supreme Court nominee before the general election in November.

Citing historical precedent, McConnell argued that the Senate has plenty of time to confirm a nominee and promised that there will be a vote on President Donald Trump’s nominee this year.

“President Trump’s nominee for this vacancy will receive a vote on the floor of the Senate,” McConnell said, reiterating a statement he issued Friday after the late Justice Ruth Bader Ginsburg, 87, passed away from complications due to pancreatic cancer.

“Now already, some of the same individuals who tried every conceivable dirty trick to obstruct Justice [Neil] Gorsuch and Justice [Brett] Kavanaugh are lining up to proclaim the third time will be the charm,” he continued.

Already, Democrats and some in the media have misrepresented the so-called “McConnell rule,” claiming the Republicans are hypocrites for promising to move forward with a Supreme Court nomination during an election year after previously refusing to consider President Barack Obama’s nominee Merrick Garland to fill Justice Scalia’s vacancy on the court in 2016. Though Democrats say McConnell’s 2016 position was no Supreme Court confirmations during an election year, McConnell’s actual position was that if the presidency and the Senate majority are of different political parties and cannot agree on a nominee, then the American people may resolve the matter with an election.

This year there is a GOP majority in the Senate and President Trump is a Republican president. Republicans have the constitutional power to fill a Supreme Court presidency and they say it is their obligation to do so.

McConnell also addressed “incorrect” claims that the Senate does not have time to complete the confirmation process before the election.

“We are already hearing incorrect claims that there is not sufficient time to examine and confirm a nominee,” McConnell said. “We can debunk this myth in about 30 seconds.”

“As of today there are 43 days until Nov. 3 and 104 days until the end of this Congress,” McConnell said. “The late iconic Justice John Paul Stevens was confirmed by the Senate 19 days after this body formally received his nominations — 19 days from start to finish.”

“Justice Sandra Day O’Connor, another iconic jurist, was confirmed 33 days after her nomination. For the late Justice Ginsburg herself it was just 42 days. Justice Stevens’ entire confirmation process could’ve been played out twice between now and Nov. 3 with time to spare. And Justice Ginsburg herself could’ve been confirmed twice between now and the end of the year, with time to spare.

“The Senate has more than sufficient time to process a nomination. History and precedent make that perfectly clear.”

So far only two Senate Republicans have publicly stated their opposition to confirming Trump’s nominee before the election.

Sen. Lisa Murkowski (R-Alaska) told reporters Friday she will not vote to confirm a new SCOTUS justice until after inauguration day, saying “fair is fair,” presumably in reference to Republicans refusing to confirm Garland.

Sen. Susan Collins (R-Maine) issued a statement Saturday giving her support to holding confirmation hearings on Trump’s nominee before the election but opposing a confirmation vote until afterward.

“In order for the American people to have faith in their elected officials, we must act fairly and consistently — no matter which political party is in power. President Trump has the constitutional authority to make a nomination to fill the Supreme Court vacancy, and I would have no objection to the Senate Judiciary Committee’s beginning the process of reviewing his nominee’s credentials,” she said.

“In fairness to the American people, who will either be re-electing the president or selecting a new one, the decision on a lifetime appointment to the Supreme Court should be made by the president who is elected on November 3rd.”

On Friday, Sen. Mitt Romney’s (R-Utah) communications director Liz Johnson refuted a claim that Romney “committed” to not confirming a nominee until after Inauguration Day.

This is grossly false. #fakenews https://t.co/HZuqAyYToz

Romney is reportedly waiting to meet with Sen. McConnell at Tuesday’s GOP conference lunch before making a statement on his position.