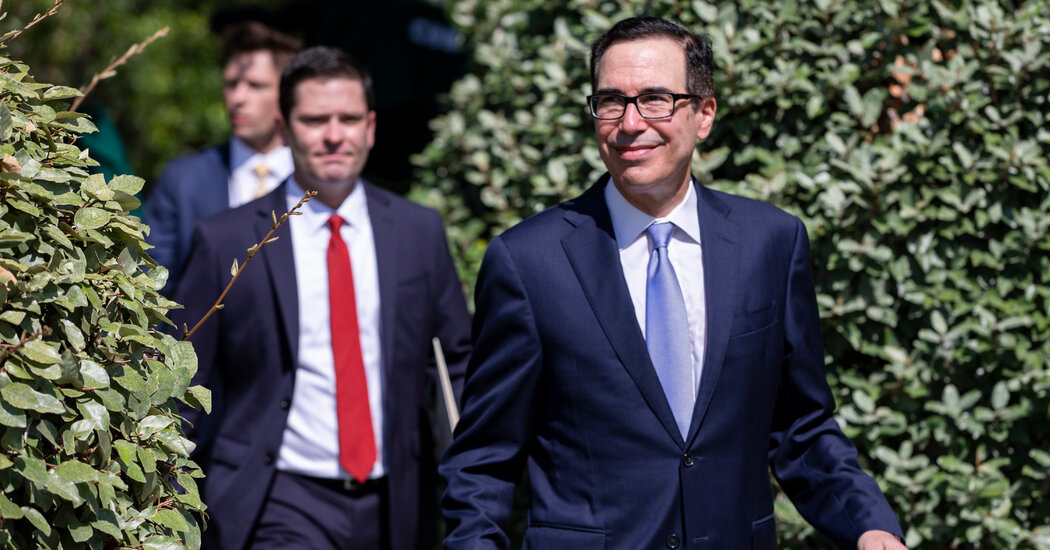 WASHINGTON — Treasury Secretary Steven Mnuchin on Friday called on Congress to work with the Trump administration to pass additional stimulus legislation by the end of the month as the resurgent coronavirus pandemic left the trajectory of the economic recovery uncertain.

The request comes as millions of Americans are about to see their expanded unemployment insurance benefits expire and as lawmakers embark on an intense week of negotiations over what would be the fourth significant bailout package since the virus shuttered large swaths of the United States economy earlier this year.

In prepared testimony before the House Committee on Small Business, Mr. Mnuchin said that the next round of money to support the economy should be targeted to help industries that have been hardest hit by the pandemic, as well as smaller businesses and low- to middle-income families. Mr. Mnuchin also said that the Paycheck Protection Program, which provides forgivable small business loans, should be extended but with a focus on helping the restaurant, hotel, travel and hospitality sectors.

“We are monitoring economic conditions closely,” Mr. Mnuchin said in his prepared remarks. “Certain industries, such as construction, are recovering quickly, while others, such as retail and travel, are facing longer-term impacts and will require additional relief.”

He added: “We are also sensitive to the fact that certain areas of the country are experiencing increased numbers of cases of the virus.” Cases are rising in 39 states, according to a New York Times database.

But while Mr. Mnuchin acknowledged more areas will need help, he continued to suggest a robust recovery was ahead — a far different view than many economists as predicting given a surge in new virus cases and renewed restrictions on business activity.

Mr. Mnuchin pointed to forecasts of strong economic growth in the third and fourth quarters of this year and a survey that showed a majority of small businesses have at least partly reopened.

“Recent improvements in unemployment insurance claims suggest that the job market has continued to strengthen in July,” Mr. Mnuchin said.

The House of Representatives passed a $3 trillion stimulus package in May that was a non-starter with Senate Republicans and the White House. Republicans have been discussing legislation that would cost $1 trillion to $2 trillion and provide liability protections for businesses that reopen during the pandemic and additional incentives for firms to rehire their workers.

White House officials have been debating how to structure another round of economic impact payments that would be sent directly to American taxpayers. They are also weighing whether to continue to provide an extra $600 per week to those without jobs, an enhanced unemployment benefit payment that many Republicans say is preventing people from going back to work.

President Trump has publicly called for a payroll tax cut and tax deductions for dining and entertainment expenses, but these proposals have received little support in Congress.

Senate Democrats on Thursday opened a new front in congressional negotiations over another round of aid to the faltering United States economy, proposing to repurpose money the Treasury Department has not yet spent from an economic rescue package passed earlier this year.

The Democrats’ proposal would spend a total of $350 billion on a variety of programs meant to help close racial wealth gaps and assist Black and other nonwhite Americans survive the Covid-19 recession, including more than $100 billion for health, child care and job-creation programs in communities of color. Their plans include a tax credit for renters and one to provide up to $15,000 per family for a down payment on a home.

The Treasury secretary was joined at the hearing by Jovita Carranza, the administrator of the Small Business Administration, whose agency has been responsible for deploying the $660 billion Paycheck Protection Program.

Both Mr. Mnuchin and Ms. Carranza are expected to face questions about where the money has gone and whether it is getting to businesses that need funds. Data released on loans over $150,000 showed that while much of the money has gone to restaurants, medical offices and car dealerships, Washington lobbying shops, high-priced law firms and special-interest groups also received big loans.