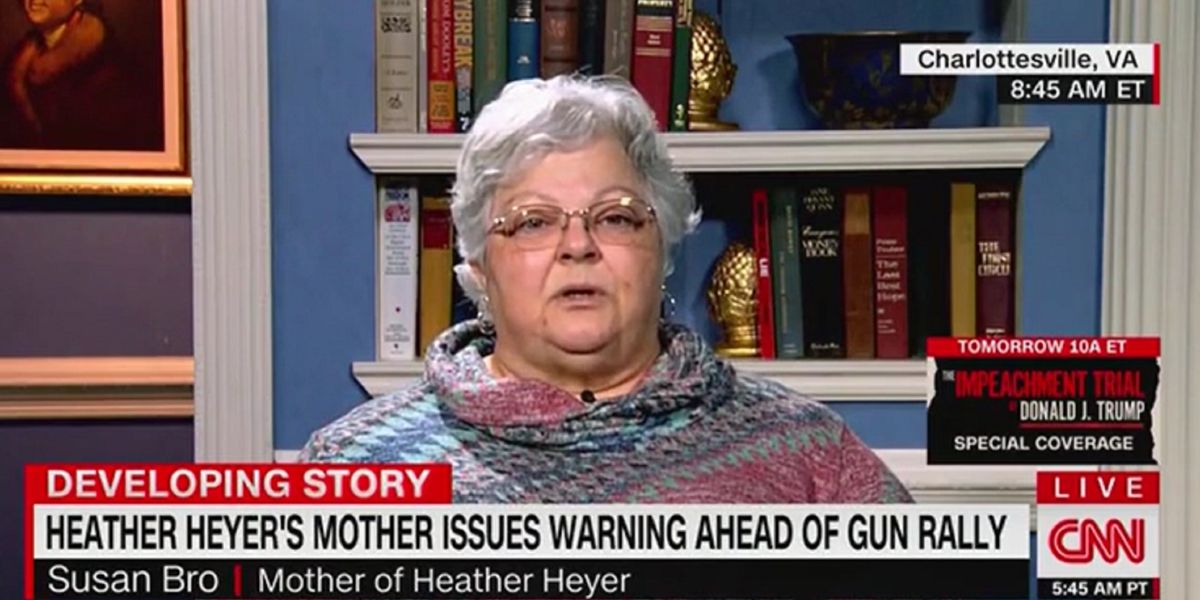 The mother of the woman killed at a demonstration in Charlottesville, Virginia, three years ago voiced her support for the peaceful pro-Second Amendment demonstrators who gathered at the commonwealth’s capital on Monday, saying that as a gun owner herself, she believes the Democrats’ list of proposed gun control measures is “a bit extreme.”

Susan Bro — whose daughter Heather Heyer was killed at the 2017 “United the Right” rally when James Fields Jr. drove his car into a group of protestors — called for anyone considering violence to stay home while saying those peacefully protesting the gun control measures had every right to be there.

“If you’re there to actually speak with representatives, have your voice heard, have calm conversations about what’s happening, by all means—be there.”

Bro went on to say that she did understand why Gov. Ralph Northam (D) restricted areas and banned people from carrying guns at Capitol Square days before the rally, saying, “as we know, it only takes one individual [at a protest] to create a disaster.”

But Bro also said she is a gun owner herself, and expressed her own concerns over the gun control laws being pushed by Virginia’s Democratic governor and Democrat-controlled legislature.

“I grew up around everybody owning guns. That was just a normal part of existence,” Bro told CNN. “Yes, I’m a gun owner. I believe in common sense gun measures, definitely, but not extreme measures,” she continued. “And I think that those need to be discussed. I think people need to be able to talk to their representatives.”

Bro accused President Donald Trump of “pushing politics” when he Tweeted last week, “Your 2nd Amendment is under very serious attack in the Great Commonwealth of Virginia. That’s what happens when you vote for Democrats, they will take your guns away. Republicans will win Virginia in 2020. Thank you Dems!”

“I’m talking about people who are gun owners who have been pushing others to really foam at the mouth about the laws in Virginia and what the Democrats might do even before the list came out,” Bro said. “I think the list is a bit extreme. There are some good common-sense gun laws, though, that are on that list. I hope sanity reigns today.”

The Washington Post reported Monday afternoon that there was “no violence” at the “massive pro-gun rally” held in Richmond.