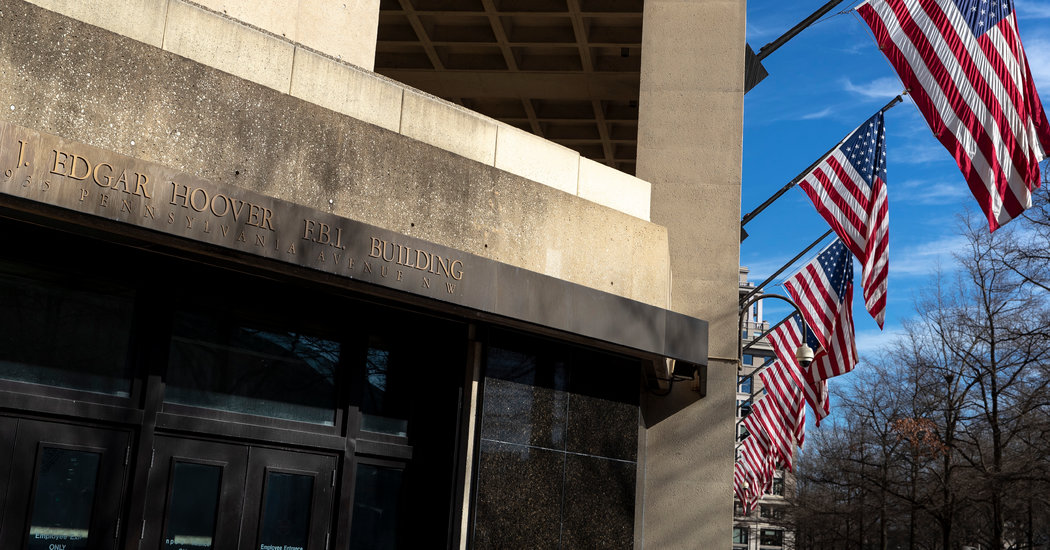 WASHINGTON — The number of people targeted for court-approved surveillance by counterterrorism and counterintelligence investigators in 2019 plunged to its lowest level in at least seven years, a drop that coincided with intense scrutiny on the F.B.I.’s use of its national-security wiretapping power in the Trump-Russia investigation.

There were 1,059 such targets of wiretap and search warrants under the Foreign Intelligence Surveillance Act, or FISA, in 2019, according to a newly declassified report released on Thursday by the Office of the Director of National Intelligence.

The number of such FISA targets had been on an upward trend during the previous six years, when investigators used FISA to eavesdrop on an average of more than 1,500 people each year — including 1,833 targets in 2018, the peak during that period.

The Office of the Director of National Intelligence began issuing a report of surveillance-related statistics annually after the 2013 leaks by the former National Security Agency contractor Edward Snowden set off a broad debate about electronic spying.

The report offers a window onto how the intelligence community uses its surveillance powers in ways that may affect the privacy of Americans — information that was once a closely guarded secret, but that the agencies have been trying to be more open about to build and maintain public trust.

The steep decline last year in the number of people targeted for eavesdropping in FISA court orders was among the most striking numbers in the latest report. The drop-off came as the F.B.I.’s use of FISA to wiretap Carter Page, a former Trump campaign adviser, came under scrutiny.

President Trump and his allies, including Republicans in Congress, have portrayed the wiretapping of Mr. Page under FISA from October 2016 until mid-2017 as part of a conspiracy by the F.B.I. to sabotage Mr. Trump for political reasons. An otherwise scathing report by the Justice Department’s independent inspector general did not corroborate that theory, but found numerous errors and omissions in the wiretap applications submitted to the FISA court.

Still, a top official cautioned against interpreting the decline in the number of suspects that the F.B.I. sought court permission to wiretap in national security investigations as “seemingly reflecting the events of the day.” The figure includes American targets anywhere in the world, as well as noncitizens on American soil like foreign diplomats.

The official, Benjamin T. Huebner, the chief civil liberties, privacy, and transparency officer at the Office of the Director of National Intelligence, suggested to reporters that fluctuations could be driven by a variety of factors, such as a “change in the terrorism threat” and world events.

He also noted that the number of FISA orders — as opposed to people targeted by those orders — has been on a steadier downward trend. (The F.B.I. can bundle requests to target more than one suspect into the same application for an order.)

A senior Justice Department official, speaking on condition of anonymity in the same briefing with reporters, echoed his points and said she had no information that the number of targets declined based on any “fear of using the FISA tool.”

Both also noted that the government’s use of its traditional FISA powers to obtain a court’s permission to wiretap particular targets has been on an overall downward trend since 2007 and 2008, when Congress adjusted the law to permit warrantless wiretapping of foreigners abroad. Before that, investigators also had to get individual warrants to collect emails from American companies, like Google and Yahoo, in the accounts of noncitizens abroad.

The number of foreign targets of such warrantless surveillance — sometimes known as Section 702, after the portion of the FISA Amendments Act of 2008 that authorizes it — has been on a continuous upward trend since at least 2013 and did not divert from it last year, when there were 204,968 such targets. In 2018, there had been 164,770 such targets.

One recurring dispute has been the government’s ability to read private emails to and from Americans gathered without a warrant because they were communicating with a foreigner abroad who was targeted in the 702 program. The report said that analysts queried the database with 9,126 search terms of Americans last year — a slight drop from 2018.

Since an early 2018 change by Congress, F.B.I. analysts working on an ordinary criminal investigation unrelated to foreign intelligence must obtain court permission before they may view a communication in the warrantless surveillance repository, if the message came up in response to a query about an American.

The report said there was one such instance in 2019. It also disclosed that an oversight review in 2019 had identified six such viewings in December 2018, even though last year’s report had said there were none in 2018. But the F.B.I. obtained no court orders granting permission to review the results of such a query either year, the data showed.

The report said the government had reported the unauthorized viewings to the FISA court as rules violations. Elizabeth Goitein, co-director of the Brennan Center for Justice’s Liberty and National Security Program at New York University Law School, spotted the disclosure “buried in the numbers” and posted about it on Twitter.

“Today’s statistical transparency report reveals, through the dry recitation of numbers, that the F.B.I. has violated this statutory warrant requirement in literally every case in which it has applied,” she wrote, arguing that the episodes underscored a need for greater restrictions on F.B.I. surveillance powers.

An F.B.I. spokeswoman, Kelsey Pietranton, said the episodes amounted to “growing pains” resulting from the new requirement and that they prompted the bureau to modify its systems and include the new rule in training. She also said none of the intercepted communications returned by the query “produced any information that was relevant to the criminal investigation.”

The N.S.A. also disseminated 4,297 intelligence reports that had information about American citizens, permanent residents and organizations like corporations drawn from the warrantless wiretapping program, including 1,562 reports where that identity was openly included rather than hidden from the view of other officials who read it, the report said.

Another recurring controversy has centered on when the intelligence community can unmask an American’s identity in an intelligence report. The standard practice is to conceal it for privacy protection reasons, but the rules permit unmasking the identity if it is necessary to understand the intelligence.