An NBC reporter generated widespread outrage on social media Sunday for characterizing the pro-gun rally slated for Monday in Richmond, Virginia, as a “white nationalist rally.”

“Reporters covering tomorrow’s white nationalist rally in Virginia, I’m absolutely begging you: Verify information before you send it out tomorrow, even if it’s a very sensational rumor you heard from a cop. Don’t become a hero in neo-Nazi propaganda circles with made-up stuff,” NBC reporter Ben Collins wrote on Twitter. 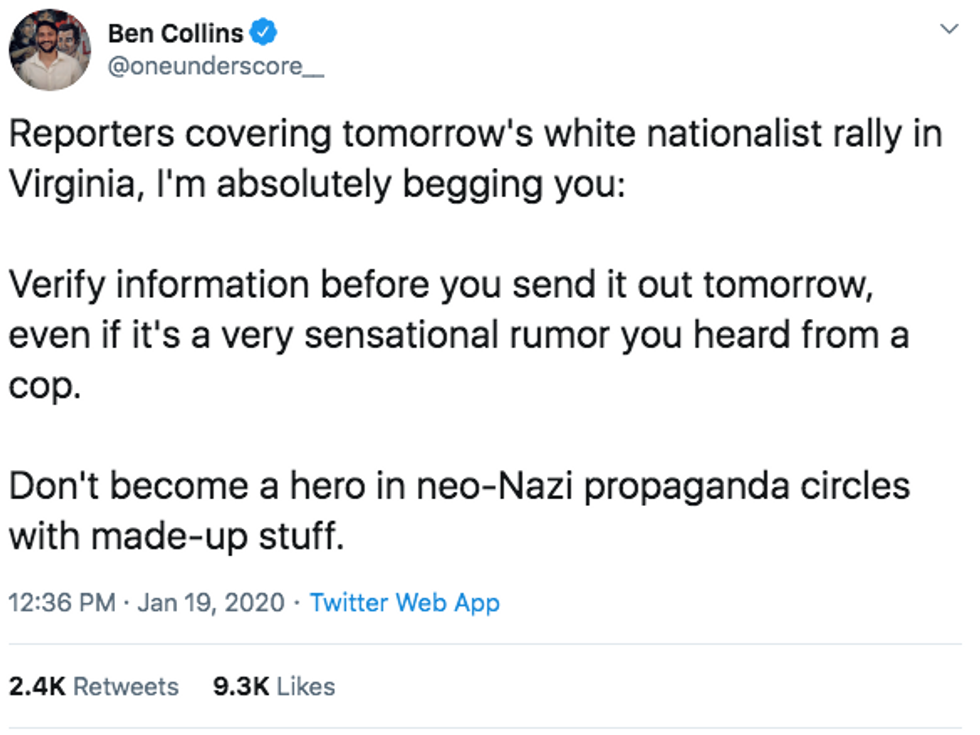 In response, Collins was accused of breaking the very rule of journalism that he urged reporters covering the demonstrations to follow.

“Tomorrow isn’t a ‘white nationalist rally’ but you’re here to tell those of us who will actually be covering it to be careful about accuracy? Are you joking?” Stephen Gutowski, a firearms policy reporter at the Washington Free Beacon, replied.

In a follow up message, Gutowski added,” Tomorrow’s event is in no way a ‘white nationalist rally.’ it is not organized by racists and they won’t be in any way a significant portion of the attendees yet this writer is elevating them while smearing the regular people who will actually be there.”

“Speaking of propaganda and made-up stuff, Lobby Day isn’t a “white nationalist rally,” but an annual event for Virginians to lobby lawmakers. Is this the type of coverage we should expect from @NBCNews?” Cam Edwards, editor of Bearing Arms, responded.

“Does this white nationalist apply to my black friends going tomorrow who believe in their 2A right? I’ll wait,” another critic responded.

“The irony of big brain over here “begging” people not to spread disinformation while also mislabeling a pro-Second Amendment demonstration as a “white nationalist rally” has been lost on no one, correct?” another person responded.

“Someone should tell my Jewish, Black, and Hispanic friends on their way to VA for Lobby Day that this guy considers them white nationalists,” another person responded.

Even Virginia state Rep. Emily Brewer (R) responded to Collins, writing, “This is a peaceful yearly lobby day/rally. The media attention has frenzied a small group outside the Commonwealth to take the narrative of what is traditionally a normal day at the Capitol. Facts matter, and I don’t appreciate you besmirching my law abiding constituents.”