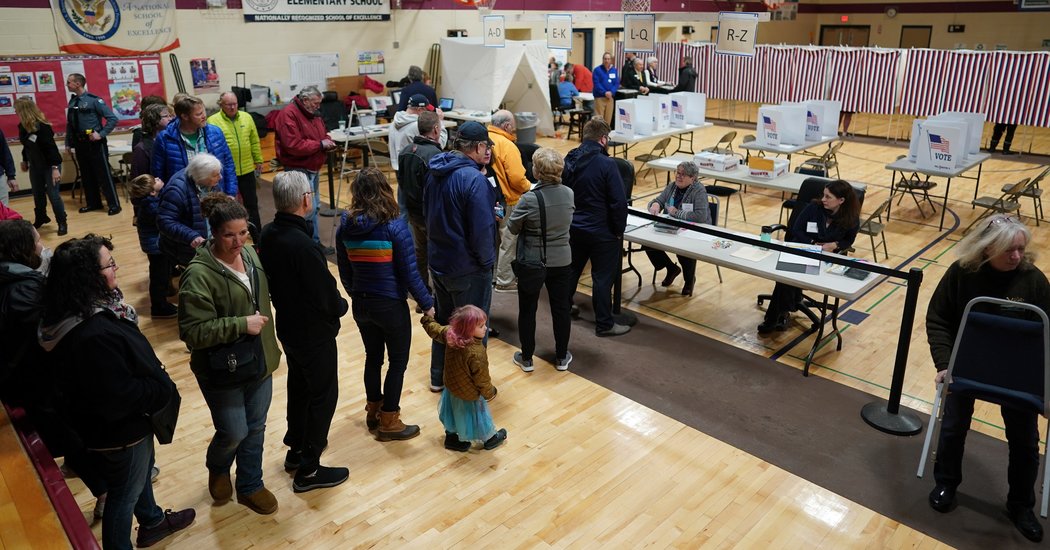 In Iowa last week, Democrats looking anxiously for a surge in caucus turnout — higher, some expected, than the record set in 2008 — were dismayed when the numbers barely even exceeded the much lower bar set in 2016.

New Hampshire gave them better news. But it still wasn’t really what they were hoping for.

The final precinct in New Hampshire reported its results Wednesday, bringing the total count of Democratic ballots to 296,622. That is substantially higher than in 2016, when turnout was 250,983. But taking into account the state’s growing voting-age population, it was pretty much on par with the turnout in the past two cycles in which only one party had a competitive primary — a more apt comparison.

Those cycles were 2012 (when Republicans had a competitive primary but Democrats had an incumbent) and 2004 (vice versa). Dante Scala, a political scientist at the University of New Hampshire, calculated before the primary that if turnout rates were similar this time, Democrats could expect 295,000 to 300,000 voters to turn out.

The final number was right in that range. “Not blockbuster, not below average, but just about normal,” Dr. Scala said.

Some Democrats have cited an exciting-sounding statistic: Turnout broke the record set in 2008, when 287,542 people voted in the Democratic primary. This is noteworthy, but it is mostly attributable to the fact that there are more eligible voters in New Hampshire now than in 2008. The percentage of eligible voters who participated did not change much.

This did not mean that breaking the 2008 record was insignificant — “a lot of people did come out to vote,” said Mia Costa, a political scientist at Dartmouth who studies electoral participation, “and there was a possibility that that wasn’t going to be the case, because that’s not what we saw in the last primary here” — but the numbers did not indicate unusual enthusiasm among Democrats.

The most interesting signals can be found in the demographic breakdown of the electorate.

Senator Bernie Sanders of Vermont, who won the primary by about 3,900 votes over former Mayor Pete Buttigieg of South Bend, Ind., was buoyed by very strong support among young voters. Exit polls show that Mr. Sanders overwhelmingly won voters under 40, while voters over 40 were split between Mr. Buttigieg and Senator Amy Klobuchar of Minnesota, and that dynamic might have been decisive, Dr. Costa said.

But the results do not appear to support one of Mr. Sanders’s biggest arguments for his “electability”: that he will bring a slew of first-time voters, formerly disaffected, into the fold.

That theory would call for turnout to be high over all, and especially high in the places Mr. Sanders did best. Dave Wasserman, an editor at the Cook Political Report, estimated on Wednesday that the largest increases in turnout, in comparison to 2016, had actually come in the places Mr. Buttigieg and Ms. Klobuchar did best.

Dr. Scala said: “One would think that if Sanders’s theory was right, turnout would be above the norm, and what I’m saying is it looks pretty normal to me. To hear Sanders tell it, there’s going to be this tidal wave of new voters. I don’t see it.”

Across the aisle, more than 150,000 voters — 151,602, to be precise — turned out for the Republican primary even though its outcome was never in doubt. That is extremely high for a noncompetitive primary. By comparison, about 54,000 people voted in the New Hampshire Democratic primary in 2012, and about 57,000 voted in the Republican primary in 2004.

Democrats, desperate to beat President Trump, have been trying to read the tea leaves of primary turnout for signs of a blue wave in November. But while trends in the primaries may be suggestive of trends in the general election, it is very difficult to draw reliable conclusions.

“I don’t think it would be inaccurate to say that this is a really important election for a lot of people, and people are going to be more fired up now than in other elections,” Dr. Costa said. “But it’s an unknowable question.”