The New York Times editorial board endorsed the two leading female candidates for the Democratic Party’s presidential nomination on Sunday, throwing its support behind Senator Amy Klobuchar of Minnesota and Senator Elizabeth Warren of Massachusetts.

The board’s decision to back not one but two candidates is a significant break with convention, one that it says is meant to address the “realist” and “radical” models being presented to voters by the 2020 Democratic field. While arguing that President Trump must be defeated, the board does not take a position on the best path forward for Democrats, writing that both approaches “warrant serious consideration.” (The editorial board is separate from the New York Times newsroom.)

The two female senators have released some of the most detailed policy plans of the candidates remaining in the primary campaign, prompting the board to praise each one as the “standard-bearer” for her wing of the party.

“There will be those dissatisfied that this page is not throwing its weight behind a single candidate, favoring centrists or progressives,” the board writes. “But it’s a fight the party itself has been itching to have” since Hillary Clinton’s defeat in 2016, “and one that should be played out in the public arena and in the privacy of the voting booth.”

It adds: “Ms. Klobuchar and Ms. Warren right now are the Democrats best equipped to lead that debate. May the best woman win.”

The 15 members of the editorial board spent more than a dozen hours meeting with nine candidates, releasing full transcripts of their interviews publicly. They took a more transparent approach to their process than ever before, describing their decision-making in a limited-run daily podcast and announcing their final choices on the Sunday episode of “The Weekly” on FX. 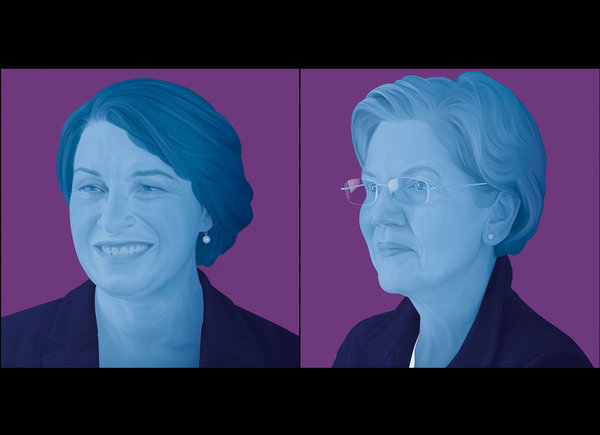 In 2020, both the radical and the realist models warrant serious consideration.

The editorial board argues that Ms. Warren has emerged as the strongest choice from the left wing of the Democratic Party, praising her “serious approach to policymaking,” her skill in explaining her ideas, her commitment to overhauling the structures of government and her experience leveraging the tools of the executive branch.

The board cites her work creating the Consumer Financial Protection Bureau, a regulatory agency started under President Barack Obama. Her failure to win over Republican support for her confirmation as head of the new organization led to her decision to mount her first Senate bid.

“Carrying out a progressive agenda through new laws will also be very hard for any Democratic president,” the board writes. “In her interview with the editorial board, she demonstrated her sophisticated understanding of the different levers of power in an administration.”

Still, the board worries that her path to the nomination is “challenging,” questions her political instincts and suggests that the country needs a “more unifying path” than her message blaming American business for a wide array of societal problems.

Of the more moderate candidates in the race, the board singles out Ms. Klobuchar, saying “the best chance to enact many progressive plans could be under a Klobuchar administration.” The editorial board casts her as an experienced, successful lawmaker with the ability to unite the party, while praising her plans to tackle climate change, housing policy, infrastructure, health care and childhood poverty.

[Sign up for our politics newsletter and join the conversation.]

“Her vision goes beyond the incremental,” they write. “Her lengthy tenure in the Senate and bipartisan credentials would make her a deal maker (a real one) and uniter for the wings of the party — and perhaps the nation.”

Yet the board questions her management ability, citing reports that she has mistreated some staff members in the past, and her ability to deliver a polished political message.

Nearly two weeks before voting for the Democratic nomination begins, the race remains extraordinarily fluid. Senator Bernie Sanders of Vermont and former Vice President Joseph R. Biden Jr. are grouped closely together in polls in Iowa and New Hampshire with Ms. Warren and former Mayor Pete Buttigieg of South Bend, Ind. Mr. Biden has held a consistent advantage in Nevada and South Carolina, the other states holding contests in February, according to polls.

Ms. Klobuchar, who has staked much of her campaign on success in Iowa, lags in polls in all of the early states. Her polling in Iowa has yet to show her reaching the 15 percent threshold for viability in the caucuses.

As they have for months, Mr. Biden and Mr. Sanders remain the overall front-runners for the Democratic nomination, holding a consistent lead in national polls while maintaining strong financial support and expansive, experienced operations.

[Which Democrats are leading the 2020 presidential race?]

The editorial board found fault with both men. Mr. Sanders’s policy prescriptions are described as “overly rigid, untested and divisive.” In an observation likely to anger his supporters, the board compared the Vermont senator to Mr. Trump at one point.

“Three years into the Trump administration, we see little advantage to exchanging one over-promising, divisive figure in Washington for another,” it writes.

Mr. Biden, meanwhile, is described as preferring “merely restoring the status quo,” with an agenda “that tinkers at the edges” and will not sufficiently advance the country, in the board’s view.

“What’s more, Mr. Biden is 77,” the board adds. “It is time for him to pass the torch to a new generation of political leaders.”

Of Mr. Buttigieg, the board writes, “His showing in the lead-up to the primaries predicts a bright political future; we look forward to him working his way up.”

Michael R. Bloomberg, the billionaire former mayor of New York City, declined to meet with the board, saying that he did not yet have positions on enough issues.

In the 2016 presidential primary race, the board endorsed Mrs. Clinton for the Democratic nomination and wrote that John Kasich, then the governor of Ohio, was “the only plausible choice for Republicans.”