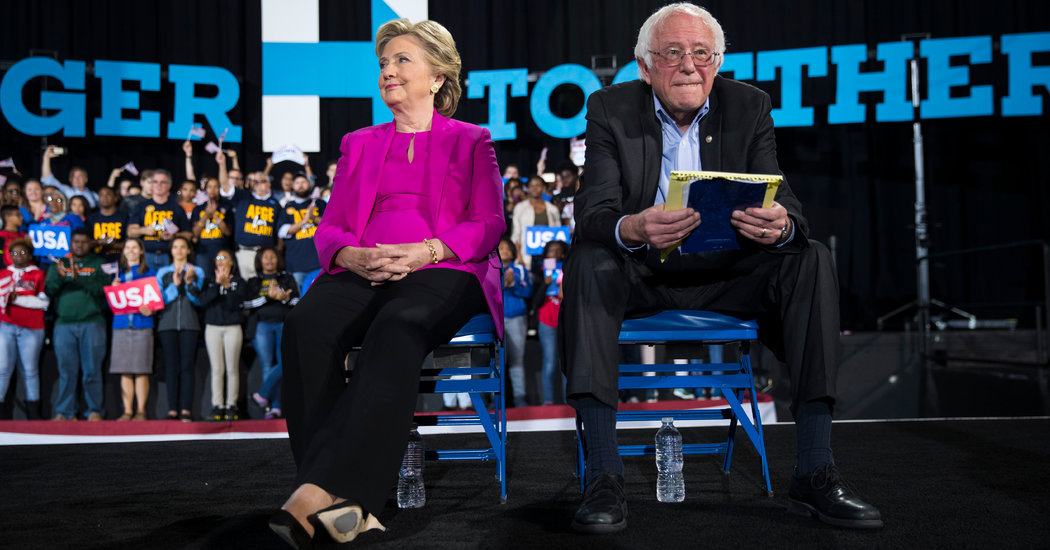 WASHINGTON — For three years, Hillary Clinton has watched the Democratic Party search for a path forward in the Trump era.

She’s watched as liberals and moderates clashed on how best to fight President Trump and a White House that was almost hers. She’s watched as some voters questioned the “electability” of the six women running for president, doubts that she once faced. She’s watched as Senator Bernie Sanders has risen, after his withering opposition to her in the 2016 presidential primary, to become the dominant liberal force in the 2020 race.

And she’d largely refrained from weighing in — until Tuesday morning, when The Hollywood Reporter published an interview with Mrs. Clinton promoting a new documentary about her that will premiere on Saturday at the Sundance Film Festival. In the documentary, she rips into Mr. Sanders and declines to say if she would endorse him and campaign on his behalf if he were to win the Democratic nomination.

“Nobody likes him, nobody wants to work with him, he got nothing done. He was a career politician,” she said. “It’s all just baloney and I feel so bad that people got sucked into it.” Asked by The Reporter recently if that assessment still held, she replied, “Yes, it does.”

Her remarks ricocheted across the Democratic Party on Tuesday, threatening to reopen the barely healed wounds of the 2016 primary, a race that quickly turned from a near-coronation of Mrs. Clinton as the party’s first female nominee into a bitter battle that exposed a deep ideological rift among Democrats.

That split over what direction the party should take is now a major issue in the current primary, with Mr. Sanders arguing for the full-throated leftist agenda and others counseling moderation. At the same time, he is engaged in a standoff with his liberal ally in the 2020 race, Senator Elizabeth Warren of Massachusetts, that has divided some on the left, over her accusation that he told her in 2018 that a woman could not win the presidency.

Mr. Sanders has denied that remark. Mrs. Clinton, for her part, seized on it and said it was “part of a pattern,” noting that he said in 2016 that Mrs. Clinton was unqualified to be president.

Some Democrats fear that Mrs. Clinton is adding fuel to the tensions within the party, whose leaders have spent years trying to overcome the lingering hostilities of the 2016 campaign, hoping to unify Democrats around the singular mission of defeating Mr. Trump.

“I just don’t think it’s appropriate for Democrats to be criticizing other Democrats, especially with personal attacks like that,” said Gilberto Hinojosa, the chairman of the Texas Democratic Party, who supported both of Mrs. Clinton’s primary bids. “I understand why there can be bitterness out there. I believe we just need to leave that behind us.”

Representatives of both Mr. Sanders and Mrs. Clinton moved quickly to try to quell the furor on Tuesday. Fresh off recent battles with not only Ms. Warren but also former Vice President Joseph R. Biden Jr., Mr. Sanders’s campaign was eager to avoid another fight that would distract from his closing message less than two weeks before the Iowa presidential caucuses. Mr. Sanders apologized on Monday to Mr. Biden after a Sanders campaign surrogate wrote an opinion article accusing the former vice president of having “a big corruption problem.”

Speaking to reporters on Tuesday in Washington, Mr. Sanders said: “Secretary Clinton is entitled to her point of view. My job today is to focus on the impeachment trial.”

When asked for his response to Mrs. Clinton’s assertion that no one liked him, he joked that “on a good day, my wife likes me, so let’s clear the air on that one.”

Mrs. Clinton tried to clarify her remarks on Tuesday evening. “I thought everyone wanted my authentic, unvarnished views!” she wrote on Twitter. “But to be serious, the number one priority for our country and world is retiring Trump, and, as I always have, I will do whatever I can to support our nominee.”

Those who have spoken to Mrs. Clinton recently confirm that she has every intention of supporting the Democratic nominee — even if Mr. Sanders ends up winning the primary. Still, even some longtime allies were shocked that she voiced such criticisms of Mr. Sanders in an election year, so close to the start of primary voting.

They were far less surprised by the content of her remarks.

Mr. Sanders’s denial in his dispute with Ms. Warren over whether he had told her a woman could not defeat Mr. Trump infuriated Mrs. Clinton, according to people close to her. Mr. Sanders’s subsequent refusal to chastise his supporters for attacking Ms. Warren and her team online only added to her concern.

“It’s not only him, it’s the culture around him. It’s his leadership team. It’s his prominent supporters. It’s his online Bernie Bros,” Mrs. Clinton told The Reporter. “It should be worrisome that he has permitted this culture — not only permitted, seems to really be very much supporting it.”

People close to Mrs. Clinton say she has grown worried that attacks from Mr. Sanders’s campaign could hurt the future Democratic nominee in much the same way that she believes they did lasting damage to her. She worries he will not drop out of the race even if it becomes clear he cannot win the nomination, a situation that could exacerbate divisions in the party.

Mrs. Clinton also does not believe Mr. Sanders could beat Mr. Trump, telling friends for months that he has never sustained harsh attacks from fellow Democrats on his record and self-described democratic socialism.

Since Mr. Sanders endorsed Mrs. Clinton in July 2016, the acrimony between the two camps has lingered. Mrs. Clinton and her former aides maintain that his endorsement came too late and was too lukewarm to truly unify the party. Some supporters of Mr. Sanders still argue that the Democratic National Committee “rigged” the rules to help her secure the nomination.

Unlike nearly all of the other two dozen Democratic candidates this primary cycle, Mr. Sanders did not call Mrs. Clinton before he entered the race.

Jane Kleeb, the Nebraska Democratic Party chairwoman, said that she understood Mrs. Clinton’s concerns but that voicing frustrations was unproductive for the party.

“She has obviously a very different vantage than any of us ever will. She worked her entire career and she was taken down by forces out of her control,” said Ms. Kleeb, who backed Mr. Sanders in the 2016 primary but recalled crying as she listened to Mrs. Clinton’s audiobook about her campaign. “I understand why she’s frustrated with Senator Sanders but I also think this is time to go after Trump.”

Though Mrs. Clinton’s presidential defeat still weighs heavily on her, friends say she is busy with a variety of other projects, traveling to accept awards and honorary degrees. An avid theatergoer, she attends Broadway shows and has been spotted at several concerts, including Fleetwood Mac, Earth Wind and Fire and Billy Joel. She spends a lot of time with her three grandchildren and, this fall, released a book profiling “gutsy women” with her daughter, Chelsea.

In December, she participated in a two-and-a-half-hour interview with the radio host Howard Stern, during which she argued that Mr. Sanders “hurt” her during the 2016 campaign.

Among some in Mr. Sanders’s campaign, there was hope that Mrs. Clinton’s remarks would lead to a bump in fund-raising.

On Twitter, the hashtag #ILikeBernie became a top trending topic. Many supporters pounced on Mrs. Clinton’s remarks, arguing that she remained out of touch with the working-class Americans who back Mr. Sanders.

“No apologies, no backing down, the scorn and hatred that all of official Washington D.C. and the Democratic Party has for him and his supporters is his closing case,” Will Menaker, a host of the progressive podcast Chapo Trap House, wrote on Twitter on Tuesday. “They are corrupt and evil, they hate him and they hate you because you are not.”

Though some of his supporters and staff members have been itching for confrontation, Mr. Sanders has rejected recent traps to get him to relitigate 2016. Last week, after Mr. Trump tried to goad Mr. Sanders by saying the Democratic Party was rigging the 2020 election against him again, he refused to bite and instead issued a statement attacking Mr. Trump.

Yet the furor over Mrs. Clinton’s remarks is unlikely to die down anytime soon, as she continues promoting the new documentary, “Hillary,” which is set to be released on Hulu a few days after Super Tuesday.

“She obviously has deeply held feelings about what happened in 2016 and is hellbent on stopping Sanders now,” said David Axelrod, who served as a top strategist on Barack Obama’s primary bid against Mrs. Clinton in 2008. “If the goal of Democrats is to win, I’m not sure that interventions like this are likely to help unify and mobilize all elements of the party in the fall. She, of all people, should know that.”