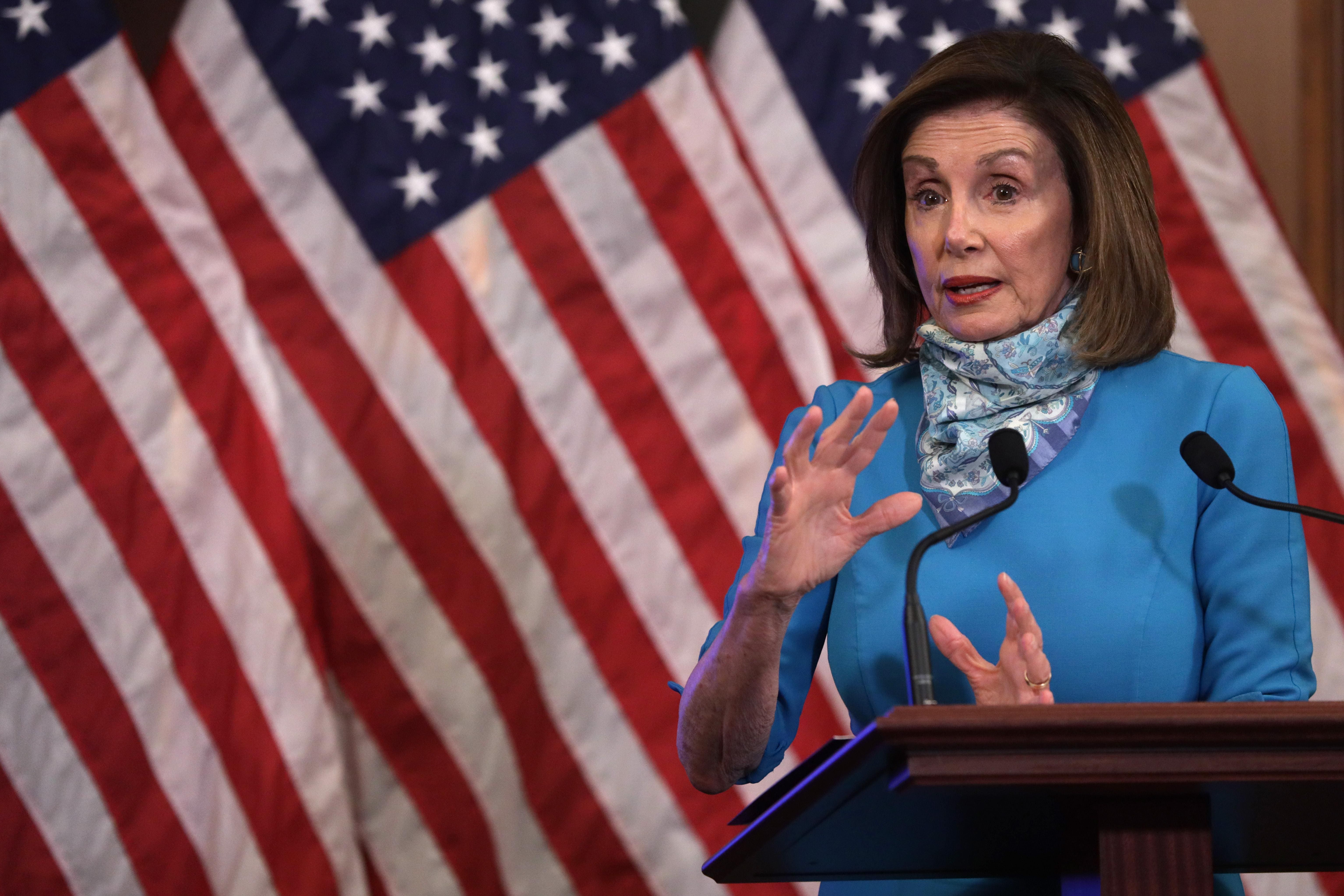 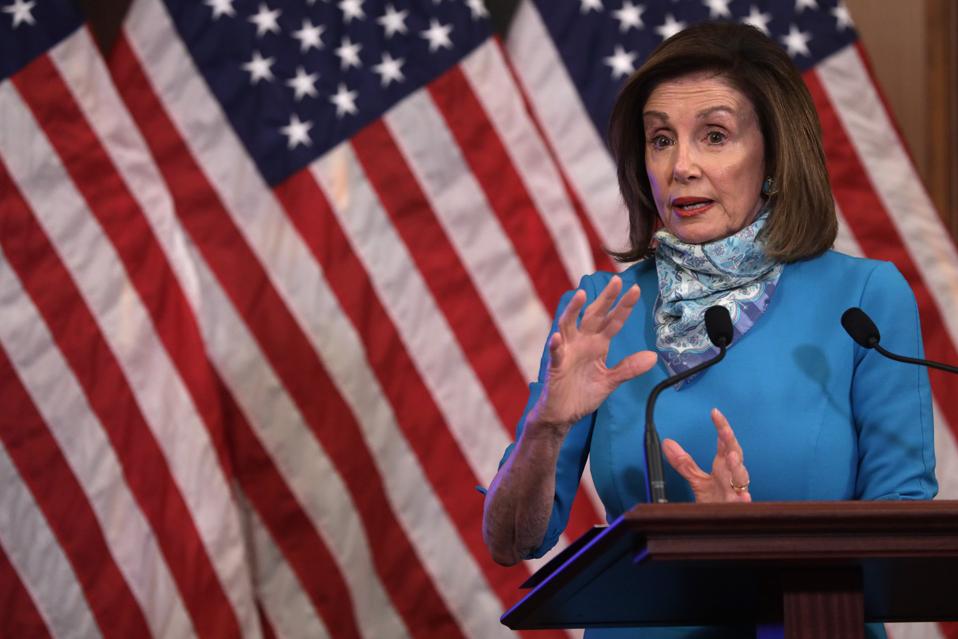 WASHINGTON, DC – MAY 07: U.S. Speaker of the House Rep. Nancy Pelosi (D-CA) speaks during a weekly … [+] news conference at the U.S. Capitol May 7, 2020 in Washington, DC. Speaker Pelosi spoke on the latest regarding the COVID-19 pandemic outbreak. (Photo by Alex Wong/Getty Images)

On Thursday, May 7th, Senator Charles Schumer (D-NY) said that he and Speaker Nancy Pelosi (D-CA) were going to unveil a stimulus package that was “Rooseveltian” in size – a callback to the programs, collectively known as The New Deal, ushered into existence by President Franklin D. Roosevelt.

Largely credited with the getting the United States out of the Great Depression, many of these programs exist even today. 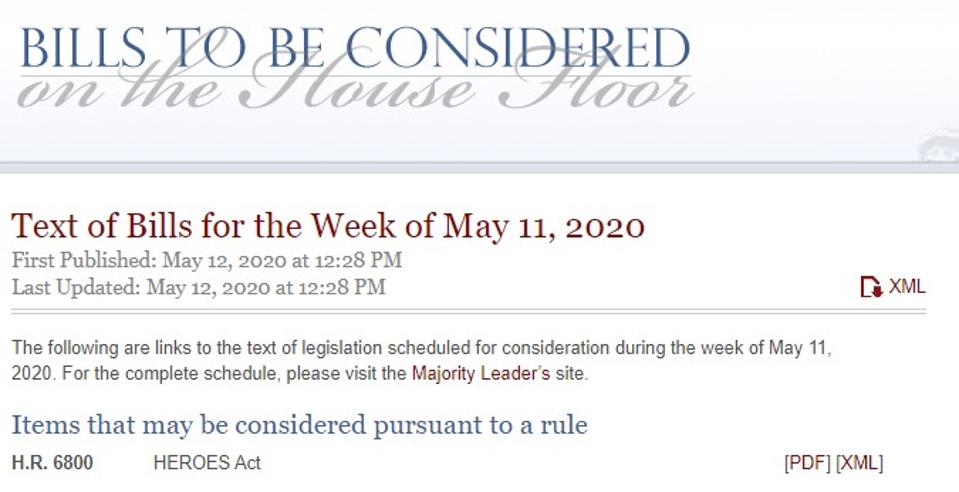 For the purposes of this article, we’re going to focus strictly on what the new stimulus check would look like. The HEROES Act would create a new recovery rebate similar to the one in the CARES Act, albeit a slightly larger check for those with dependents:

The income limits of this stimulus check match those of the first one:

Your stimulus check would be reduced by 5% of the amount above the lower limit. An individual with no children who earns $99,000 or more would not receive a check.

There have been a lot of other proposals by other legislators that would’ve included monthly checks but this one is a one time payment, similar to the CARES Act.

The mechanism for determining the payment and executing the payment matches that of the CARES Act. if you recall, the amount of your stimulus is determined by your 2019 tax return. If you didn’t file a 2019 yet, or didn’t have to, the bill would use your 2018 tax return information.

If you didn’t file either, but receive benefits from Social Security, the Railroad Retirement Board, or Veterans Affairs; the bill would use that information instead.

It’s unclear whether the IRS would use previously submitted information, such as to the Non-Filer’s portal, to determine how they would send out payments or if you would have to enter it again.

The bill also amends the CARES Act to fix certain oversights in the first bill – under the section titled “2020 recovery rebate improvements.” For example, if someone had a joint return in one spouse’s tax identification number (TIN) was not included, it stopped the check from going out.

The HEROES Act adjusts the language of the bill to reduce the benefit designed for just that person to $0. If the HEROES Act passes, joint filers with just one TIN would receive a $1,200 check from the CARES Act.

The HEROES Act would also:

If the HEROES Act passes in this form, it would increase the number of individuals eligible for a stimulus check. It would also increase the amounts of others, which would subsequently be disbursed.

The stimulus check is just a small part of the bill. Next, I want to highly a few other sections that have been ideas from other bills or floated by other legislators:

In a section titled “Protecting Renters and Homeowners from Evictions and Foreclosures,” the HEROES Act would put a moratorium on eviction filings for 12 months.

The protection would extend to repossessions as well, to cover any recreational or motor vehicles used as a dwelling.

A section titled Pandemic Premium Pay for Essential Workers is an idea first suggested by Senator Mitt Romney – to increase the pay of essential workers up to $12 an hour for the next three months.

The HEROES Act does him $1 better by increasing the premium pay to $13 an hour performed by an essential worker dating back to January 27th to 60 days after the COVID-19 Public Health Emergency.

The bill has several of these types of provisions to inject more stimulus into the economy and provide more support for those who need it.

To be clear, at this point this is just a proposal and a place to begin discussions.

While it’s not as massive as a monthly $2,000 payment, it’s likely more politically palatable but the bill contains a lot of other aspects that Republicans may not be amenable to. We will have to follow along to see how likely it is this bill passes in its current form.