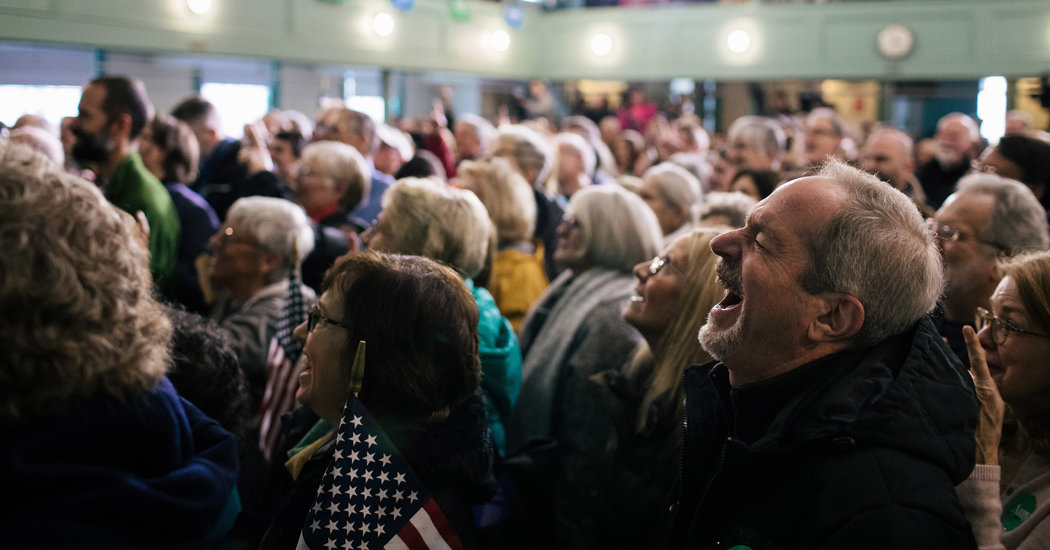 DERRY, N.H. — Throughout the nearly half century-long presidential rivalry between Iowa and New Hampshire, sometimes a state has to dig deep to make its case for why its contest is in fact superior.

As New Hampshire Democrats head to the polls Tuesday, they are divided over their candidates, the direction of their party and how to defeat President Trump. But there’s at least one core belief that unites them: That other first-in-the-nation contest really messed this one up.

“The very first real primary is going to be New Hampshire and rightfully so,” Howard Wooldridge said as he waited with a group of people hoping to get into a packed town hall event with former Mayor Pete Buttigieg. That other early state? “Nobody is going to get anything out of it.”

New Hampshire voters are known for their steely New England independence, an eagerness to buck whatever those Midwesterners do with their votes.

The first-in-the nation primary is the place that made Bill Clinton the “comeback kid” after a devastating defeat in the 1992 Iowa caucuses. Sixteen years later, Granite State voters helped his wife, Hillary, eke out a surprise victory against Barack Obama, reviving her campaign after being bested by the Illinois senator in Iowa. In 2016, the New Hampshire voters reversed course yet again, delivering a 22-point victory to Senator Bernie Sanders over Mrs. Clinton.

Yet, New Hampshire voters have never seen Iowa caucuses quite like these. How does a contrary New England Democrat stick it to Iowa, when there’s no one to stick it to?

The Iowa Democratic Party released results indicating that Mr. Buttigieg, the former mayor of South Bend, Ind., was the winner after it updated data from 55 precincts. But errors in the result tabulations have led several news organizations, including The New York Times, to refrain from calling the race. Mr. Sanders, who won the popular vote in the state, and Mr. Buttigieg are calling for a partial recanvass of some precincts.

In the midst of the mess, the two men swaggered across New Hampshire talking about an Iowa win, each telling voters he has emerged as a clear front-runner from the contest.

Senator Amy Klobuchar’s Iowa-bashing was subtle — or, perhaps, more politic — than that of New Hampshire voters themselves.

“You’re a state that’s a primary, so people can vote,” Ms. Klobuchar, who is from Minnesota, told a laughing crowd in Keene on Monday. “You know how to count votes.”

As she sat in a concert hall, waiting for Senator Elizabeth Warren to address voters in Derry, Mary Bishop, 71, said she was totally stuck on picking a candidate. But she was certain that the mess in Iowa would play no role in her decision making.

“Good lord, no,” she said. “They’re in another country. You need a passport to go from Iowa to New Hampshire.”

The fact that both states would be voting in the same presidential election — the very reason a Granite Stater would pay attention to Iowa in the first place — did not seem to interfere with the trash talk.

Ms. Bishop’s friend Sue Dickinson agreed, questioning how you could trust any results out of such a chaotic process. Yet, she also wondered whether she might just want to give Mr. Buttigieg — a candidate she previously dismissed as too inexperienced — a second look.

“When you get to the middle of the country, and that just might be my bias, but they seem very set in their ways. More traditional,” Ms. Dickinson said. “It surprised me that they’d consider him.”

In interviews with dozens of voters across the Granite State, it’s clear that Iowa is on their minds, even if they don’t like to admit that a state many are eager to disparage might influence their decision making.

The New Hampshire primary electorate tends to be a bit less ideologically liberal in Democratic races: More than 40 percent of New Hampshire voters are independent (officially called undeclared) — a significantly greater share than either party can claim — and independents are allowed to participate in either primary. With Mr. Trump facing little opposition, many are expected to flock to the more competitive Democratic primary race.

Dante J. Scala, professor of political science at the University of New Hampshire, says the idea of New Hampshire as a fiercely countervailing force is more political lore than fact, at least when it comes to Democratic primaries. In the 2000 and 2004 cycles, the state echoed the choices of Iowans, picking Al Gore and John Kerry.

One similarity: Like Iowans, New Hampshire voters decide late in the process. A month ago, polling showed that less than one-third of registered Democratic primary voters had “definitely” settled on a candidate.

The late-breaking nature of the electorate gives events in the final week before voting — like the Iowa caucuses or Friday night’s debate — significant influence to shift the race.

Michael Arnow, 66, said he had been considering Ms. Klobuchar but was leaning toward Mr. Buttigieg after seeing how well he performed amid the “craziness” of Iowa. As he waited to get into a packed town hall meeting with the former mayor on Thursday afternoon, he worried that Mr. Sanders could not defeat Mr. Trump — his main criterion for assessing the field.

“I don’t want to waste a vote for a politician that may not ultimately get to that point,” Mr. Arnow said. “I’m jumping on the bandwagon, admittedly.”

“Biden’s collapse here, Buttigieg’s rise has to do with Iowa,” said Mr. Scala, the author of a book on the history of the New Hampshire primary. “The Iowa thing really kind of threw everyone here into sixes and sevens, and people started shopping.”

That new reality visibly frustrates the famously voluble former vice president. At campaign events, he stresses that the Iowa results are unrepresentative of his ability to win bigger battleground states like Pennsylvania and Michigan.

“You ever been to a caucus?” he shot back at a student who asked Mr. Biden to explain what his disastrous finish in Iowa meant for his national prospects. “No, you haven’t. You’re a lying dog-faced pony soldier.”

Not all New Hampshire voters have the patience to wait for those later contests.

After listening to Mr. Buttigieg address a veterans hall in Derry, Dave Agennessey, 73, said he was torn between Mr. Biden and the former mayor. But after the caucuses, he’s leaning toward Mr. Buttigieg — despite, well, Iowa.

“The caucus system itself is flawed. It’s wrong,” said Mr. Agennessey, a semiretired Realtor. “If people do well, the winner will come out of New Hampshire.”

Mr. Scala says that New Hampshire voters might want to be a little more careful in their scathing reviews of their fellow early voters.

The caucus crisis has left many party leaders eager to restructure the early-voting process, with officials in places like Michigan and Illinois already salivating at an opportunity to jump ahead in the lineup.

“The thing is, once you open the box, where do the reforms end?” he said. “We’ve been joined at the hip with Iowa for so long in the process people are going to say it’s got to be a twofer. You’ve got to take out Iowa and New Hampshire.”