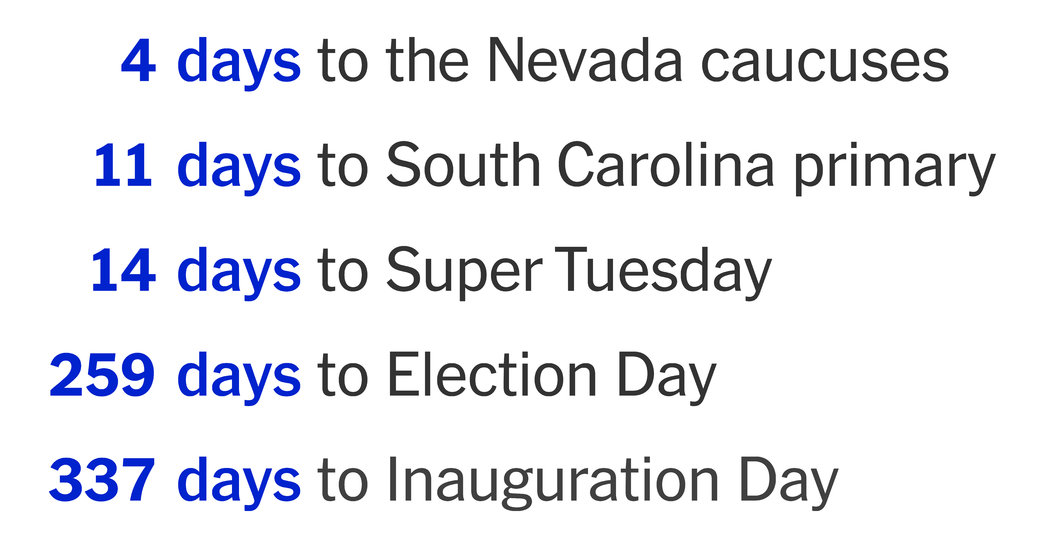 Warren speaking to Colden Aldrich, 6, and his sister Avery, 8, in the selfie line after an event in Reno, Nev., on Sunday.

Bloomberg can’t escape the tale of the tape. Will it hurt him?

Bloomberg is finding his reintroduction to national politics a bit bumpy after spending most of the last decade out of office. His long record of advancing policies and making remarks that angered many liberals is colliding with a newly emboldened activist culture in the Democratic Party that views people like him — centrist, compromising and often controversial — as the past.

The success of his presidential campaign rests in no small part on the hope that these people are not only wrong but are also such a small enough minority within the party that their opposition can be overcome. This is especially the case with the fraught issues of racial discrimination that Mr. Bloomberg has had to confront in recent days. Cornell Belcher, a strategist who worked for President Barack Obama and is now advising Bloomberg on African-American outreach, said that liberal skeptics of the former New York mayor would be wise not to assume his candidacy is a nonstarter with Democratic voters.

What is accepted as fact on social media and among political pundits, Belcher said, has proved to be wrong before.

“What happened in Virginia with the governor?” Belcher asked me in a recent interview, referring to Ralph Northam, whose medical school yearbook page was discovered with a picture showing one man in blackface and another in a Klansman’s robe.

It’s hard to be a Trump administration official in a Democratic town like Washington.

White House officials like Kirstjen Nielsen, the former secretary of homeland security, and Sarah Huckabee Sanders, the president’s former press secretary, have learned that lesson the hard way: Both were famously harangued or denied service when out at social engagements in the city.

When you’re an architect of the administration’s hard-line immigration policies and you’re trying to plan yourself a Washington wedding, things can clearly get a bit complicated.

That architect is Stephen Miller, and his bride, Katie Waldman, is a special assistant to the president. Miller has been known to have a rough go of it when he’s out in public; he once threw $80 worth of sushi in the trash after a protester loudly confronted him at a Washington eatery.

So their wedding — which took place at (where else?) President Trump’s hotel on Sunday — was an airtight affair. Invitations included a card with privacy requests, and the wedding registry was created under a fake name. Some invitees’ guests were screened.

Our White House reporter Katie Rogers was not on the invite list. But she did some good, old-fashioned reporting (and some combing of Instagram) and came away with a pretty clear picture of how the revelry went down.

The couple do go out, but they have been accosted in public before. So they’ve since learned to keep a low profile by tucking themselves into discreet restaurant corners and whatnot. The wedding was similarly low-profile — but that doesn’t mean it wasn’t a party. Miller is one of the president’s longest-serving aides, so it was not surprising that Trump swung by, fresh off taking a lap at the Daytona 500, to wish the new couple well. The reception looked a bit like a who’s who of characters in Trump World, from Sarah Sanders to Steven Mnuchin — with an Elvis Presley impersonator thrown in.