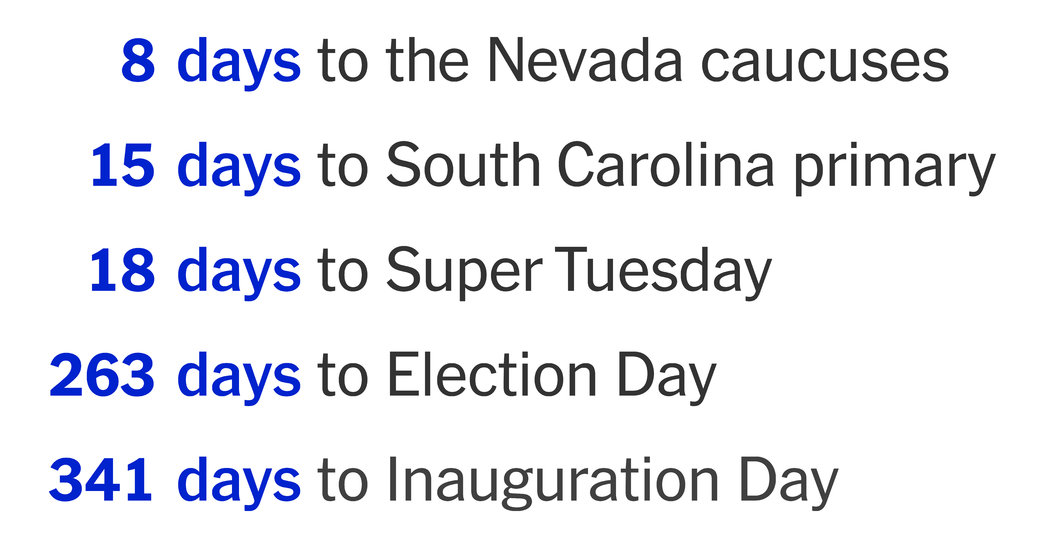 A young attendee got a better view at a town hall event for Elizabeth Warren in Arlington, Va., on Thursday evening.

Barr hits back at Trump

On Monday, Justice Department prosecutors recommended that a judge sentence Roger Stone — a longtime Trump ally — to seven to nine years in prison for his role in obstructing an investigation into the president.

Hours later, Trump tweeted his displeasure, calling it a “miscarriage of justice.” The next day, Attorney General William Barr ordered his team to lower its sentencing request.

The president then went on Twitter again, praising Barr’s decision. But all four of the lawyers prosecuting the case withdrew from it, and a public outcry followed. Many of the president’s detractors worried that after his acquittal on impeachment charges, it would be impossible to prevent him from meddling in cases that concerned his own alleged misconduct.

But on Thursday, Barr offered a rare rebuke to Trump during an interview with ABC News. “I cannot do my job here at the department with a constant background commentary that undercuts me,” he said.

Those comments represent some of the strongest pushback that Trump has received from a member of his cabinet during his administration. But they also might have been basically obligatory: Barr wasn’t exaggerating when he said his job was becoming impossible.

As our reporter Katie Benner notes, “Speaking up could have put Mr. Barr at risk of losing the backing of the president, but remaining silent would have permitted Mr. Trump to continue attacking law enforcement and all but invited open revolt among the some 115,000 employees of the Justice Department.”

Still, critics of the attorney general saw his comments mainly as a way to deflect responsibility for his role in carrying out the president’s political wishes.

Capitol Hill is back in action, sort of

Less than two weeks after the impeachment trial came to a close, Congress is back to business as usual. But as usual, that does not mean any laws are on their way to being passed.

The Senate on Thursday passed — if you can believe it — a piece of bipartisan legislation. The bill would require Trump to gain congressional authorization before he can take any further military action against Iran, in a rare assertion of Congress’s war-making powers.

It was passed largely on the strength of Democratic votes, but eight Republicans crossed the aisle to support it. Still, Trump is widely expected to veto the bill — which would force the Senate to muster a two-thirds majority to override him.

In the House, Democrats on Thursday passed a measure that would extend the deadline for ratifying the Equal Rights Amendment — a constitutional amendment that Congress first approved in 1972, but that did not win the support of enough states to become adopted.

The amendment still faces opposition from many Republicans, including Mitch McConnell, the Senate majority leader. And even Ruth Bader Ginsburg, the liberal Supreme Court justice who has long supported the E.R.A., said this week that she thought the amendment should be scrapped in favor of a new version.

“I’d like it to start over,” she said at a Georgetown University Law Center event on Monday. “There’s too much controversy about latecomers.”

Hello, Nevada caucusgoer. Can you spare $20?

Will Nevada’s caucuses devolve into an Iowa 2.0? That’s the big question as all eyes turn west for the Feb. 22 nominating contest. State Democratic officials are scrambling to assure everyone the process will unfold just fine. For months, Nevada planned to use the same app that helped cause the meltdown in Iowa, but officials scrapped that plan in favor of a new one that will rely on iPads and Google forms.

There are other only-in-Nevada quirks, too. In case of a tie at a caucus site, delegates will be decided by which campaign chooses the highest card from a deck.

So just where does the party get the money to pay for all these iPads? Well, donations, of course. And caucusgoers will be asked for a suggested $20 donation, according to a script being given to precinct leaders. But even though caucusgoers could choose not to put any cash in the envelope, a couple of precinct leaders told me that the mere fact they would be asking made them uncomfortable.