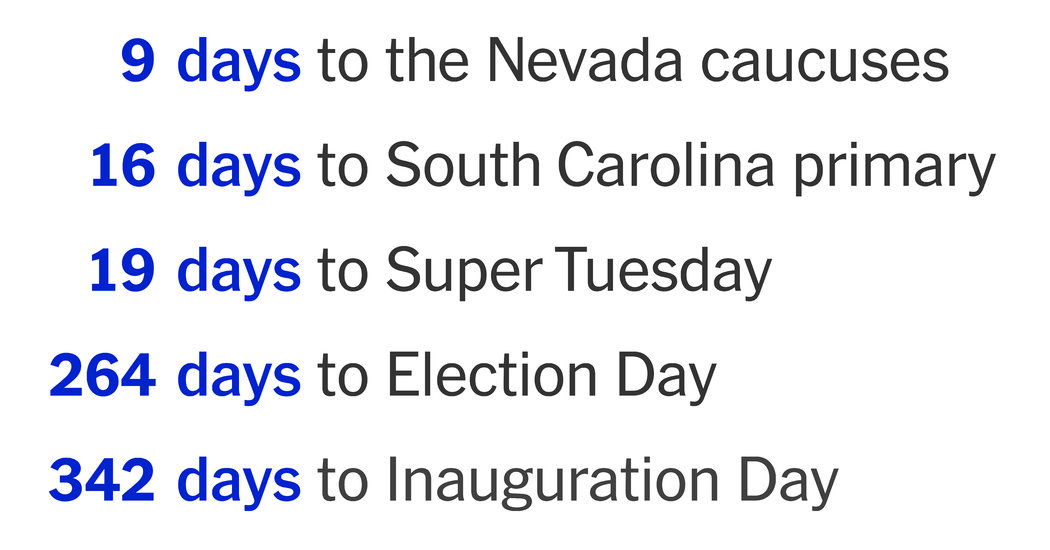 Late at night, journalists gathered at Klobuchar’s “Amy for America” primary night party in Concord, N.H., after her third-place finish in the state.

Buttigieg gets a hit of super PAC money

Buttigieg is receiving support from VoteVets, a super PAC supporting military veterans’ involvement in politics, and it bought on Wednesday over $500,000 worth of TV ads in Nevada.

Perhaps also notable: Unite the Country, the super PAC that supported Biden in Iowa and New Hampshire, doesn’t currently have any ad reservations.

To date, the three big super PACs involved in the Democratic race have spent close to $10 million. Unite the Country has shelled out $5.6 million on Biden’s behalf, VoteVets has spent $1.5 million for Buttigieg and Reason to Believe put forward $2.5 million for the now-departed Patrick.

Two candidates have no need for outside help: Tom Steyer and Bloomberg, both of whom have spent well over $100 million on ads. In Bloomberg’s case, the number is $350 million since the fall — roughly 10 times as much as any candidate who’s not self-funding.

One cohort that’s naturally excited about all of this: TV companies trying to sell ads. CNBC quoted a Wells Fargo analyst as saying, “His spending has caused a meaningful uptick in Q4 political revenue versus company plans.”

Bloomberg is also advertising heavily online, averaging about $1 million a day in Facebook ad purchases — outpacing even President Trump, whose 2020 web advertising operation is more robust than any other Democrat’s.

A day after Biden took a drubbing in New Hampshire, three key surrogates held a conference call with reporters to brush off the loss and sketch a path forward.

Mayor Eric Garcetti of Los Angeles, Representative Cedric Richmond of Louisiana and Symone D. Sanders, a senior Biden adviser, argued that their preferred candidate would perform well in the coming races in more diverse states, including Nevada, South Carolina and a number of the Super Tuesday contests. They warned against writing off Biden before people of color had the chance to vote in sizable numbers.

Yet Biden already faces substantial political and financial challenges, and growing competition for African-American voters even in South Carolina, a state once perceived as his firewall. After spending considerable time in Iowa and New Hampshire, only to finish fourth and fifth, respectively, he is now scrambling to regain momentum — and resources.

On the call, however, Richmond had some choice words for three of Biden’s competitors — Sanders, Buttigieg and Bloomberg: “When we get to the general election,” he said, “we cannot afford to take a chance with a self-defined socialist, a mayor of a very small city, a billionaire who all of a sudden is a Democrat.”

Fresh off her surprise finish in New Hampshire, Klobuchar jetted to Manhattan to raise money for her rapidly expanding campaign.

Klobuchar and her husband, John, spoke to about 150 people at a crowded Italian restaurant around dinner time, saying “we really shocked a lot of pundits,” and boasted of an expanded operation in Nevada that included some former staff members from Beto O’Rourke’s campaign.

She told the largely white crowd, members of which had paid at least $1,000 to be there, that the reason she began her primary night remarks by saying, “Hello, my name is Amy Klobuchar, and I will beat Donald Trump,” was that “I was well aware there were some people who had no idea who I was. Why not do it in a straightforward way?”

The fund-raiser, Klobuchar said, came on the same night as her wedding anniversary. So before she kicked off her standard stump speech, she regaled the crowd with her engagement story, which began with a dinner and a failed attempt to take a walk in the freezing Minnesota temperatures and ended with her husband proposing in the nonfiction aisle of a bookstore.

What’s going on with Trump and the Justice Department?

The attorney general, William Barr, intervened this week in the case against Roger Stone, a former Trump adviser, forcing the Justice Department lawyers prosecuting the case to request a lighter sentence than they had originally wanted to.

On Wednesday, Trump publicly signaled his support for Barr. Are we right back in the midst of a constitutional crisis, just a week after the president was acquitted in his impeachment trial?

Here’s our reporter Eileen Sullivan, writing from Washington on what this all means:

By late Wednesday, more and more Democrats called for congressional hearings and the resignation of Attorney General William P. Barr after the Justice Department changed its sentencing recommendation for President Trump’s longtime friend and adviser, Roger J. Stone Jr. But Mr. Trump did not cede an inch and said prosecutors — four of whom resigned from the case on Tuesday — owed Mr. Stone an apology.

Mr. Trump also said he had not ruled out a pardon for Mr. Stone and inexplicably accused Robert S. Mueller III of lying to Congress. Mr. Mueller was the special counsel who led the Russia investigation. Mr. Stone’s case stemmed from that investigation.

Mr. Barr is expected to testify before Congress during routine budget hearings in the coming weeks and will probably face questions about his involvement in changing Mr. Stone’s sentencing recommendation. But other than withholding funding for the department and calling for an inspector general investigation, Congress is limited in what it can do.