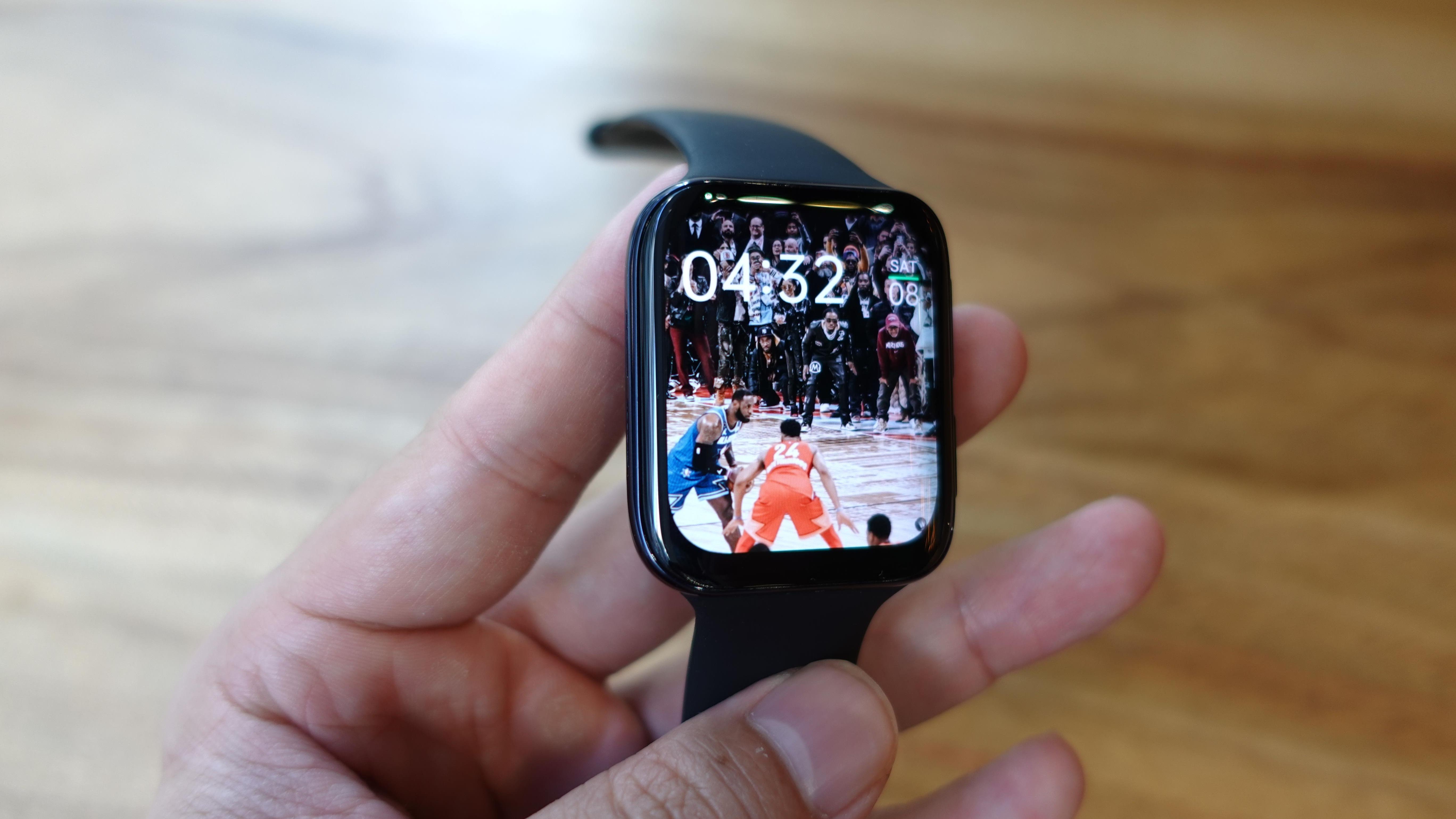 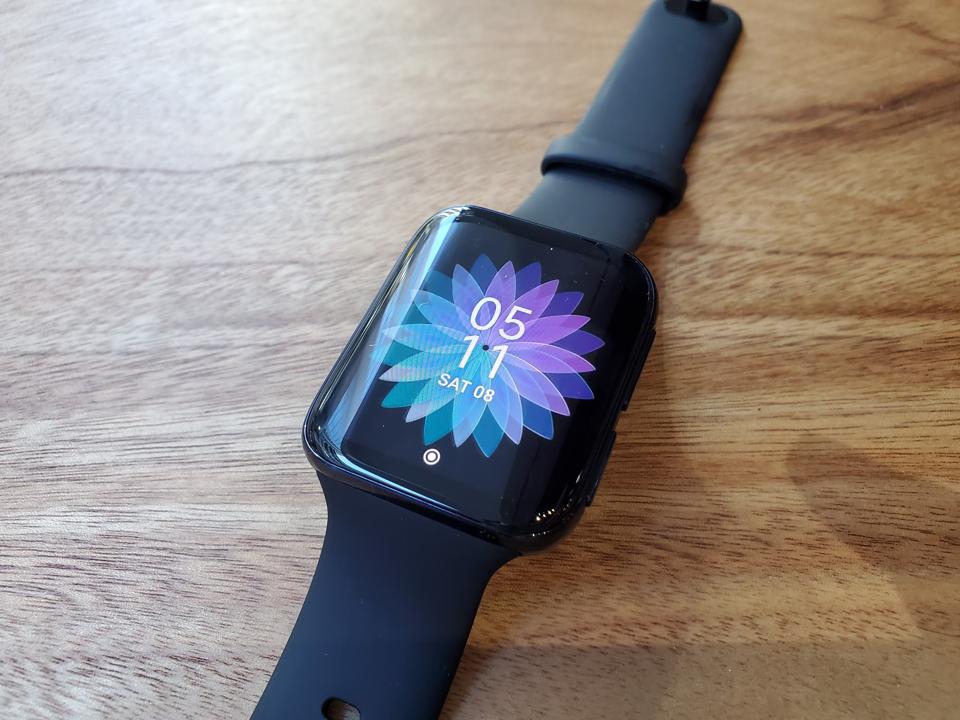 It is not possible to review Oppo’s debut smartwatch without addressing the elephant in the room, so we might as well get it out of the way in the first sentence—yes, the Oppo Watch’s design is very reminiscent of the Apple Watch, to the point that it would not be unfair to call it a clone or copycat.

But once you get over—if you can get over—the unoriginal design, the Oppo Watch is an excellent WearOS watch that may just be the best Android smartwatch right now. 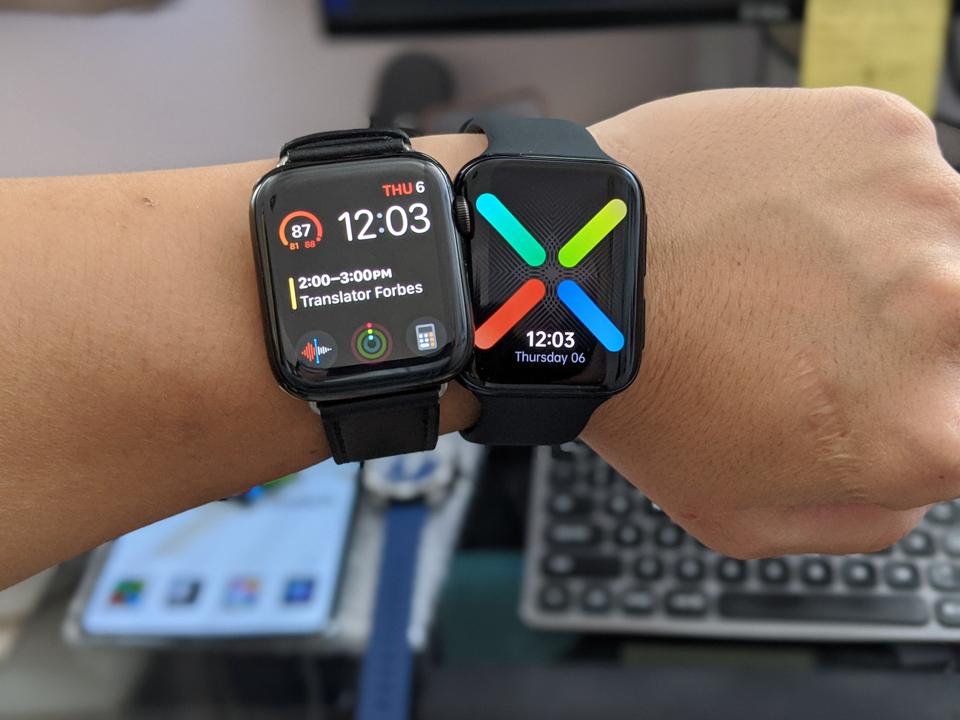 The Apple Watch (left) and the Oppo Watch (right).

I’m testing the larger 46mm international version of the Oppo Watch that will be launching soon in markets such as India, the U.K. and other parts of Asia and western Europe, and the screen is a stunner—perhaps better than Apple’s. It’s an OLED panel whose left and right sides curve (like a modern phone screen), making for an aesthetically pleasing visual effect and a more comfortable swiping surface. Despite its overall shape just 2mm larger than the 44mm Apple Watch 5, Oppo Watch actually has a bit more screen due to slimmer bezels: the canvas spans 1.9 inches diagonally.

More screen means more and larger information can be displayed, and the Oppo Watch takes advantage of this with some beautifully designed watch faces, including a customizable one that allows the user to use any photo they like. 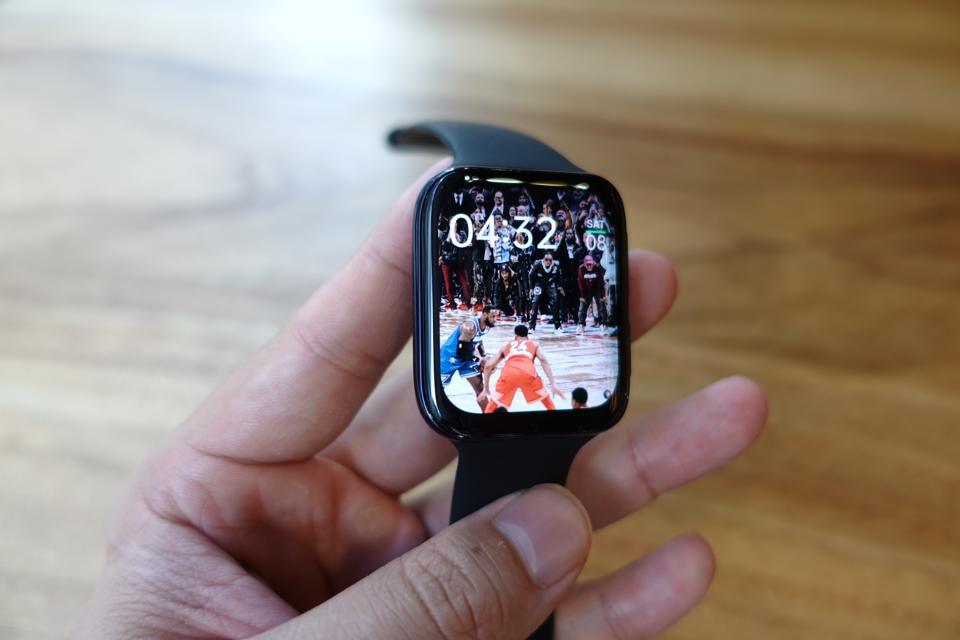 Users can add any picture they like to fill up an entire watch face.

The rest of the hardware is on point, but again—reminds heavily of the Apple Watch. There is a heart rate sensor on the back, there’s a speaker on the left side for phone calls and alerts, and two hardware buttons on the right. All that wrapped in a stainless steel frame. The included rubber straps can be removed with the press of a release mechanism. Overall construction feels premium. 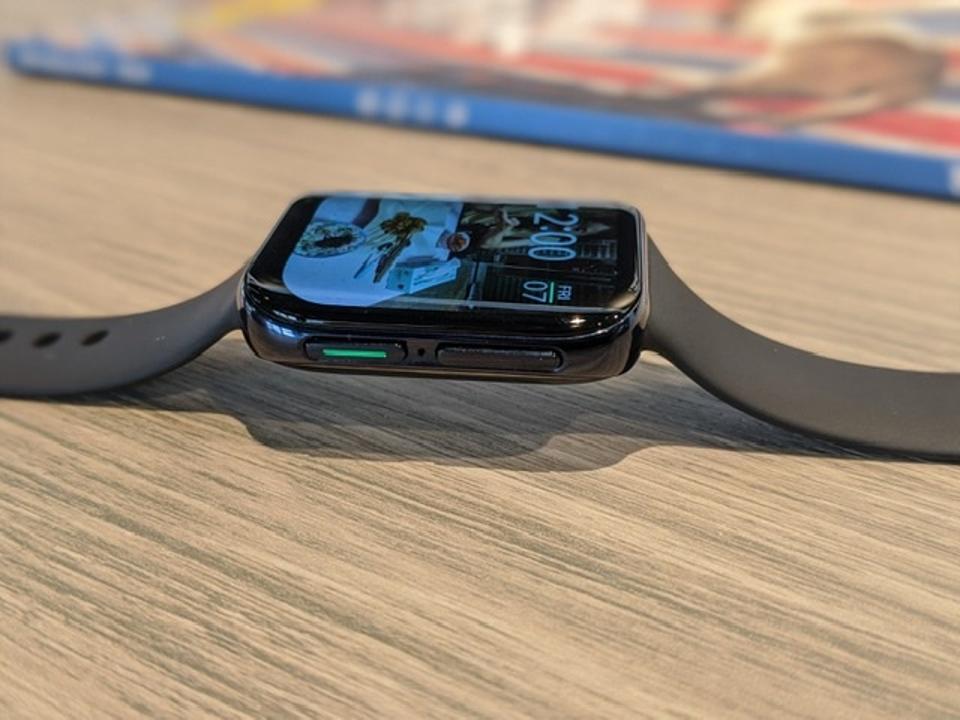 There are two buttons on the right side. 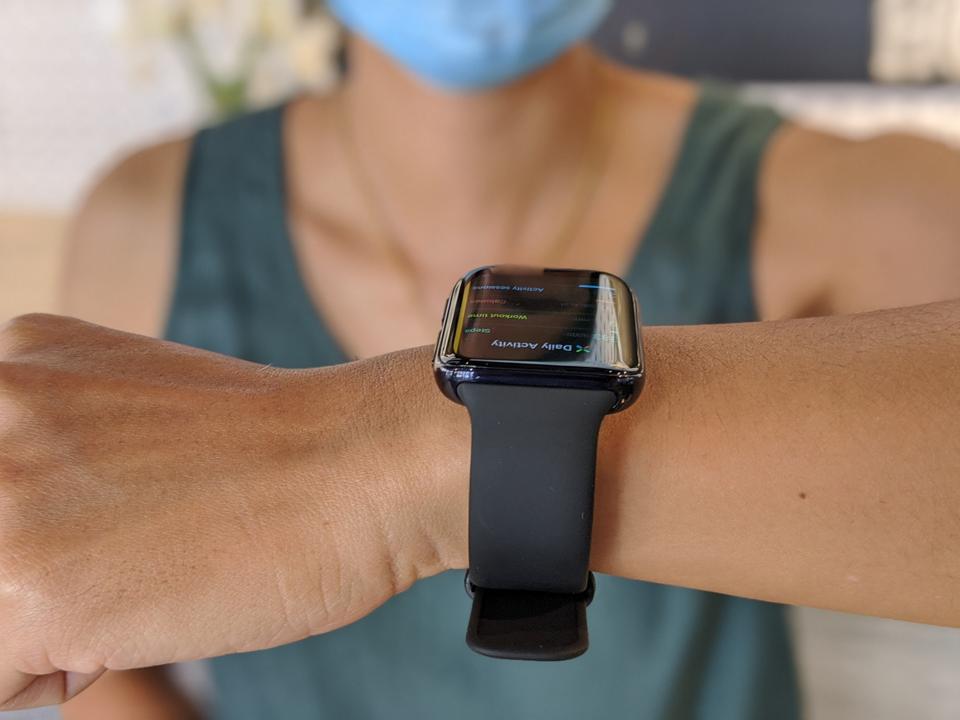 curved screen on the Oppo Watch. 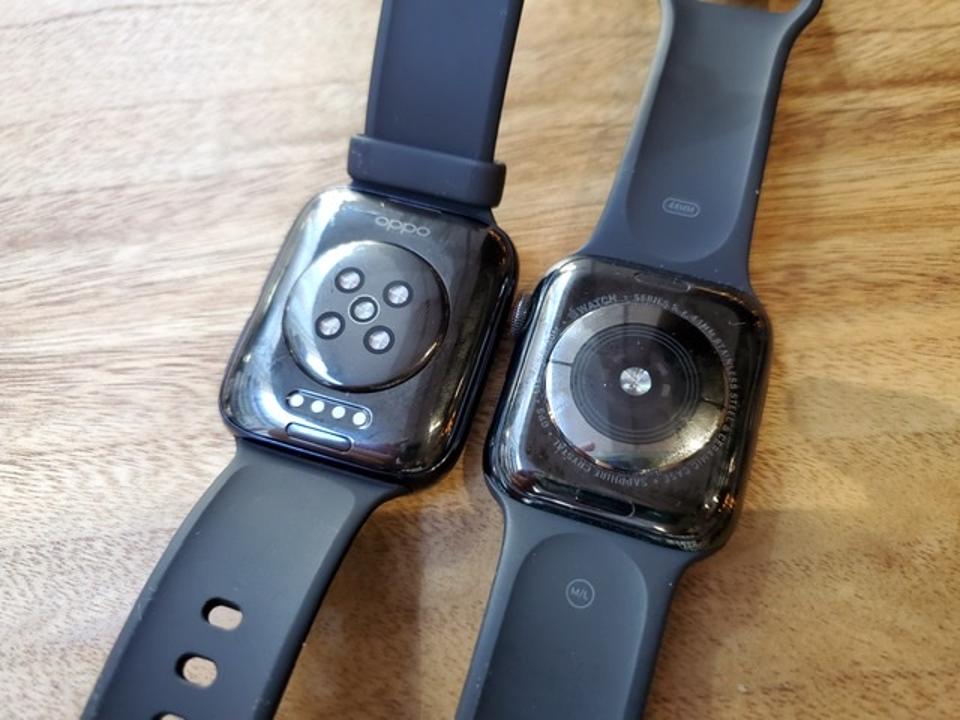 Google’s WearOS has long been mocked by tech media for being a slow, limited software. WearOS was so bad Samsung and Fitbit went and developed their own wearable software to avoid using it. But last year’s TicWatch Pro optimized the experience enough to make the experience enjoyable, and Oppo has taken another step here: the WearOS running on the Oppo Watch is actually good.

Syncing the watch for the first time is easy, once connected, the watch can receive and respond to notifications, as well as access Google’s suite of apps like Google Maps and Translate directly on the screen. Navigating through the software is done via a series of swipes and taps, and the occasional button presses. Animations move around smoothly without noticeable hiccups.

To me, the main reason to wear a smartwatch is to make us check our phones slightly less, and the Oppo Watch does that. I can skim through the first paragraph of a new email on my wrist and get an idea whether it requires an immediate response or not; I can also respond to WhatsApp messages via voice dictation or typing on a mini keyboard on the screen. Google Assistant works, too, with the press of a button (there is supposed to be a way to trigger it via voice command but it did not work for me).

… but not the best

But WearOS still falls short of Apple’s WatchOS. Although I said I can respond to messages via voice dictation or typing, neither experience work as well as on the Apple Watch. The latter can pick up entire 15-word sentences with seemingly 90-95% accuracy, whereas the Oppo Watch can pick up maybe eight words max, at about 80% accuracy. Typing on a keyboard stretched across a small wearable screen is also difficult, whereas Apple has a much better solution with its scribble feature (you just scribble alphabets on the screen one by one instead of pecking on a tiny keyboard).

Fitness tracking and other features

Back to the good news: the Oppo Watch’s fitness tracking is accurate. It can track steps, heart rate, and sleep, the latter of which Apple’s wearable can’t do yet. It’s also rated 5ATM so it can be taken for a swim.

Oppo has also designed this virtual fitness trainer mode, it’s essentially a video that plays on the watch of a personal trainer doing various exercises. The point is the user can watch and follow along. There are several programs to choose from, including “fat burner” for more intensive high-intensity exercises and morning stretches. The watch also tracks and shows your heart rate during the session, and provide voice prompts on when to rest and how many sets of exercises. 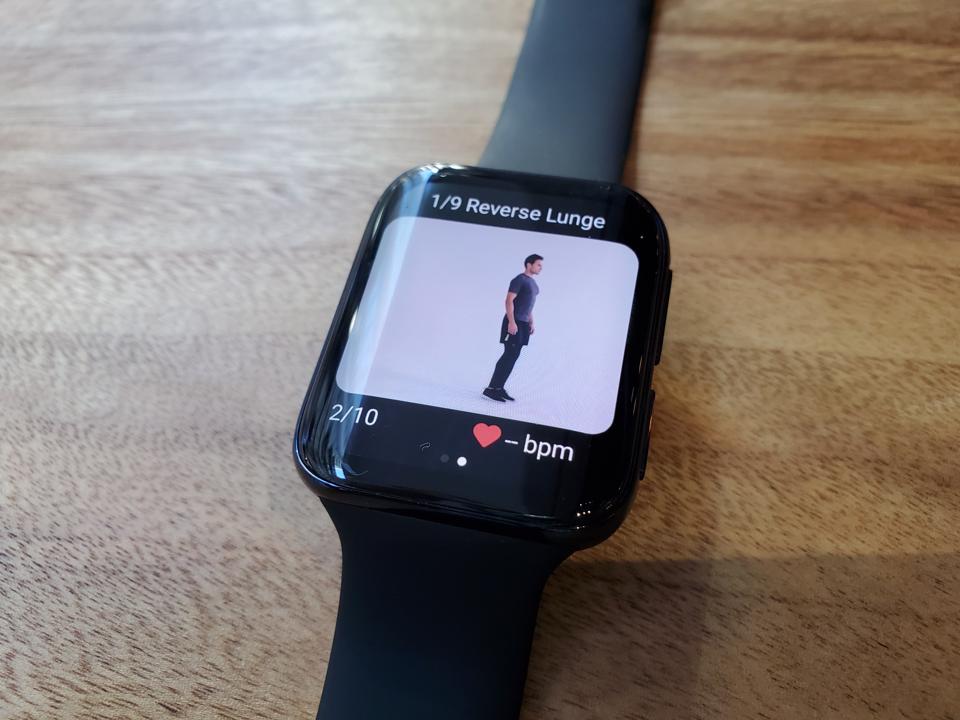 In terms of battery life, the Oppo Watch can last two days on a single charge if used to its full extent (meaning with notifications on and constantly using its smart features); there is a “battery saver mode” which only shows time and tracks heart rate and steps, and this lasts 21 days. It’s impressive that the watch can still track heart rate in this mode. Charging is done via a proprietary magnetic charger included in the box.

The Oppo Watch is overall an excellent wearable. It looks better/sleeker in my opinion than the Fitbit Versa 2, while keeping the same excellent fitness tracking; and it’s more capable than Huawei’s or Samsung’s 2019 offerings (caveat: I have not tested Samsung’s brand-new Galaxy Watch 3 yet). 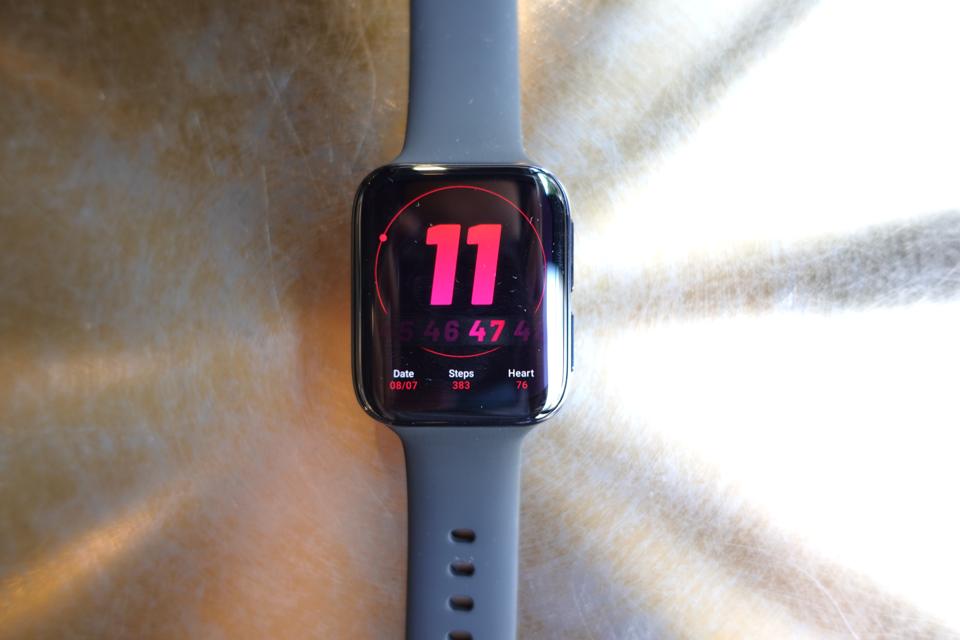 The Oppo Watch has a lot of interesting watch faces.

Pricing, however, is odd. In India, the 46mm Oppo Watch starts at around 20,000 rupees, which comes out to $267. But in the U.K., it starts at £329, which is $420. The U.K. version (much like the version hitting non-India markets in Asia) includes eSIM capabilities whereas the India version does not, but still, the price difference is jarring.

As someone who’s loved the Apple Watch, but is disappointed that it only works on iPhones, I’m glad there is now essentially an Android version of it.