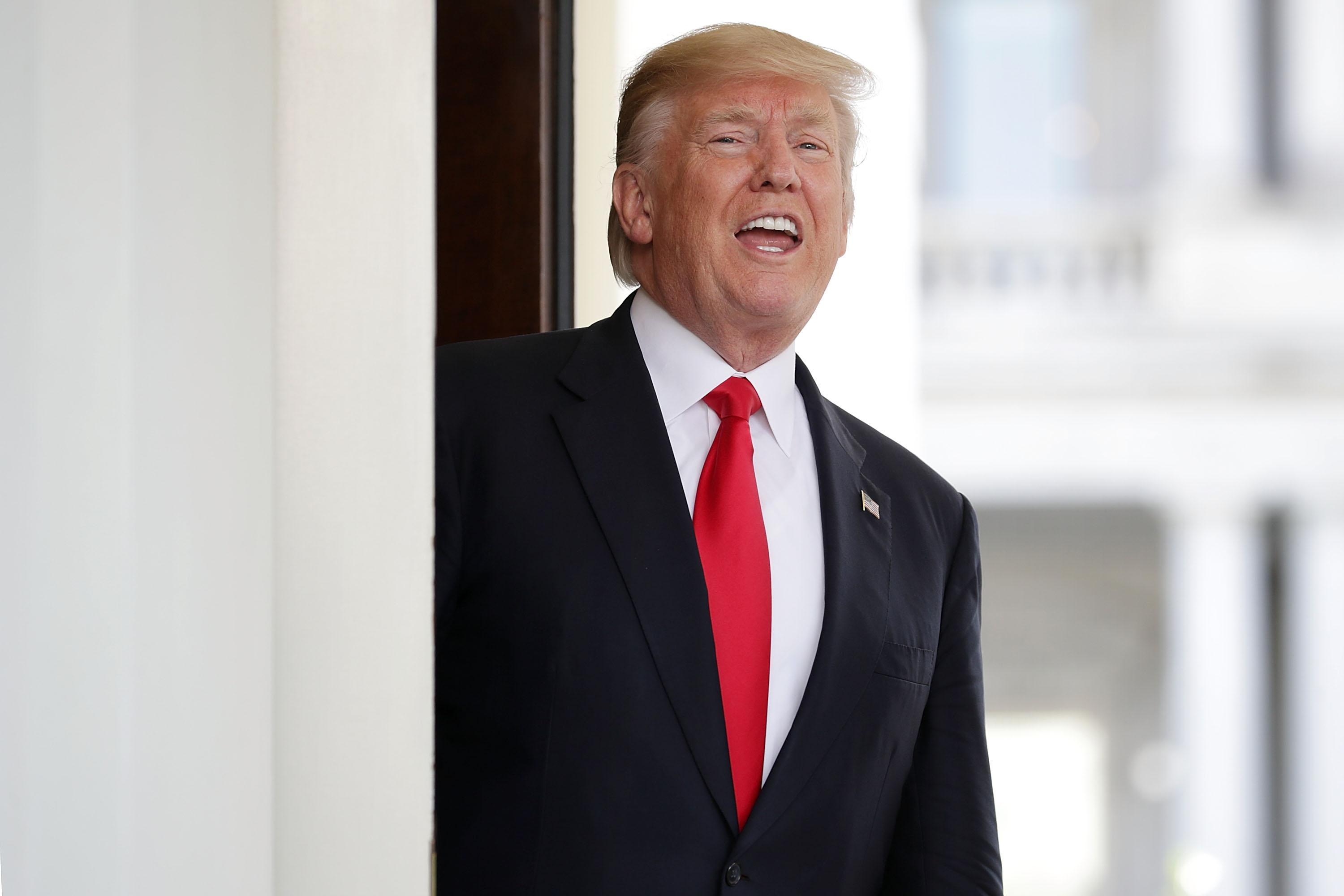 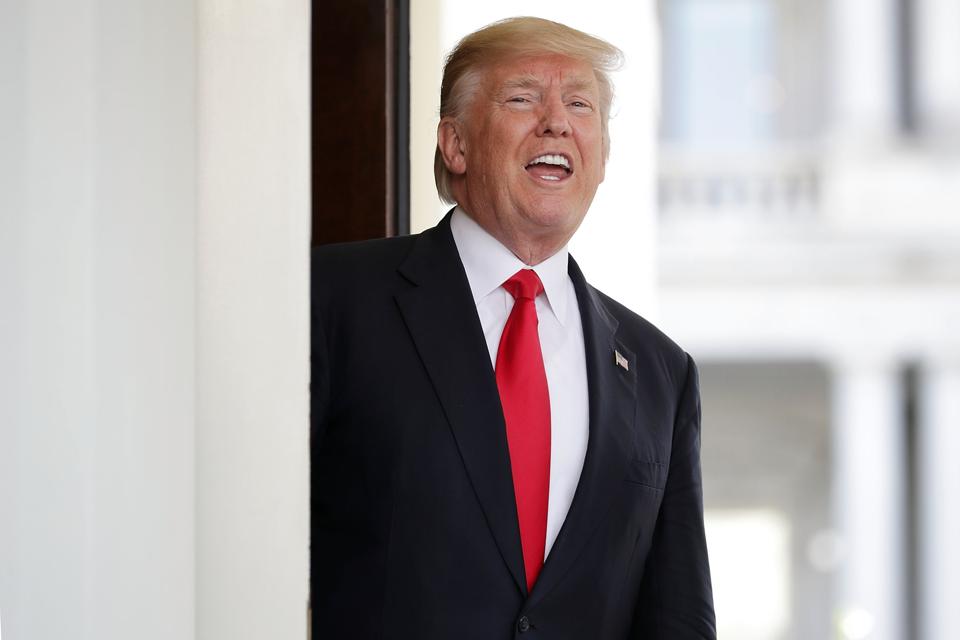 WASHINGTON, DC – MAY 31: U.S. President Donald Trump shouts answers to reporters after Vietnamese … [+] Prime Minister Nguyen Xuan Phuc left the White House following meetings May 31, 2017 in Washington, DC. According to Phuc, the U.S. and Vietnam are working on new trade agreements after the Trump Administration withdrew from the Trans-Pacific Partnership. (Photo by Chip Somodevilla/Getty Images)

“I hope you don’t mind that I’m eating: I haven’t eaten all day,” says Parler founder John Matze, devouring a late lunch. His social media app—a new favorite of President Trump’s and other GOP leaders—has been under siege for the past few hours. “I’m sitting here like, banning trolls.”

By trolls he means teenage leftists who’ve flooded onto Parler after the Trump campaign publicly declared on Wednesday that it might decamp from Facebook and Twitter and refocus its efforts through Parler. Matze knows the leftists’ ages of the trolls, as he calls them, because some verified their accounts, coughing up selfies and driver’s licenses or passports (a set of highly unusual requirements for proving identity and registering for an online account). They’re comment-raiding Parler posts—swamping them with messages that make it unpleasant for the app’s conservative users to post and interact with each other. “They’re trying to get people to have a bad experience and leave,” he says. “We’ve got a big army of volunteers to help take care of this. It’s going to be handled within 48 hours.”

Parler—as in, a parlor room where a chat might happen—is a two-year-old app dedicated, Matze says, to the promulgation of free speech: “The best thing is for everyone to engage with a bad idea and shut it down through public discourse.” Right now, Parler is hosting a very one-sided conversation. It is almost entirely made up of Republican leaders, officials, thinkers and publications. (Liberals account for a “very minute share of the population,” Matze says.) The Trump campaign, of course, is on Parler. Likewise, Trump’s son Eric, his lawyer, Rudy Giuliani, and his campaign manager, Brad Parscale. Alongside them: senators Rand Paul and Ted Cruz, the National Rifle Association and The Washington Times. Listening to what they say are 1.7 million users, almost double the amount of people on the app in April.

Presumably many have arrived in the days following Trump’s announcement. This moment in the sun for Parler comes courtesy of the president’s on-going feud with Facebook and, especially, Twitter over what he and other conservatives see as censorship and unfair treatment. That tension has grown recently after Twitter applied fact check and explanatory labels on several of Trump’s tweets; Facebook now appears poised to do something similar. Trump has already threatened the social media industry with increased regulation. And he may go a step further than that and move his own digital presence—a key factor in his 2016 victory—over to an app like Parler. It has been a home for the right since its beginning, and it’s an ideal spot for the president’s fiery words given Matze’s devoutly laissez faire attitude toward speech. 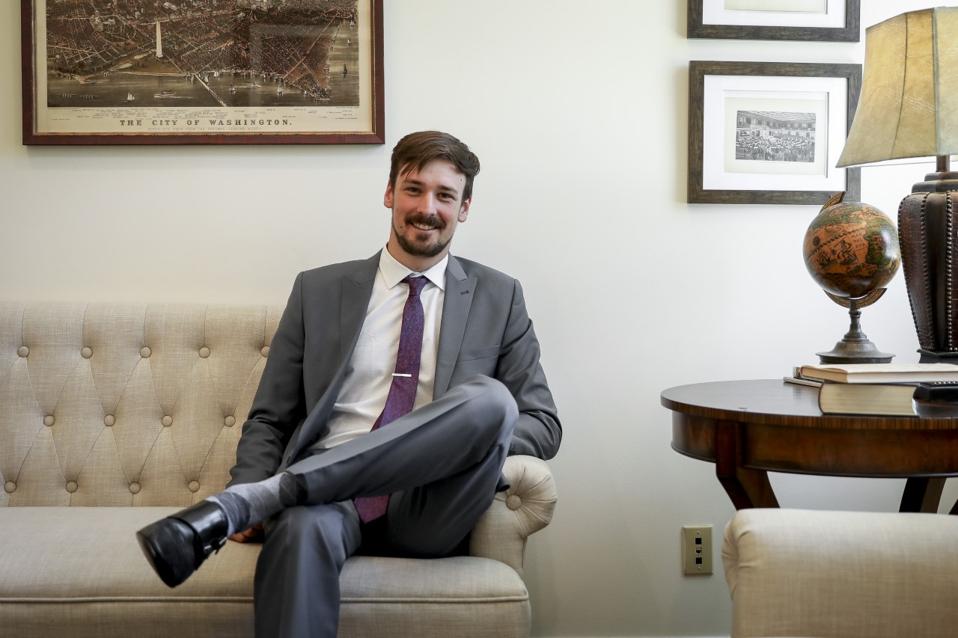 “I’ve been talking about free speech for a while before it was cool,” says John Matze, 27, the … [+] founder of Parler, a new social media app. “I guess that makes me a hipster.”

“There are going to be no fact checkers. You’re not going to be told what to think and what to say. A police officer isn’t going to arrest you if you say the wrong opinion,” says Matze, 27. “I think that’s all people want. That’s what they like.”

Matze has been weighing these thoughts for some time, stretching back to his time as a University of Denver undergrad, where he studied math, German and business. He found himself leaning a lot toward the conservative economist Thomas Sowell (“very logical”), and he also digs the classic libertarian lodestar Ayn Rand (“very interesting”). Matze describes himself as an arguer. “I don’t have too many friends, but the ones I do have, we just talk amongst ourselves about ideas—crazy ones, easy ones, whatever.”

After graduating in 2014, he took shorts gigs as a software developer at number of companies, including a few months at Amazon AMZN . Matze was never into “big central points of authority,” and this included bosses. So he struck out on his own in 2018, raising some angel round money from friends to begin Parler (he won’t say exactly how much).

At the start, the app got a number of lucky boosts. During a networking lunch in 2018, Matze struck up a conversation with Candace Owens, the conservative activist, who promptly began encouraging people to join Parler. By the following June, it had about 200,000 users, a figure that doubled almost overnight when hundreds of thousands of Saudi Arabian dissidents deserted Twitter for Parler, unhappy with what they saw as Twitter protecting the Saudi government. Media outlets including Reuters, Slate and The Daily Beast reported on the exodus, helping Parler keep growing.

Parler functions like a barebones Twitter with users (such as the Trumps and Giuliani) to follow and a feed to see their posts. True to Matze’s hands-off stance, the feed flows chronologically—unlike Twitter’s algorithm-based one. As for the exact rules, Matze is still figuring out which ones should apply, setting up an uncertain landscape that could be stampeded over if Trump carries through on his threat and switches to Parler. For instance, when asked if there ever might be an instance when the N-word would be appropriate, Matze has this answer: “It depends on the context. If they just said that word alone, I don’t think we would touch it.” He thinks a couple minutes longer, then restates his opinion. “If somebody came on there and said the N-word to somebody, and they got very upset as a result of that, then it would get taken down.”

Matze is also just initially considering how Parler might make money. His plan: lure conservative influencers onto the platform, then help match them up with advertisers, taking a cut of the what the influencers charge the advertisers to shill their products. To encourage ads, he hopes to be able to offer up a legion of super engaged users—ones like himself. “I’ve been kind of on my own island on Parler for a while. I don’t watch TV. I don’t do anything. I get everything off Parler.”