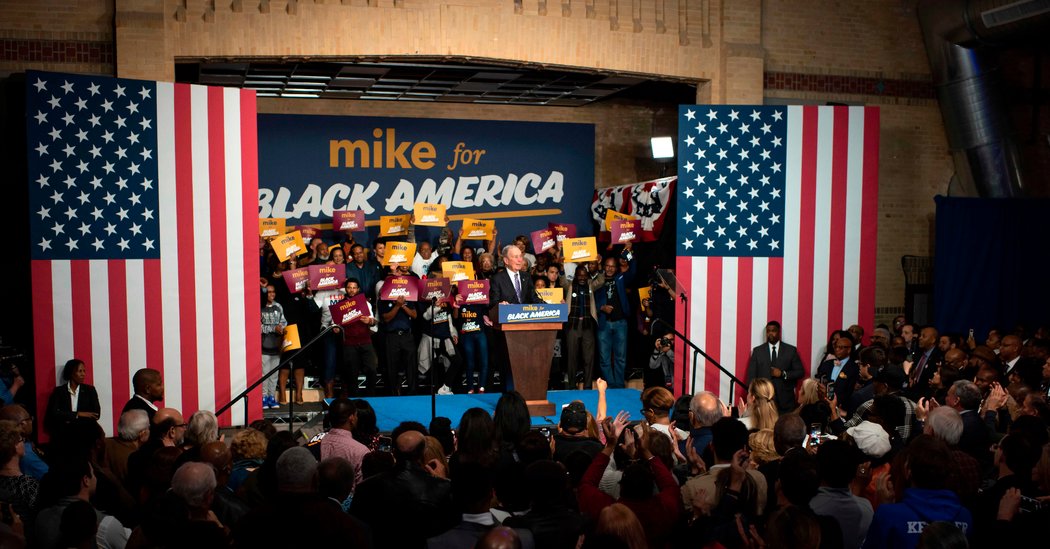 HOUSTON — It hadn’t even been a full day since a 12-year-old video surfaced of Michael R. Bloomberg showing him linking the 2008 financial crisis to the end of redlining, a practice that allowed banks to declare low-income, mostly minority neighborhoods off-limits for loans.

But as the criticism swelled over his record on race and inequality, Mr. Bloomberg was in Houston cutting the ribbon on a new initiative for his presidential campaign called “Mike for Black America.” Mayor Sylvester Turner of Houston, whose endorsement Mr. Bloomberg had pursued for weeks, delivered an impassioned speech, as did the mayors of Columbia, S.C., and Washington, both of whom are also helping Mr. Bloomberg with his African-American outreach.

“You don’t judge people by the mistakes they have made,” Mr. Turner declared. “You judge them by their ability to fess up.”

For the past two months, Mr. Bloomberg’s presidential campaign has been lining up endorsements, adjusting its messages to voters and expanding its reach across the country with an eye toward the moment it knew would come: when Mr. Bloomberg, the 78-year-old multibillionaire and former mayor of New York, would no longer be an afterthought in the race but a prime target, and decades worth of impolitic and insensitive remarks — as well as problematic policy stances — would face renewed scrutiny.

That moment is now here, presenting Mr. Bloomberg with the kind of political crucible he has not faced since 2009, when he last ran for public office. Over the weekend, the concern about Mr. Bloomberg’s ascendancy was evident as rival Democrats campaigning in Nevada unleashed a barrage of attacks on the former mayor, including familiar laments that he was trying to buy an election and new criticism aided by resurfaced videos that invoked his past controversies.

Speaking in Las Vegas, Senator Bernie Sanders of Vermont devoted an entire portion of his speech to Mr. Bloomberg, accusing him of supporting “racist policies” like the so-called stop-and-frisk searches of young minority men and attacking him for opposing minimum wage increases in the past.

Former Vice President Joseph R. Biden said in an interview on NBC’s “Meet the Press” on Sunday, “Sixty billion dollars can buy you a lot of advertising, but it can’t erase your record.” And he appeared relieved that the scrutiny had shifted from him to Mr. Bloomberg. “You all are going to start focusing on him like you have on me,” Mr. Biden said.

Mr. Bloomberg is skipping the first four nominating contests, including the Nevada caucuses on Saturday, and instead will join the race on Super Tuesday, on March 3. The two weeks leading up to those contests figure to be the most intense and trying for him so far — not just because of the attacks that are certain to keep coming but because they will test the resolve and restraint of a candidate who has never displayed much patience when confronted with criticism.

“He’s not a career politician,” said the Columbia mayor, Stephen Benjamin, who is also Mr. Bloomberg’s campaign co-chairman. Citing what he said was the campaign’s internal polling of Super Tuesday states, which showed Mr. Bloomberg leading in Arkansas and in second or third place in North Carolina and Texas, Mr. Benjamin said: “That’s when arrows start flying. That’s when the daggers come out.

“But you’ve got to be able to show the resilience to take the arrows.”

The excavation of Mr. Bloomberg’s past has accelerated as the former mayor’s unorthodox candidacy begins to appear more plausible. In just the past week four different sets of remarks have surfaced in which he demonstrates a lack of tact in dealing with questions of racial discrimination. Within 24 hours alone there were the comments on redlining and a second tape from 2015 in which he unapologetically defends stop-and-frisk policing in New York City’s minority neighborhoods — “Because that’s where all the crime is,” he said. He apologized for the practice in November, a week before he entered the presidential race.

After each instance he was ready with a retort. When news of the stop-and-frisk comments broke, a group of 20 African-American faith leaders happened to be at the Bloomberg campaign headquarters for a previously scheduled meeting. They agreed to release a joint statement defending him.

His rivals have spent nearly all of their time and resources battling one another in early-voting states like Iowa and New Hampshire, while Mr. Bloomberg has spent hundreds of millions of dollars building up his image with advertising and campaign rallies in states where has had the field largely to himself.

Mr. Bloomberg hopes the campaign he has built in less than three months will armor him against these kinds of attacks. Operating in what was essentially a vacuum for so long has allowed him to introduce himself on his own terms to voters who knew little about him.

“There was not a lot of well-defined understanding of Bloomberg outside of ‘He was once mayor of New York and he’s rich,’” said Cornell Belcher, a former aide to President Barack Obama who is advising Mr. Bloomberg on strategy and polling. “The campaign has done a good job of getting in early and defining him,” Mr. Belcher added, while Mr. Bloomberg “had all the March states to himself.”

With African-American voters specifically, his campaign has highlighted parts of his biography that are likely to resonate, like his relationship with Mr. Obama. Campaign ads feature Mr. Bloomberg’s work to expand My Brother’s Keeper, an initiative by the Obama administration supporting boys and young men of color, and his efforts to reduce gun violence by requiring more scrutiny for arms purchases. The campaign also emphasizes his apology for the stop-and-frisk program.

Mr. Bloomberg’s events across the South last week drew large crowds — more than 1,000 people were in attendance at separate events in Nashville and Chattanooga, Tenn.— and often included large numbers of African-Americans. In interviews, many voters were aware that the issue of his record on racial discrimination was in the news. But they also cited the former mayor’s work with Mr. Obama and his gun control campaigns. And while his record on policing was a sore spot, some gave him credit for apologizing.

“He came out and apologized and said that’s not the kind of policy I would support as president,” said Sheree Johnson, 35, an educator who attended Mr. Bloomberg’s event in Houston. “The Christian in me says to forgive him for that. He acknowledged it. He was wrong.”

Dwight Smith, who works with the N.A.A.C.P. in Chattanooga and attended Mr. Bloomberg’s rally there, said he believed many black voters were focused more on the bigger-picture goal of beating President Trump than they were on blemishes in any candidate’s past. “Everybody makes mistakes,” Mr. Smith said. “And if you look at the mistakes Donald Trump has made versus the mistakes Mike Bloomberg has made, I think people are willing to let it go.”

Not everyone, though. Benjamin Dixon, an African-American podcaster, has shared on Twitter Mr. Bloomberg’s previous comments supporting stop-and-frisk with the hashtag #BloombergIsARacist. That sort of criticism is indicative of the kind of resistance Mr. Bloomberg will most likely continue to encounter.

However, Mr. Belcher said the sentiments of the activist community and the political punditry were often not a good proxy for how a majority of black voters consider matters like these. “Lord knows if African-Americans had absolute purity tests for people who had problematic issues in the past, we would never advance as people,” he said.